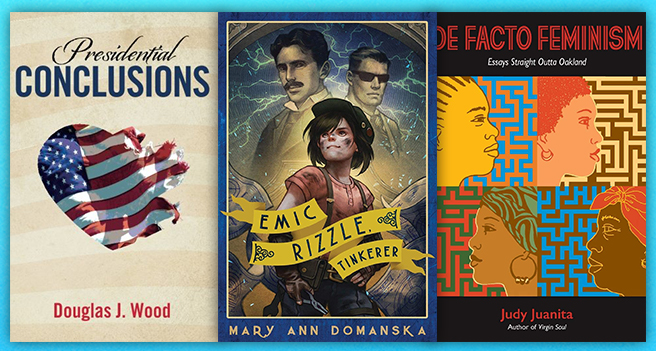 Your book is ready for publication, but how do you make your work stand out from the crowd? It all starts with a visually striking cover. We spoke to three authors about their cover-creation processes, touching on issues of cost, creative control, and artistic satisfaction. Two interviewees took the self-publishing route; the other was published traditionally. All ended up with notable covers that jump off the shelves—and off the screen.

Douglas J. Wood self-published the third and latest novel in his political-thriller series, Presidential Conclusions, in 2017. Kirkus called it “a sharp tale of government and terrorism fortified by an exceptional POTUS protagonist.” Wood’s cover-design experience was a family affair. As with his two previous series installments, the cover design was a joint effort between CreateSpace and Ruckus Marketing, a creative agency he said that he uses mainly “for the websites and social media platforms supporting the books.” Ruckus’s CEO is Josh Wood, the author’s son. “I only wish he owned Amazon!” Wood joked.

This arrangement allowed the novelist to have a great deal of input on the cover’s creative direction. “All the covers are variations of the flag embedded in a visual that represents the main character, Samantha Harrison, and the challenges she faces,” he said, which, in this book, includes a terrorist threat. For the latest cover in the series, Wood noted, “I must have rejected a half dozen ideas!” But in the end, he was able to go with his own concept, involving an image of a heart. The total combined costs of the cover design came to roughly $1,500, he estimated.

He was “very pleased” by Ruckus’s and CreateSpace’s results, he said. “The covers are intended to reflect something about the main character … and the impact of her decisions,” he pointed out. “In Presidential Conclusions, she has been elected to the presidency and faces heartbreaking decisions. Decisions that could tear the nation apart. Hence the design. I think it conveys exactly what I wanted.”

Mary Ann Domanska traditionally published her YA book Emic Rizzle, Tinkerer with small publisher Lethe Press, and Kirkus later named it one of the best Indie books of 2017. Its story follows the adventures of a tech-minded tween girl investigating a mystery in North Carolina, as shadowy men follow her. “Let’s hope for more from Domanska,” Kirkus’s reviewer said, “as Emic the inventor is a very appealing invention herself.” The illustrated cover features the titular protagonist, with Nikola Tesla (a key element of the mystery) and one the aforementioned mystery men in the background. The result, designed by Inkspiral Design and illustrated by Reiko Murakami, is a truly snappy presentation with a steampunk-ish feel.

Lethe Press, Domanska said, covered all the costs of the design themselves. They included her in the process from the start, although the amount of direct collaboration was relatively limited. “I was able to give some feedback on the first series of sketches,” she said. “The decision was ultimately up to the publisher ,but he forwarded any thoughts or suggestions I had on to the illustrator for consideration.”

The final cover draws heavily on the artist’s style, which Domanska noted has “a superhero quality to it.” More important, though, it achieved the effect that the author had in mind. “I wanted to show that my main character, Emic Rizzle, is a brave, quirky adolescent girl; not afraid to get a little dirty; and independent,” she said. “I believe the cover strongly conveys these characteristics.”

Rolling with the Changes

De Facto Feminism’s vivid cover, which depicts images of four African American women, was designed by Shelley Harper at Harper Design Group and illustrated by Peggy Mocine. Like Wood, she decided to collaborate with someone she knew: “I had seen and admired Shelley Harper’s designs and knew her personally,” she said. She didn’t know Mocine, but Harper had worked with her before, and the author “trusted her judgment, knowing that I had veto power.”

Juanita said that she wanted the cover to make readers “instantly feel the book was covering and ennobling the harsher aspects of being a black woman.”After she traditionally published her first novel, Virgin Soul, with Viking in 2013, to positive reviews, she said that she was “determined to make use of its success” for her latest work. “For me, that meant having a book that had a spine, and a cover that looked first rate,” she said. “I’ve seen so many self-published efforts that looked too plain or cheap and knew they registered visually with me as a no-no. The frugality seemed to say, ‘I was in a pinch and didn’t have money to pull this together. But my content will wow you.’ I am very proud to present my book at readings, book signings, etc., and to mail ARCs [advance readers’ copies].”

During the cover’s creation, Juanita had what she called “extensive input from beginning to end,” right down to the smallest details. Mocine, after reading the book, initially submitted six different cover ideas. “After I settled on one of four women in profile, the artist and I continued to refine it,” Juanita said. “The faces of four black women were too much alike, I felt. So I gathered profile shots of black women, particularly Nina Simone, Mahalia Jackson, and several other anonymous black women, with their mouths open mid-song, and sent them to the artist. She modified the mouths and noses, particularly, and other facial spots (chins, ears, foreheads, and the hair/scarf details). Shelley and I then worked on the color scheme, going through several iterations.”

At a late stage, she decided to change the book’s title from Labyrinthine, after one of the collected essays: “I realized the word Labyrinthine was not only a tongue twister but rather vague,” she said, “whereas De Facto Feminism hits the eye and brain instantly.”

This entire process cost $1,600, in part due to her many alterations. But it was all worth it, she said. “Next time, I’ll wait on commissioning artwork until I make more of a final decision,” she noted, adding, “I learned a lot, though, and will economize greatly from here on.”