A Trip to the Underworld with Kendare Blake 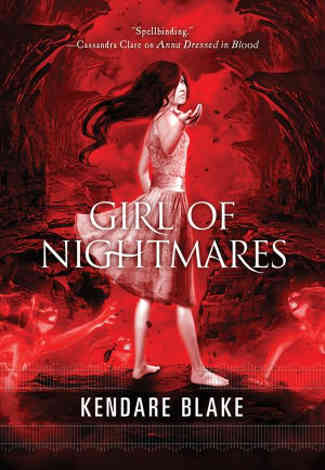 If you still* haven’t read Kendare Blake’s Anna Dressed in Blood, you may want to do that before reading what I have to say about the sequel, Girl of Nightmares. Because, you know. Spoilers. If you’re a fan of Supernatural or Buffy, though, you really must give the duology a try. Like both shows, it’s a fabulous combination of gore, humor, wit and intense creepiness that recognizes genre conventions while still being emotionally truthful about friendship, love, loss and sacrifice. To top it off, both books are printed in rust-colored ink: the color of blood.

If you haven’t even heard of Anna Dressed in Blood and you don’t mind spoilers, here’s the short version**: Seventeen-year-old ghost hunter Cas Lowood moves to Thunder Bay, Ontario, to dispose of the title character, a murderous ghost. Rather than dispatching her, he ends up befriending her—and, for the first time, a few people his own age. Together, they defeat the Super Big Bad who killed Cas’ father. Or, rather, Anna defeats the Obeahman by sacrificing herself to drag him down into Hell, which, as you would expect, is a one-way trip.

Read the latest Bookshelves of Doom on Tessa Gratton’s ‘The Blood Keeper.’

Or is it? Girl of Nightmares opens six months later. Understandably, Cas is still moping. But then, he starts seeing Anna. Not in a wistfully-misty-Thomas-Kinkade sort of way, but a screaming-in-unending-torture sort of way. Cas becomes convinced that not only is she trapped with the Obeahman, but that there has to be a way to rescue her. So he sets out to open a door into Hell in order to bring her back.

Girl of Nightmares shares all of Anna’s positives, but here are my two very favorite aspects:

Cas’ voice. As in the first book, his voice ranges from world-weary noir PI (“I wasn’t ready for so many months of cold. It clamps around the city like a fist.”) to pop-culture aficionado (“The stranded traveler act works more often than you’d think. Which is why it shows up in so many horror movies.”) to a combination of the two (“...the most intense game of dead-girl whack-a-mole ever...”). Like the rest of the book, he’s smart, funny, honest and a little bit emo***.

The mythology. It’s not just the movie references, though those are huge fun. It’s that Blake pulls from lots of different traditions—Finnish, Scottish, American, Voodoo, Greek—to create the mythology of the book. It all integrates so seamlessly that it’s easy to imagine Cas’ understanding of his own world is a very tiny corner of the whole picture. Also, Cas’ first name, Theseus, proves to be especially apt given his namesake’s ties to the Underworld, as well as the labyrinthine nature—both literal and metaphorical—of Cas’ journey.

The blurb on the front cover—from Kirkus’ starred review—compares Blake to Stephen King. I buy that. But I actually think she reads more like King’s son, Joe Hill: tighter, more modern and more cinematic. Either way, good stuff, and highly recommended.

***Which is totally fair, as the love of his life is stuck in Hell! He and Buffy should start a support group.

Let's be honest. If she isn't writing Bookshelves of Doom or doing her librarian thing, Leila Roy is most likely being tragically unproductive due to the shiny lure of Pinterest.