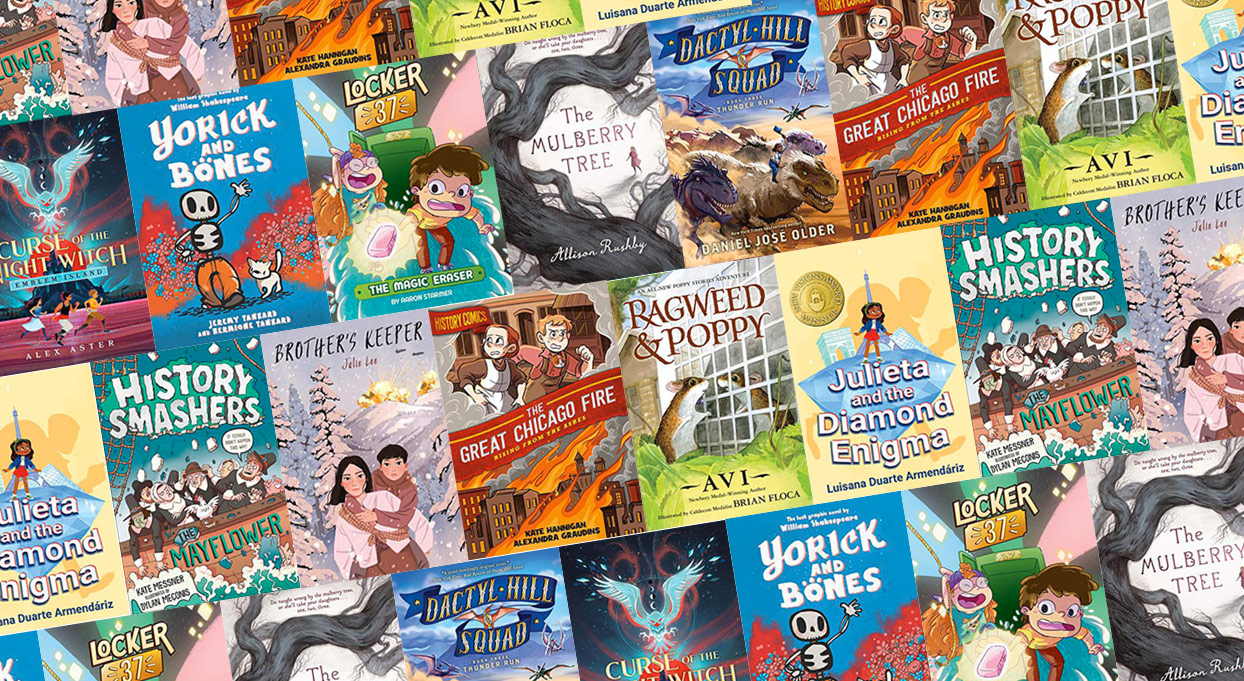 Have a middle-grade kid in the house all summer? Suggest these books for summer escapes.

Curse of the Night Witch by Alex Aster (Sourcebooks Young Readers, June 9): The emblem on his skin marks Tor Luna for leadership, but he doesn’t want it. When he wishes for a water-breather’s emblem instead, he receives the Night Witch’s curse and embarks on a thrilling quest to reverse it. Drawing on real Latin American folktales, debut novelist Aster has crafted an utterly magical fantasy.

Ragweed Poppy by Avi; illustrated by Brian Floca (Harper/HarperCollins, June 9): Readers of Avi’s Poppy stories will be delighted by this look at how the beloved mouse character met the charismatic Ragweed. Punctuated by illustrator Floca’s graceful black-and-white vignettes, this return to Dimwood Forest is an immensely satisfying one.

Julieta and the Diamond Enigma by Luisana Duarte Armendáriz (Tu Books, June 9): When 9-year-old Julieta’s museum-curator dad takes her on a business trip to Paris, she promises to stay out of trouble—but it finds her when the Regent Diamond is stolen. This debut by Duarte Amendáriz (a Kirkus contributor) is a smart, fast-paced chapter-book mystery with an appealing Mexican American protagonist, just right for younger summer readers.

The Great Chicago Fire by Kate Hannigan and Alexandra Graudins (First Second, June 30): Two young Chicagoans—Irish immigrants Franny and John Patrick Fitzgerald—find themselves in the thick of its chaos in 1871, then visit the Colombian Exposition 22 years later. Telling the tale from their perspective, author Hannigan and illustrator Graudins use a graphic-novel storyline to immerse young readers in the disaster and to observe the city’s response to it.

Brother’s Keeper by Julie Lee (Holiday House, July 21): In 1950, 12-year-old Sora and her younger brother race to cross the 38th parallel before it closes, trapping them in North Korea. Their perilous wintertime flight makes for gripping reading even as it offers important historical context to young readers about the world they occupy 70 years later.

The Mayflower by Kate Messner; illustrated by Dylan Meconis (Random House, July 7): Readers who might think they know everything there is to know about the Pilgrims will find themselves endlessly enlightened in this funny, collegial, myth-busting opener to the History Smashers series, enlivened by Meconis’ comic-strip–style interludes.

Thunder Run by Daniel José Older (Scholastic, June 2): Led by Afro-Cuban Magdalys, the dinosaur-riding orphans of the Dactyl Hill Squad are back, moving from the front lines of the Civil War to a lovingly realized New Orleans to Mexico. As always, Older challenges readers to confront contemporary issues of justice and inequity even as they fly through the pages.

The Mulberry Tree by Allison Rushby (Candlewick, July 14): The tree in the backyard of the house that Immy and her family are renting while her father battles debilitating depression has a strange, brooding presence. Could it possibly be true that it’s responsible for the disappearance of two local girls, as legend has it? The tree is both actor and metaphor in this chiller.

The Magic Eraser by Aaron Starmer; illustrated by Courtney La Forest (Penguin Workshop, July 7): Carson calls on the magical powers of locker 37 to help him with a stain on his pants, but all he gets is an eraser that when rubbed three times can make anything disappear: part of the wall, a toilet, even the class bully. Illustrator La Forest’s appropriately madcap illustrations amplify the silliness of Starmer’s engaging premise.

Yorick and Bones by Jeremy Tankard and Hermione Tankard; illustrated by Jeremy Tankard (HarperAlley, May 19): When mild-mannered skeleton Yorick is accidentally reanimated, he is then exhumed by a small dog. Gratitude turns to irritation when the dog instantly begins chewing on Yorick, but this graphic novel eventually turns into a sweet buddy story, enriched by Yorick’s amusingly antique speech.