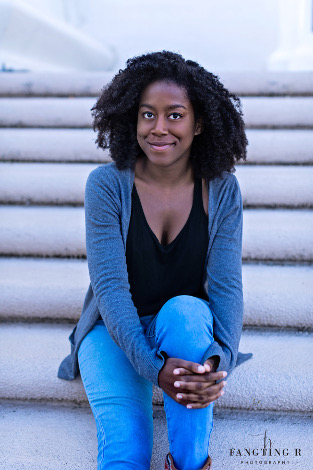 “You don’t often get to see black people do magic,” says bestselling Nigerian-American author Tomi Adeyemi. Her debut YA fantasy novel, Children of Blood and Bone, takes us to the magical world of the Orïsha, the deities of the Yoruba people in Nigeria, where her protagonists must fight to restore magic to the land and find themselves along the way. Adeyemi weaves a highly complex, magnetic, and otherworldly setting in which readers bask.

Zélie, a 17-year-old girl, has unusually bright white hair. In her world, that means that she’s a diviner, an individual with the potential to become a maji, a strong magician with special powers. Unfortunately, King Saran killed many of her people during his rise to power, effectively destroying magic throughout the kingdom in the process. As the novel opens, Zélie is practicing self-defense in the event that another invasion and genocide occurs. This is common practice for her and those in her community in the novel, which has become a runaway bestseller. The king’s men come regularly to collect unfair (and arbitrary) taxes whenever they please, even multiple times a month; they have their way with the women; and senselessly beat the diviners up. Needless to say, it’s a world that very much needs magic, however spiritual or tangible it may be.

The maji, when they were powerful, followed the orders of the deities in the Orïsha. These deities, as they are conceived in the real-world Yoruba community, can take any shape or form, be it of a power itself or of a physical, anthropomorphized individual—and these qualities have been transferred to the novel. “It’s a common thing in fantasy to have a system of gods and have the magic come from those powers,” says Adeyemi, “but we don’t have books about the Orïsha, so even though it’s something that we’re used to, we’re not used to seeing those types of gods and these types of powers.” The maji are divided into countless groups: the Healers, the Reapers, the Seers, the Burners, each with a very specific power.

When Amari, the king’s daughter, escapes with a sacred scroll (part of a ritual that can bring back magic), she teams up with Zélie and her brother, Tzain, to find the missing parts of the ritual. The three embark on an incredible adventure, though it is punctuated with systematic demonstrations of oppressed communities suffering from arbitrary cruelty and discrimination from those in power.

Though a princess and supposed enemy to the diviner community, Amari quickly realizes that her father’s ideologies were rooted in injustice and racism. Most of all, she realizes that her father is overwhelmingly afraid of the prospective power and force of will other citizens may have, effectively giving him a reason to deny them their right to exert it. Conversely, Zélie’s father, Baba, pushes her to fight against the structures of authority and restore magic to the people, regardless of whether he survives while he waits. Each father offers his own sacrifice; each father arrives with untold baggage. Inan, King Saran’s son and Amari’s brother, is tasked to go after them and bring back the scroll at all costs, even if that means taking his sister’s life.

Though the stakes are more epic than these familial complications, it’s family that grounds the book in the reader’s reality. “I don’t know if Victoria Aveyard said this but that’s where I first heard it: ‘You can make people believe one unbelievable thing. Everything else has to be really grounded.’ For me, there’s nothing more grounded than familial relationships, parental relationships. It’s really universal; everything has to go through these relationships,” says Adeyemi.

Grounding the work in the present lives of her readers is paramount to Adeyemi, who, in a sobering author’s note, explains her motives behind writing Children. After taking her readers through her magical world, Adeyemi places the book in today’s state of affairs. “I couldn’t let readers just go,” she says.

“The story doesn’t get to be just that. It isn’t just that. It is about real people, real pain, and the real problems that we are facing today. I don’t get to just live in a fantasy, nor do the people who look like me.” It’s with a beautiful balance and mastery that Adeyemi sheds light on racism today by way of a fantasy world that is scarred with societywide wounds that mirror ours. Sometimes we read fantasy to forget about the world we physically inhabit; other times, the fantasy makes us aware that the two are not mutually exclusive and that the one presupposes the other.

As a fellow in Brazil studying West African culture and mythology, Adeyemi stumbled upon a giftshop where African gods and goddesses were depicted in their traditional forms. Immediately, this made her think of all the stories that weren’t being told with these characters at the forefront and how many lives were erased from history as a consequence. “A lot of things need to be said. They need to be said explicitly,” she explains. “I think they need to be said within the book. I can say everything I want in an interview, but it doesn’t mean someone is going to see that interview. It’s in the book. It’s on the page, or it’s not there.”

Michael Valinsky is a writer from Paris and New York. His work has been published in Paper Magazine, them, Hyperallergic, Los Angeles Review of Books, OUT Magazine, and BOMB Magazine, among others. He currently lives in Los Angeles.