The Picture Books That Captured a Movement 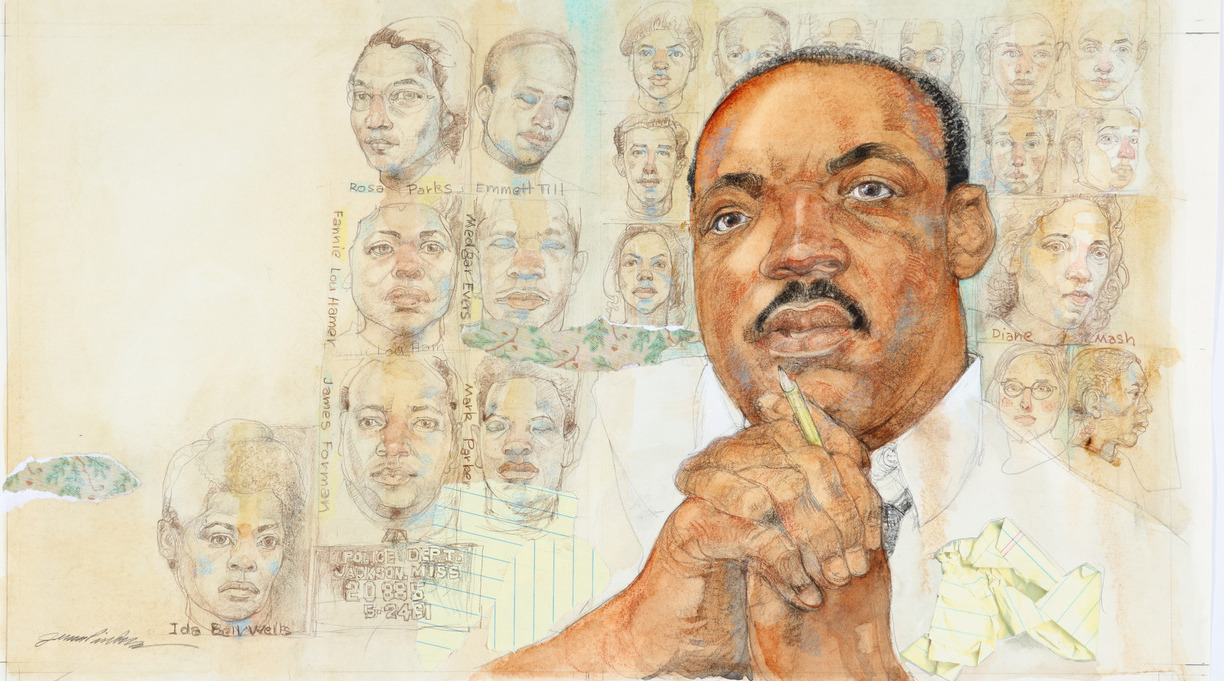 Illustration by Jerry Pinkney from ‘A Place to Land’ by Barry Wittenstein (Neal Porter/Holiday House, 2019)

I recently had the pleasure of attending an inspiring new exhibition at the New-York Historical Society in Manhattan. “Picture the Dream: The Story of the Civil Rights Movement Through Picture Books,” curated by award-winning author Andrea Davis Pinkney, shows how children’s books have depicted the civil rights struggle in America through the power and immediate appeal of art. The show is a stunner.

Eighty works by 40 artists hang on the walls of three galleries. You’ll likely recognize pictures from many of the classics of the last few decades: A Wreath for Emmett Till by Marilyn Nelson, illustrated by Phillippe Lardy; A Place To Land by Barry Wittenstein, illustrated by Jerry Pinkney; If a Bus Could Talk: The Story of Rosa Parks by Faith Ringgold; and Child of the Civil Rights Movement by Paula Young Shelton, illustrated by Raul Colón are just a few of the 60 books represented here. Seeing these illustrations outside the pages of a book—and in many cases at a scale larger than a book’s trim size—gives them added impact, reminding the viewer that these are works of art, full stop.

The exhibition is divided into three thematic sections. “The Backward Path” details the realities of life under Jim Crow segregation, including separate water fountains for Blacks and Whites, the challenges of interstate travel for Black Americans, and lynchings like that of Emmett Till. “This exhibit does not sugarcoat,” explains curator Pinkney. “The Rocks Are the Road” highlights the work of the civil rights movement such as marches, freedom rides, and lunch counter sit-ins. Pinkney wanted to emphasize the central role of young people in this activism. Finally, “Today’s Journey” connects the earlier struggle with present-day activism such as the Black Lives Matter movement and reflects the “opening up of publishing today to a diversity of voices,” Pinkney says.

That diversity is precisely what we aim to celebrate in our fourth annual Diversity Issue, out May 1. Exhibitions like “Picture the Dream” remind us that children’s literature has an important role to play—not just in capturing a wide range of human experiences on the page, but in chronicling our history and our struggle. In their own way, these children’s books are as vital as documentaries such as Eyes on the Prize or histories like Taylor Branch’s Parting the Waters and its sequels.

Why else would diverse books be the target of a campaign of censorship that has seen books on race and racism, as well as LGBTQ+ themes, challenged and banned across the country? A new report by PEN/America, “Banned in the USA,” offers alarming details about right-wing efforts to keep such books out of the hands of young people. The report found 1,145 titles by 874 different authors, 198 illustrators, and 9 translators impacted by such efforts in the nine months from July 1, 2021, to March 31, 2022. Book bans were initiated in 86 school districts in 26 states, accounting for 2,899 schools with a combined enrollment of more than 2 million students.

Clearly, exhibits like “Picture the Dream” play a crucial role in commemorating the very books—and history—that are under attack in so many places. (It’s on view at the Historical Society through July 24.) Our Diversity Issue has a role to play, too. And we will continue to celebrate the diversity of literature in all our issues, year-round.