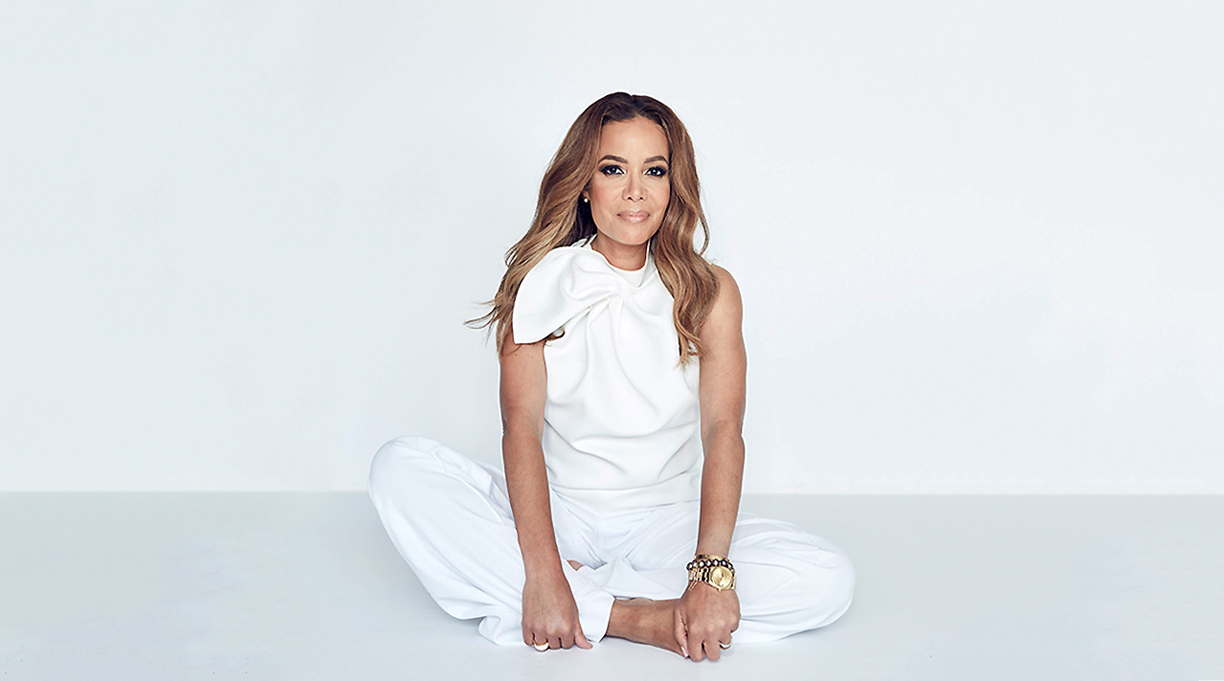 You know Sunny Hostin best from The View, where she elegantly spars with co-hosts Whoopie Goldberg, Sara Haines, and Joy Behar (who gives her advice “more than occasionally”). An attorney who has worked as a public defender, Hostin began her media career on Court TV and continues to report for ABC News as a senior legal analyst and correspondent. However, Hostin also established herself as a writer with her 2020 memoir, I Am These Truths, and this year she’s releasing her first novel, Summer on the Bluffs (Morrow/HarperCollins, May 4), the saga of a wise older woman, her three goddaughters, and the Martha’s Vineyard home they all cherish. Hostin spoke over Zoom from her own home in New York state; the conversation has been edited for length and clarity.

My dad actually introduced me to the Vineyard because he used to work at Colgate Palmolive, and he would hear some of his colleagues discussing their homes there—and these were Black colleagues. He’d say, “I hope one day we’ll be able to get there, or at least you’ll be able to get there.” I was first invited on a trip to Oak Bluffs, the traditionally Black part of the island, by the Jack and Jill organization when I was a teenager. I mean, I was a kid from the South Bronx, and I got on the ferry and I saw all these African Americans—and they were wealthy. I’d never experienced anything like that. I kept returning, and once I got married, I introduced my husband to the Vineyard, and our kids have grown up going there. My book, if I’m honest, is a love letter to Martha’s Vineyard.

Your protagonist, Ama, brings together incredible people at her home, the Chateau LaVeau, named after Marie LaVeau from Ama’s home city of New Orleans.

It was one of the only places where African Americans were allowed to buy beachfront property, and so you had luminaries socializing, like Martin Luther King Jr., Dorothy West, so many others. Fast-forward and you have the Obamas there. My daughter recently made sure she didn’t have any basketball tournaments conflicting with her planned August stay because, suddenly, you’re in a place where you have the majority of kids who look like you. You don’t experience that anywhere else.

Tell us more about Ama, the character at your book’s center.

Ama has worked hard for everything she has. She’s an elegant woman who is also complicated. And because she has worked hard and because she has been the first, and usually the only, Black woman in her positions—for example, as a trader on the floor of the New York Stock Exchange—I think it was really important for her that her house reflect someone who has earned the ability to have beautiful artwork, the ability to have luxurious fabrics. I wanted to show readers that this is a world in which wealthy African Americans do have and enjoy fine art and antiques.

Ama and her husband, Omar, are able to create community at a very high level and not simply because they are people of means, right?

At this point, I am invited to, and I host, these kinds of events, so I wanted to write about intentional community. We can be so attached to our devices, and sometimes, as in this past year, we’re afraid to be communal. Why have all of this wealth if you don’t share quality time with a community of people you love and respect? Tanya and Spike Lee, whose home I’ve visited on Martha’s Vineyard, do this so well. While the Obamas have to be a little more guarded, their children host parties that ours have attended, and Sasha has even worked at one of the local restaurants.

I don’t want to forget to ask you to talk about Omar. If Ama is the brains, he’s the beating heart of their intentional family.

That was important to me, because my father and I are very close, and he’s in many of the characters, but above all in Omar and Carter, whom readers will meet later in the book. What I love about them is that they’re not intimidated by strong, self-determined women. Omar is happy to let Ama shine, to let her stand up front, to support her. But he is not weak. He’s quite strong. He’s noble of character. He’s a man of few words, like my father and my husband.

You’re successful a few times over. Why a novel?

I always wanted to write not just one novel, but a lot of novels. I’m a voracious reader. I start a couple of books, then want to read another one, and then I bookmark that one and read something else. It’s really special to be able to create worlds and inhabit them. I dream a lot, vivid dreams, and I write them down and have been doing so since I was 12. I’m a natural storyteller, and that’s really what you do as a prosecutor, too. You tell stories.

How was writing fiction different from writing memoir?

Writing my memoir was a painful experience, because it’s hard to write about yourself! Writing this novel was pure joy. It was really special to be able to create worlds and inhabit them. One of the reasons I chose this type of book is because I was covering really sad stories, police shootings and protests, and I had to read a lot of background material. But when I fly, I like to read light stuff. I want to read like fun, fun things. And I would go into the bookstores and there was nothing that centered around women of color. Although it’s fiction, it is kind of based on my life, things I’ve experienced and my friends have experienced, including marital struggle, colorism, and career choices.

So much happens in Summer on the Bluffs that it seems there might be more to come?

Well, it is a three-book deal, so there’s definitely more to come. However, this time it will be set in Sag Harbor. You’ll see some of these characters but also some new ones. Olivia, one of my Bluffs characters, will find a wonderful father figure based on the de facto mayor of Sag Harbor, Bill Pickens, whom I know very well.

What else does Sunny Hostin do that we need to know about?

Part of the reason there’s so much food in Summer on the Bluffs is that I’m a cook and actually part owner in a Caribbean fusion/French/soul food restaurant called Alvin and Friends in New Rochelle, New York. It’s really a community place where people have their parties, their birthdays and bar mitzvahs, and more. But I have to mention the development company I’ve started, which is backed by Disney—not too shabby! Also, this novel has been picked up by ABC Studios and Octavia Spencer’s production studios to be made into a series. If I can help bring more Black joy into entertainment, I’m thrilled.

Bethanne Patrick reviews for a number of publications and is working on a memoir.