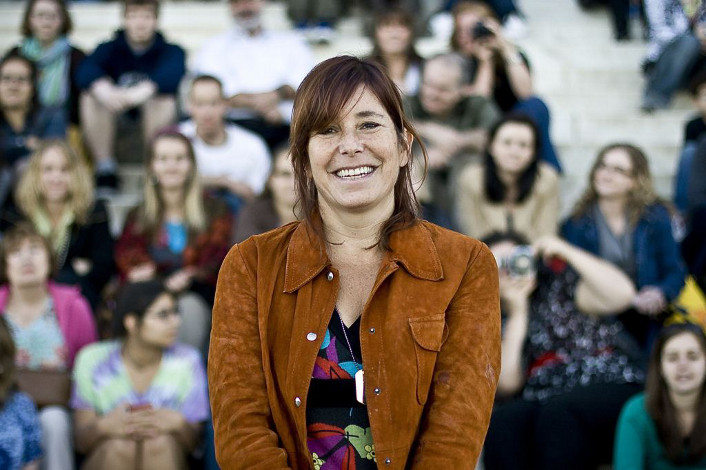 Amy Krouse Rosenthal and Tom Lichtenheld stand out, period. The New York Times best-selling team behind Duck! Rabbit! and three other children’s books has worked in close collaboration for six years—and in the industry, that makes them a bit anomalous. “My perception, anyway, is the author and the illustrator never meet or talk or collaborate, which to me is just odd, and the extent of Amy and my collaboration is unique to anyone else I work with,” says Lichtenheld.

Rosenthal and Lichtenheld both live in Chicago, famous for advertising and improv comedy. The way they work resembles both: to pitch, to workshop, to bandy ideas back and forth, to hone, and to finalize the best-possible product.

Their highly anticipated latest is Exclamation Mark. Its yolk-yellow hardcover blazons the eponymous main character, a dot smiling beneath the bold black plume that distinguishes him as much more than your run-of-the-mill period. Although his resembles the friendly faces of his period friends, that vertical dash sets him apart. At first, he does his best to conform by concealing it: by lying down to make a dash, by twisting it up like a corkscrew. But when a curvy question mark unleashes a salvo of interrogatives, the exclamation point finally finds out what that vertical line is all about: It gives him the power to holler “Stop!”

The arresting idea for the story came from Rosenthal. A mother of three, she’s often asked by fans if her children inspire her work, and in this case, that’s spot-on. “More often, it’s just everything around is inspiration in life—it’s hard for me to pinpoint where an idea came from. But in this case it was exactly a child of mine who generated this epiphany: My eldest, my son is an exclamation mark. It really meant something to me, it felt powerful, and I started to write the words,” says Rosenthal.

“He stood out from the very beginning,” the book begins.

Rosenthal bounced the idea off of Lichtenheld, and together, they decided that the introduction of the question mark was the crux. The question mark enables the exclamation point to discover his own uniqueness. Once that type was set, the narrative flowed at remarkable speed.

With the conception complete, Rosenthal and Lichtenheld beheld the emergence of the main point. “The other characters are never rejecting him. Other periods are very neutral or accepting, but his quandary is really self-imposed, which is a really nice little nuance to the message,” Lichtenheld says. “The world isn’t picking on us. The world might not even be aware that we feel odd.” Rosenthal agrees: “This story was pure, it was just about him and his journey. He’s not being bullied; he’s just confused like most people are on the path to adolescence. It’s about finding your way.”

Not only isn’t he bullied, he is celebrated by the others for his uncovered abilities. “Isn’t he something?” asks the question mark. “There was never any question in our minds,” chorus the periods.

The winning idea emerged from sessions over doodle-strewn tables in a Chicago coffeehouse. While, nominally, Rosenthal is the writer and Lichtenheld the illustrator, the lines blurred when it came to making Exclamation Mark a success. “When Tom and I work together it’s kind of like the labels fall away,” Rosenthal says. “Sometimes I’m the one doodling and Tom’s the one typing,” (although Rosenthal says that Lichtenheld’s writing abilities far surpass her drawing).

The book was crafted without a specific educational agenda—a fact that will be apparent and enticing to kids, who don’t like to be preached to. Young readers look for a compelling story, and Rosenthal and Lichtenheld aim to coax one from an image, a word, any little bit of inspiration to take and run with. “We have this mind meld. I think we get excited about the same things: a simple little twist of a line or a tiny word,” says Rosenthal. Both are big fans of books like CDB! by William Steig, those that play with language and seamlessly weave words with visuals. “Art is there in service of the idea, not just to be a pretty picture,” says Lichtenheld.

For that matter: why not Exclamation Point? "'Mark’ felt softer than the word ‘point.’ ‘Point’ felt...pointy. It worked out well: to go off and make your mark,” says Rosenthal. “The fact that it’s a person’s name, that’s kind of a little bonus,” Lichtenheld adds.

From the title to the fonts, the dialogue to the familiar penmanship-paper background, all small touches are in the service of inspiring and encouraging the reader to marvel. “This terrain is one big exclamation mark for us,” says Rosenthal. “We could just keep on gabbing about all this stuff.”

Megan Labrise is a freelance writer and columnist based in New York. Follow her on Twitter @mlabrise.