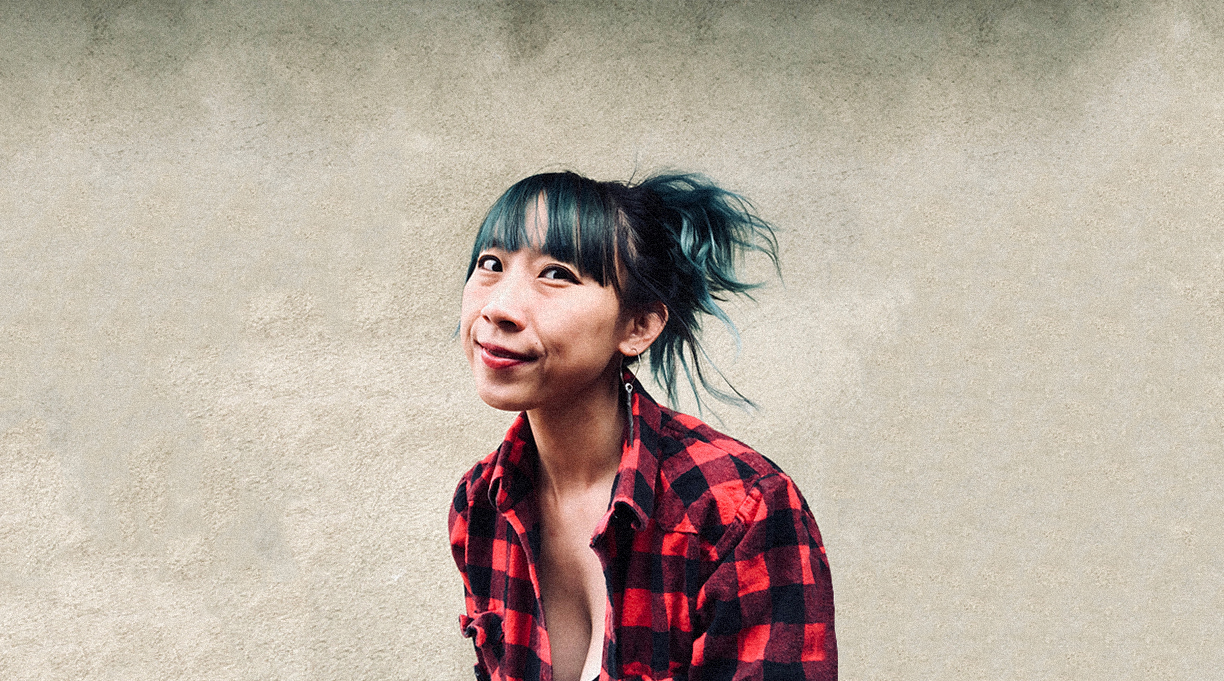 Installation artist and cartoonist Shing Yin Khor is the author of The American Dream?, a YA graphic memoir about the author’s experience traveling Route 66 with their dog. Their new graphic novel, The Legend of Auntie Po (Kokila, June 15), reimagines the folk logging hero Paul Bunyan, instead invoking Auntie Po and her water buffalo as protectors of a 19th-century logging camp. The story follows 13-year-old Mei on many adventures, from crushing on her best friend, Bee, to learning about her father and their Chinese heritage, and, eventually, dreaming of an education beyond the logging camp. Through Mei’s brilliant, inquisitive voice and the sweeping illustrations of the community around her, Khor revisits the story of one of America’s early industries to introduce a powerful new origin myth. We recently spoke with Khor on Zoom from their home in Los Angeles; the conversation has been edited for length and clarity.

The gods Auntie Po and her water buffalo, Pei Pei, look out for the loggers in Mei’s community. Who or what was your initial inspiration for these gods?

This started with a passion for Paul Bunyan. As I was doing research, I learned things my history classes had never taught me. Japanese people were a really significant part of the West Coast logging industry until Japanese internment. A lot of Chinese workers, after they built the railroads, moved on to other forms of labor, and the logging industry was a fairly common one. That definitely started me thinking: If you were a Chinese kid in a logging camp being exposed to the Paul Bunyan mythos, what would it be reinterpreted [as] in your head? Someone asked me yesterday if Auntie Po was based on anyone. This [picture of my grandmother] sits above my desk, and until I was asked that question, it didn’t really occur to me that, of course, this picture that I look at almost every single day would come through when I drew this elderly matriarch.

You write movingly about the hardships that Chinese people faced in the U.S. in the 19th century. How do you approach writing about violence and discrimination for young readers?

A lot of it is reflected in my own experience, where I felt I was sheltered quite a bit from the reality of violence and discrimination. Part of it is that I grew up in Malaysia—although I did immigrate to the United States when I was 16—but my parents, [and] the people around me, did a really good job of not making me feel different, not making me feel like there would ever be any danger in my life. Of course, that is a very different experience than a lot of other marginalized communities face, especially Black people, where you don’t have the privilege of being sheltered.

For Mei, her entire life is this logging camp. That’s all she knows; her dad is intent on sheltering her. There’s a moment in every child’s life where they realize that maybe not everything is great. I was writing a lot of the violence from Mei’s point of view, that slow realization that people that look like me get beaten up. What does it feel like, in that moment where your bubble starts to crack? There’s a scene where Mei fakes Pei Pei’s footsteps throughout camp in order to make the children happy. She wants them to have a distraction from the violence around them. A Black woman there, Martha, is like, “I know that you want the kids to feel safe, but it’s not really safe.” I think that’s very much about the different levels of privilege, what people are able to consider safe.

What I love so much is how food brings people together in this book.

I really want to center food and center joy, because the food is joyous. So much of writing about marginalized people is excavating trauma. It’s excavating stories about violence, especially with working-class communities—in this case, the Chinese labor class in this era. You don’t have a lot of data, you don’t have a lot of personal letters. I came across [a fact] that really shaped the entire book in one of the few academic works written about Chinese people in the logging industry in this era—­­it’s Sue Fawn Chung’s Chinese in the Woods. I learned that if you had a logging camp [with] a good cook, you had the ability to retain your workers much better. If you had a bad cook, your workers quit, and you wouldn’t be able to do the work. I learned that Chinese cooks were actually considered some of the best. Not only that, but they were often paid significantly more, [sometimes] double. This was an area that Chinese people were thriving in.

There’s a wonderful friendship and love between Mei and Bee. How did you first decide to incorporate this relationship as a romantic subplot?

That’s directly based on my own experience of crushing on an awful lot of best friends who are not remotely gay. I do think there are a lot of queer stories that are like, Can we have a happy ending? Why don’t they end up together? That’s what happens when you crush on your straight best friends. Mei is figuring out a lot of things, not just her sexuality. At the end of the day, her own sexuality might not even be at the top of that list. Bee’s a little older, about to leave for college, she cares for Mei a lot, and they’re best friends. Were this something taking place in our current era, there might have been more queer experimentation. But without the language to do it, [Bee] is not thinking of what queerness could be. They absolutely love each other, but sexuality isn’t really part of that relationship, because of the lack of language and because they’re very young.

Did you always envision Mei as a queer character? What has been your favorite part about writing a queer protagonist for young readers?

Mei was always queer in my head. She was always someone who was going to be figuring out her place in the world at all these different intersections. I think more than anything else, I wanted to write a queer character who was not defined by their queerness. Her story is about finding and accepting...that she’s not a sidekick to Bee’s story, that she is a whole person with her own stories to tell. When you’re writing as a marginalized person, a lot of times you [think], which marginalization, exactly, am I writing about, and for this book in particular, I feel like I got a lot of them in. That’s a very gratifying thing, that acceptance that not every single marginalization needs to be the forefront of the story.

Johanna Zwirner is the editorial assistant.