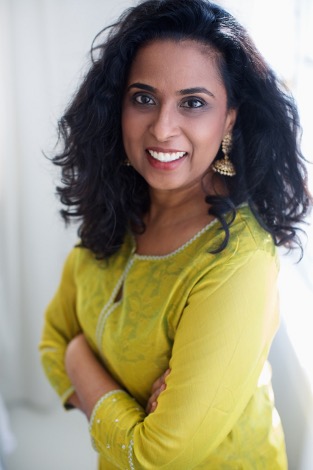 Sayantani DasGupta was a successful pediatrician and college professor before she started writing for kids. So how does a doctor end up writing an absurdist fantasy for kids? “Toni Morrison told me to!” she says. Not, unfortunately, literally: DasGupta has never met the Nobel laureate. Instead, she was inspired by a quote of Morrison’s: “If there's a book that you want to read, but it hasn't been written yet, then you must write it.”

Growing up the child of Bengali immigrants in Ohio (and later New Jersey), DasGupta loved reading but was disappointed that she never found characters who looked like her. As much as she related to A Wrinkle in Time’s Meg or Little Women’s Jo, the lack of positive representation wore her down. “There was a part of me that kept wanting to disappear or felt that I wasn’t worthy of being the hero of my own story,” she says, “and I didn’t want that experience for my children, for all of our children.”

By the time she did have kids of her own, DasGupta assumed these problems of representation had been solved. However, her son complained that the fantasy stories he loved never had characters that looked him—the books were dominated by white heroes like Harry Potter and Artemis Fowl. So DasGupta started coming up with her own stories to entertain him, retelling and riffing on the Bengali folktales she grew up with. It was only later that she wondered if other kids might also be interested in these tales.

The final result is the Kiranmala and the Kingdom Beyond series, which follows a New Jersey 12-year-old as she realizes her parents weren’t kidding when they insisted she was really an Indian princess. In the first book, The Serpent’s Secret (2018), Kiran has to race to save her parents from an imploding spell/star as she is introduced to the magical Kingdom Beyond, meets a few fellow royals, and learns about her heritage.

With the setting and characters introduced, the second book, The Game of Stars, leans into the Kingdom Beyond’s Wonderland-like absurdity. There are overly officious bureaucrats, punnily named products, and a game show to determine the hero of the realm. DasGupta was partially inspired by the long tradition of authors like Lewis Carroll and Norton Juster who use whimsical fantasy to engage kids with social commentary, but she was also responding to the increasing absurdity of the world around us. After all, she points out, “2018 felt a bit like a reality game show in itself.”

In particular, DasGupta wanted to respond to the heated discourse around immigration and discrimination. Kiran has to learn that people aren’t defined by what they are but by what they do. “Being a hero or a monster isn’t who you are or what community you’re from or what your skin color is or what you look like or who you worship,” DasGupta says. “It’s the choices you make every day.” That applies to every character in the book, from Kiran herself to the foolish human king to the complicated demon queen.

Though the book is never preachy, its moral aspect is important to DasGupta. “Not to get too goofy about it,” she says, “but, children’s books, they’re about giving kids the tools to build a better and more just future.”