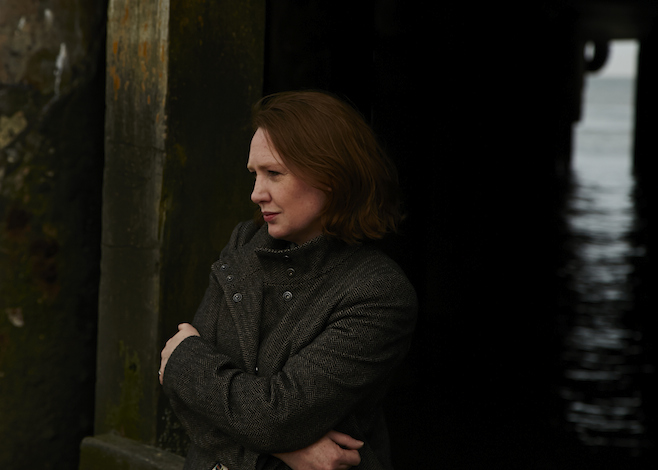 For years, Paula Hawkins lived on London’s fringe and commuted by train to a journalism job. Twice daily she passed the backs of the houses lining the tracks.

“I loved to be able to see inside,” she says. “Most of the time you’re looking at quite boring things. You’re looking at people’s kitchens and it’s like, There’s a nice kitchen, or whatever. But the thought did occur to me—it was a long time ago—what would you do if you saw something really weird or an act of violence? Would you tell anyone? Would you even be sure of what you could see?”

That’s the heart-quickening premise of Hawkins’s locomotive debut thriller The Girl on the Train. Rachel’s days are framed by a commute: to London every weekday morning, home to Ashbury every night. Recently divorced and often accompanied by a sackful of canned cocktails, she gazes out the window for glimpses into other, happier lives.

One particular house begins to overtake her reveries. She christens its inhabitants Jason and Jess, and imagines a full life for them.

That small comfort turns to horror one day, when Rachel witnesses a shocking scene at Jason and Jess’s—the prelude to a homicide investigation. Should she keep quiet or go to the police? Did she really see what she thinks she saw?

“I love the unreliable narrator,” Hawkins says. “I really like that idea that you’re never quite sure if you can trust what you’re being told. Obviously an alcoholic is a very good [vantage] in that respect, because not only is she unreliable to other people, she’s unreliable even to herself. She can’t trust her own judgment, her own memories. She’s an extreme example.”

Rachel’s drinking is so ex

treme that she often can’t remember what she’s done the day before. Sometimes it’s drunk dialing her ex-husband, who now lives with his new wife and baby daughter. When memories of her bad behavior flash, the shame comes in waves: “...the twist in the pit of my stomach, the anguish of shame, the heat coming to my face, my eyes squeezed tight as though I could make it all disappear. And I’ll be telling myself all day, it’s not the worst thing, is it?” she writes.

Her special knowledge of events involving Jason and Jess (whose real names are Scott and Megan Hipwell) may offer a much-desired shot at redemption. But as Rachel assesses her options, while attempting to puzzle out the mystery on her own, she may imperil herself and others. The smart, serious story that ensues should shock and satisfy genre devotees as well as literary fiction fans.

“[The Girl on the Train] is a psychological thriller that examines the fine line between normality and the loss of control that’s brought about by addiction. It’s about how, if you peel back the veneer of everyday life, you can reveal something really quite dark and sinister underneath,” Hawkins says.

It’s the psychology of the characters that made Hawkins a thriller fan. “What makes people behave in unusual and unexpected ways? The way people react to grief or anger or all those things that’s the backdrop to the act of violence that we write about. That’s the stuff that I find really compelling,” she says.

Hawkins no longer commutes, and is unlikely to return anytime soon. She’s working from home on a second novel that’s already sold, and DreamWorks has optioned The Girl on the Train for producer Mark Platt. However, she still finds inspiration in flickers of others’ lives.

“I think that even people who commute by car find themselves staring into other people’s cars at traffic lights, watching other people have arguments and whatnot—all that kind of stuff’s fantastic. Just walking down the street, you can see in when people have got their lights on, see what they’re doing at home...I’m obviously just incredibly nosy,” she says.