A Nighttime Stroll with Rafael Yockteng 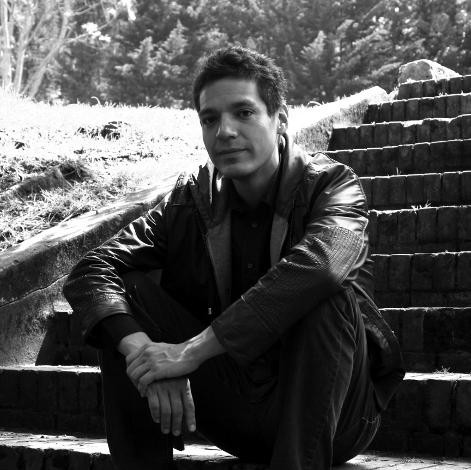 If you follow international picture books closely—that is, the translated ones that make their way to U.S. bookshelves—you are likely familiar with the work of author Jairo Buitrago, who lives in Mexico City, and illustrator Rafael Yockteng, who makes his home in Colombia. The two have collaborated on eight picture books, including several published here in the States by Groundwood Books. Jimmy the Greatest! was named a Kirkus Best Book of 2012; Two White Rabbits(2015), which tackles the complex issue of migration, was the recipient of a starred Kirkus review. And Walk with Me was a finalist for last year’s Kirkus Prize. Their newest collaboration, on shelves next week and translated by Elisa Amado, is called On the Other Side of the Garden, and I reached out to Yockteng to ask him about this compelling tale.

The story, dominated by a vivid, dark blue palette, is one of a young girl, dropped off at her grandmother’s house. The girl, whose parents are divorced and whose mother has moved to another country, doesn’t pay close attention to her father’s words as he takes her to his mother’s home. When he leaves, she is baffled to discover that she will live there for an indeterminate time—until her father could “come back and get [her] some day.”

Scared and overwhelmed, she discovers her first night there that she is not alone. Three creatures—an owl, a frog, and a mouse—enter her room, ask if she’s new, and immediately befriend her. She decides to take a moonlit walk with them and explore the countryside, the cold, fresh grass a new sensation to her city feet. As they walk and talk, she opens up to them about her fractured family and her dread over suddenly living in a home not her own.

“The characters from On the Other Side of the Garden seem charming to me,” Yockteng tells me via email, “and what I like the most are their voices. The dialogue clearly captures the personality of each one. What I most enjoyed when illustrating this book was the technique. I had never before made a book with this technique or color management, and I enjoyed solving the composition of each of the images. It became a kind of funny game.”

Indeed, only a few elements in each illustration—such as, the girl’s dress and her three animal friends—pop off the page in color throughout the book, as she and the three creatures take their walk under a shadowy night sky, the more somber, dominant blue capturing the girl’s apprehension and worry. It is at the book’s close that the palette shifts dramatically. The sun begins to rise and color returns to her world. The grandmother embraces the girl and does not scold her for her midnight stroll. “You know you are going to be here for a quite a while?” she asks the girl, adding “[t]his is your house, too.” She then acquaints her granddaughter with her garden, sunny greens now dominating the final spreads.

“I illustrated this book with digital techniques,” Yockteng explains, “which simulate the engraving technique. I have been working digitally for many years, but I like to change techniques, depending on the project. In this way, I can give a different environment to each one and not get bored doing the same thing over and over again.”

Born in Peru, Yockteng studied Graphic Design at Jorge Tadeo Lozano University in Colombia. He has worked as an illustrator since 2000. That same year, he won an illustration prize from the International Board on Books for Young People in Colombia, something he says opened doors for him to work with publishers.

He takes pleasure in telling stories with Buitrago, a collaborator he also considers a friend. Having just finished another picture book with him, called Cave Paintings, Yockteng has two more projects on the way—Ugh: A History of the Pleistocene, also with Buitrago, and El Pollo Chiras, a traditional Colombian story.

“I like stories,” Yockteng adds. “Via illustration, I found a way to tell the stories I like, ones children also enjoy. It is a compliment to me that my books are published in North America, as it is the opportunity to unite a very fragmented world.”