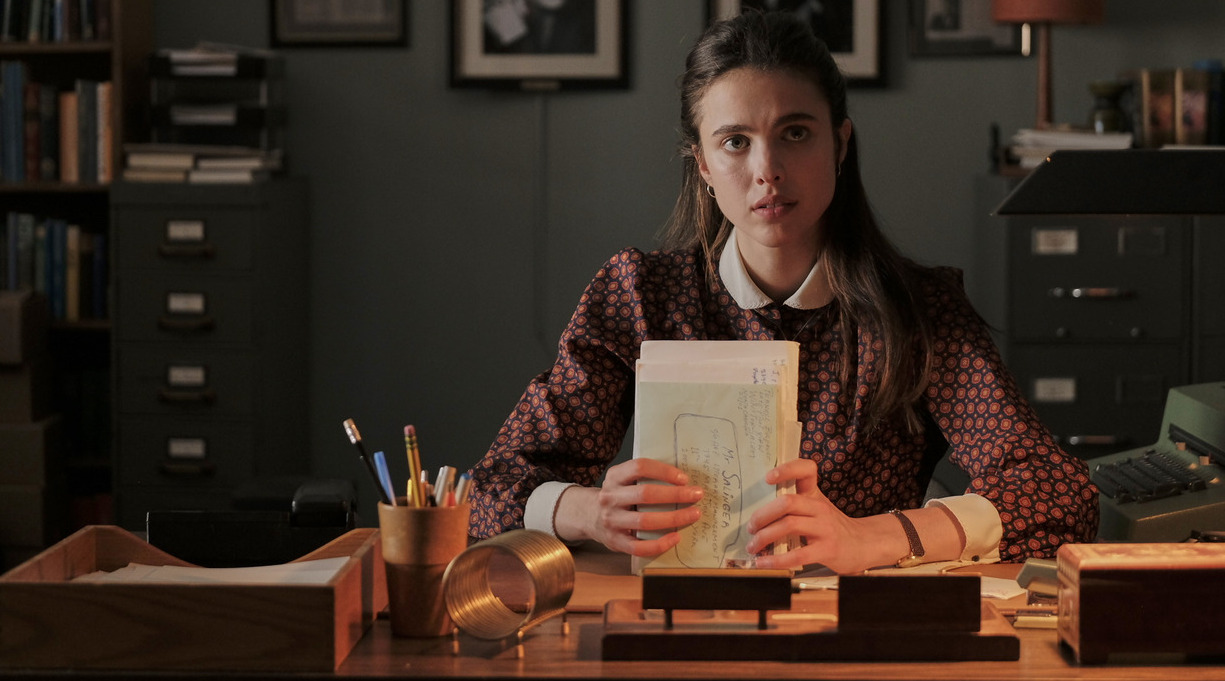 Margaret Qualley in ‘My Salinger Year.’ Photo from IFC Films

At one point in in J.D. Salinger’s much-loved 1951 novel, The Catcher in the Rye—Kirkus gave it a star—teen narrator Holden Caulfield reflects on how people think that he acts childish sometimes: “It’s partly true…but it isn’t all true. People always think something’s all true.”

Viewers should bear this sentiment in mind as they watch the film adaptation of Joanna Rakoff’s 2014 memoir, My Salinger Year, about her brief tenure as an assistant at Salinger’s literary agency, Harold Ober Associates, in the late 1990s. In the book, Rakoff declines to name the firm, calling it simply “the Agency,” and the film obfuscates its identity further, calling it “A and F Literary Management.” One would be forgiven for treating the film, which premieres in theaters and video-on-demand on March 5, as a work of fiction—and not a particularly revelatory one at that.

Readers, and viewers, expecting dirt about Harold Ober Associates or Salinger will be disappointed. Rakoff chides “the Agency” for being exceedingly old-fashioned, particularly regarding technology—“I don’t know what an electronic book is, but I’m not giving away the rights to it,” says her unnamed boss, at one point in the memoir. Salinger, in both the book and film, is simply portrayed as a reclusive, quirky, but always pleasant author who inspires legions of fans—some of whom write him fan mail, which he explicitly has no interest in reading. Indeed, one of Rakoff’s duties is to send out form responses to these missives: “As you may know, Mr. Salinger does not wish to receive mail from his readers. Thus, we cannot pass your kind note on to him.”

By her own account, Rakoff stumbles into the job in a manner that seems unlikely in today’s cutthroat job market. On her first day of work, she’s not even entirely sure what a literary agency does, and she’s completely unaware that Salinger is a client. By the end of her time at the agency, though, she’s selling stories to magazines and well on her way to becoming an agent herself—only to rather casually ditch that opportunity and pursue her dream of becoming a writer. It’s a good thing that it worked out—she published a prize-winning novel, A Fortunate Age, in 2009, as well as this well-received memoir—but what if it hadn’t? We certainly wouldn’t be reading about it, or seeing a version of her early life on the big screen, starring Fosse/Verdon’s Margaret Qualley as Rakoff and a game Sigourney Weaver as her boss.

It’s a tale that’s much better on the page. In the book, Rakoff straightforwardly discusses her struggles to pay rent and student-loan bills on a vanishingly small salary, which doesn’t really come up in a meaningful way in the film; the movie’s Rakoff not only lives in a ridiculously spacious Brooklyn apartment but also has a strangely rosy view of the rich. At the very start of the film, she tells viewers that she admired people she saw at the Waldorf and the Plaza who “seemed to have interesting lives”; like these people, she wants to be “extraordinary.” (Later, the film presents a bizarre, out-of-left-field fantasy sequence in which she dances majestically in the lobby of an upscale hotel—which, as we all know, is a place where such dreams are made.) By contrast, the memoir’s Rakoff wonders about the easy smiles of businessmen she sees in the Waldorf lobby: “Was it money that allowed them to smile that way? Money and security?”

At another point, the memoir addresses how one agent, known only as Max, brings in huge deals for the Agency but isn’t adequately compensated—a consequence of the Agency’s archaic payment system. None of this is in the movie, which demotes Max to a quirky minor character, albeit one amusingly played by Gilmore Girls’ Yanic Truesdale.

The book and movie both address a deal that Salinger made with a small press in 1996 to publish his story “Hapworth 16, 1924” in book form, but only the memoir reveals that the deal eventually went south; the film leaves this plot thread dangling. (New York magazine ran the publisher’s intriguing essay about the experience in 2010.) Another amusing anecdote makes it through intact, though: Rakoff’s boss simply couldn’t wrap her head around how to sell Judy Blume’s novel for adults, resulting in the beloved author’s departure as a client. The novel in question is unnamed, but it’s almost certainly 1998’s Summer Sisters. It went on to become a bestseller.

The film, written and directed by The Good Lie’s Philippe Falardeau, makes a few other odd changes to reality, as well. The movie version of Rakoff breaks up with her terrible, pretentious boyfriend when, in reality, they dated a few more years—it’s not as dramatic, perhaps, but it certainly has a relatable ring of truth. And Rakoff’s boss’s lover, Daniel, who never appears in person in the memoir, is played by Colm Feore in a film performance that’s utterly charming but also utterly superfluous.

In the end, Rakoff’s memoir is simply a more rewarding experience than its adaptation, which perhaps won’t surprise fellow Salinger fans. “If there’s one thing I hate, it’s the movies,” says Holden Caulfield in Catcher. “Don’t even mention them to me.”