‘Munich – The Edge of War’: A No-Thrills Thriller 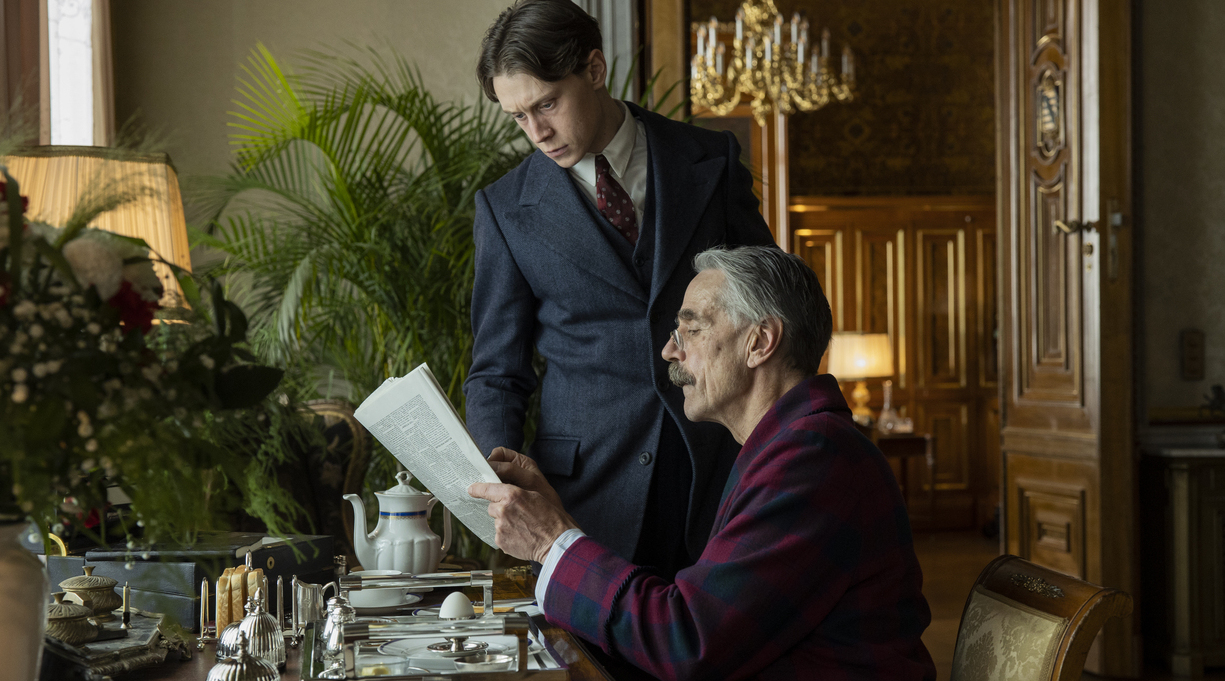 George MacKay (standing) and Jeremy Irons in ‘Munich – The Edge of War.’ Photo by Frederic Batier/Netflix

Violence is a key element of the spy thriller, and it could be argued that it’s the most important one. The adventures of James Bond, Jason Bourne, or Jack Bauer would be bland indeed if those adventurers weren’t in constant danger of being murdered on a mission. Even quieter, more cerebral espionage tales in the vein of John le Carré heighten the stakes and keep things lively by killing off occasional agents, double agents, or innocent bystanders.

But bestselling author Robert Harris, in his 2018 historical thriller, Munich, decided to go a different way. The book certainly contains familiar ingredients—including stolen documents and an assassination plot—but it, and its new film adaptation, Munich – The Edge of War, premiering on Netflix on Jan. 21, contain very little violence, indeed. That is, if one ignores the violence they do to history—at least, when it comes to one prominent participant.

That’s not to say that Harris didn’t do his research. Given its setting, he had to, or he’d face the wrath of countless aficionados of World War II documentaries on the History Channel. The story’s backdrop is the infamous Munich Conference of 1938, at which the leaders of Germany, the United Kingdom, Italy, and France—Adolf Hitler, Neville Chamberlain, Benito Mussolini, and Édouard Deladier, respectively—signed an agreement that allowed Germany to annex border regions in Czechoslovakia known as the Sudetenland. The pact went down in history as an act of appeasement that paved the way for further Nazi expansion in Eastern Europe, despite Hitler’s empty promises of peace. Soon after it was signed, Chamberlain memorably stated that “a British Prime Minister has returned from Germany bringing peace with honour. I believe it is peace for our time.” The United Kingdom would, of course, end up going to war with Germany anyway, less than a year later. Chamberlain’s reputation as a crushingly naïve leader who bowed to a monstrously evil man persists to this day.

Harris’ novel, however, offers a different view of Chamberlain—but his novel takes some time to reach that questionable conclusion. Along the way, it lays out a curiously inert story of two fictional characters: Englishman Hugh Legat, one of Chamberlain’s private secretaries, and German Paul von Hartmann, a member of his country’s diplomatic corps. The two attended Oxford together, where they were friends, although they had a falling out over Hartmann’s sympathy for German nationalism. Hartmann had a change of heart about the Nazis when they hurt someone he actually cared about, so now he’s part of a conspiracy to arrest, and possibly assassinate, Hitler. As officials meet in Munich, Legat and Hartmann both want to avert appeasement for different reasons—and a stolen document, featuring minutes of a secret Nazi meeting, could be the key to making that happen.

Or could it? This is not an alternate-history novel in the vein of Harris’ 1992 bestseller, Fatherland, set in a world in which Germany won World War II. Munich is a straightforward tale that follows real-life events, so readers know from the outset that the appeasement will happen, the German conspirators’ coup attempt will not be successful, and the stolen document will have little to no effect on anything. This effectively drains all the suspense from the story, unless one cares about the fates of the fictional characters—and that’s very hard to do. Legat is an ambitious civil servant but has few other personality traits, and Hartmann, despite his anti-Hitler leanings, is still a Nazi—even if he feels bad about the fate of someone in his past. (That character is so underdeveloped as to barely exist, as are the few other women in this story, including Legat’s wife and a government typist.)

Harris seems more interested in his real-life characters, and, to that end, he imagines several scenes in which Legat or Hartmann directly interact with Hitler or Chamberlain. Harris’ portrait of Hitler as arrogant and suspicious isn’t exactly revelatory, though, and Chamberlain comes off as little more than a well-meaning bureaucrat until the end, when the novel strongly implies that the prime minister was playing a long game—appeasing Hitler to simply buy time, so that British forces could adequately prepare for unavoidable war. It also has Chamberlain noting that Hitler’s inevitable betrayal will cause the United States to enter the war—again, implying that this was part of the British leader’s plan all along. It seems like a stretch to give Chamberlain this much credit; it’s such a stretch, in fact, that readers may wonder if this book is alternate history after all.

The movie version, helmed by German director Christian Schwochow and adapted by British playwright Ben Power, sticks very closely to the events of the book, which results in a slow, predictable slog. (A single, unremarkable fistfight is added to the proceedings, to no great effect.) 1917’s George MacKay, as Legat, spends much of the film looking haggard and worried, but he has little to work with in a film with a foregone conclusion. Jannis Niewöhner, as Hartmann, radiates grim urgency but few other emotions, while Ulrich Matthes, as Hitler, is adequately reptilian but unremarkable. Downton Abbey’s Jessica Brown Findlay is completely wasted in a barely-there role as Legat’s wife, Pamela, while Babylon Berlin’s Liv Lisa Fries does her best with a vaguely sketched character—one that only exists to inspire Hartmann’s angst. Oscar winner Jeremy Irons, however, does manage to imbue his version of Chamberlain with a surprising warmth, and his performance almost makes the movie worth watching—if one can ignore how the story improbably turns the prime minister into a foreign-policy chessmaster.