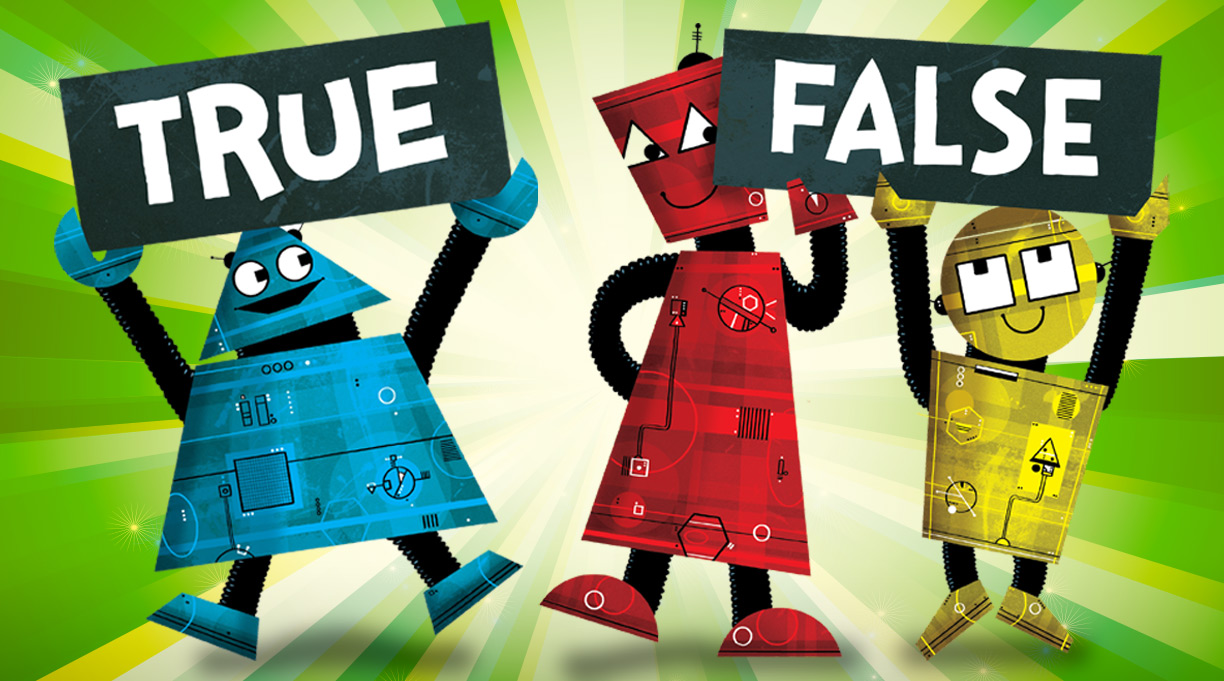 Michael Rex has written and illustrated over 40 children’s books and employs a variety of styles in his work. Facts vs. Opinions vs. Robots (Nancy Paulsen Books, Feb. 11) invites young readers to consider the difference between what is provable and what is personal. He recently answered some questions about the book.

Was there a particular moment when you realized that you wanted to address the topic of facts and opinions?

I have two boys. They’re now 13 and 15, but as they were growing up there were a lot of conversations in the house about facts vs. opinions. My son would say “No one can eat broccoli; it’s disgusting,” and I would say, “Other people like it.” And he’d say, “That’s impossible!” Working with kids you see this thing about things that they think are facts.

A lot of my books sort of creep up on me. I’d had this idea to do something that used the picture book to teach [the difference between] facts and opinions, designed so that there would be facts on the page: A whole classroom can look, and everyone can agree that there are three robots on the page. And then you can say, well, which color is best for a robot? And that’s opinion and a discussion.

Is this the first time you’ve worked entirely in digital art?

Yes! Everything else I’ve done has been hand drawn and then colored and finished digitally. This time I really wanted to do something that looked completely different, that felt completely different, and I had done these robots like a year earlier that were 100% digital. I said this is what I want it to look like.

You know I’m very lucky. I’ve had a long career, and now one of my goals is I want every book to look as different as possible! Just to keep me interested and because I’m not selling a style, I’m selling the idea of the book.

Whose humor do you most enjoy; who makes you laugh?

One of the first writers that made me laugh was Douglas Adams, the [Hitchhiker’s Guide to the Galaxy] books that probably hit me around eighth grade or ninth grade when they were coming out. As far as picture-book people, I love Syd Hoff; he’s really funny; he’s one of my favorites. And then contemporaries: Nick Bruel cracks me up.

A lot of the people I like are author/illustrators, a lot of the people that really sort of influenced me as a kid. I grew up on Syd Hoff, H.A. Rey, Richard Scarry—those were the ones that really spoke to me. Laurie Keller is very funny; I love picture books, you know like Jon Agee, where it’s just like “this wouldn’t work without the drawing.”

There is a different kind of writing when you’re writing and drawing yourself, because you’re doing a setup in the text. and the drawing tells the rest of the joke as opposed to someone who’s sort of writing a funny narrative and then it’s being illustrated. When I see picture books that don’t really do it for me, it’s just really that they are illustrated manuscripts. I love picture books that the text and the image work in tandem to tell the story. That’s what I aspire to when I’m making a picture book.

Kathie Meizner manages a public library in Maryland and reviews children’s books for Kirkus Reviews and the Washington Post.