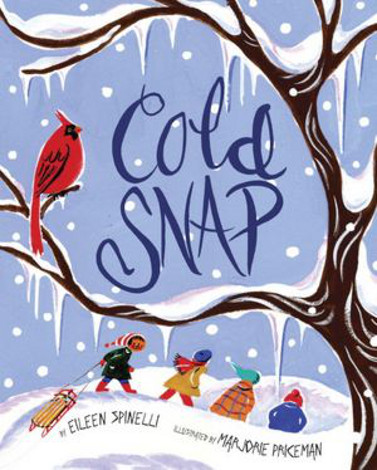 There’s an art to the sparsely worded picture book, which communicates a lot with very little. We see a lot of those today, often (but not always) concept books. Think of Laura Vaccaro Seeger’s books or Jon Klassen’s books, which nail dark humor with such economy.

In fact, we see such spare picture books so very often today that it’s remarkable when one fleshed out with abundant text, characters, and setting appears. It seems darn near lush.

The town of Toby Mills is in the grip of a cold snap. Spinelli introduces us on page one to Millie Moffat and her little brother, Chip, making snow angels and throwing snowballs after school. We also meet the town’s centerpiece and gauge for determining the thermometer’s wrath: the statue of General Toby, the town’s founder. An icicle hangs from his nose, and as our story goes on and the cold gets colder, the icicle grows in size.

The children of the town are thrilled, needless to say, about the drifts of snow. They have a big day outside, even if by nightfall, they “were dragging. And wet. And shivering.”

Starting with the fourth spread, Spinelli takes us through the days of the week--from Saturday to Friday, showing us the progressive cold and how various members of the town cope. It is here in these delicious details that the town comes to life and the story takes its shape. It’s a snapshot of a week in one tiny town, vividly realized via both text and art.

We get to know everyone and everything, and it’s a delight. We know that Mrs. Moffat, the church soloist, gargles with salt to avoid a sore throat from the cold. We know that Pastor Pickthorn delivers his sermon with chattering teeth and, later, tapes two hot-water bottles to his feet for his afternoon nap. The Sullivan sisters head to church in long underwear. Miss Dove gets pulled to school on a sled across a frozen parking lot by one of her students, Franky Tornetta. Poor Mr. Moffat gets stuck on a city train for two hours when the doors freeze shut.

That’s just the tip of the iceberg (so to speak). And all the while, “the general’s icicle was growing.”

Soon, a simple cold snap becomes nearly a terror (though always tinged with humor and never actual trauma) – with the mayor getting more and more complaints at City Hall. Spinelli captures the cold with a pleasing precision: Ears tingle. Toes are too numb to wiggle. Cheeks are frosty pink. Boots crunch on snowy streets. Ice glazes alleyways. People slog through the slush to church. Bitter winds nip at noses and even flip poor Chip off the “creaky schoolyard swing.”

And splashed atop the stark white snow are Priceman’s bright, unabashed colors: She brings the town and its residents to life with primarily yellows, reds, and blues – all vibrant, not shy at all about their luster. She knows how to meet this detailed text on equal footing, giving us just as much detail in her illustrations, but never once overwhelming Spinelli’s words. Some smart editor somewhere deserves a tip of the hat for this author-illustrator pairing.

I won’t give away the exuberant ending, should you want to read this yourself, but suffice it to say there’s some blessed relief for the townsfolk – as well as a closing sugar-on-snow candy recipe for readers. (A recipe that involves merely real maple syrup and fresh, clean snow? Score!)

Take a visit to Toby Mills. It’ll warm your heart.

Julie Danielson (Jules) has, in her own words, conducted approximately eleventy billion interviews and features of authors and illustrators at Seven Impossible Things Before Breakfast, a children's literature blog primarily focused on illustration and picture books.