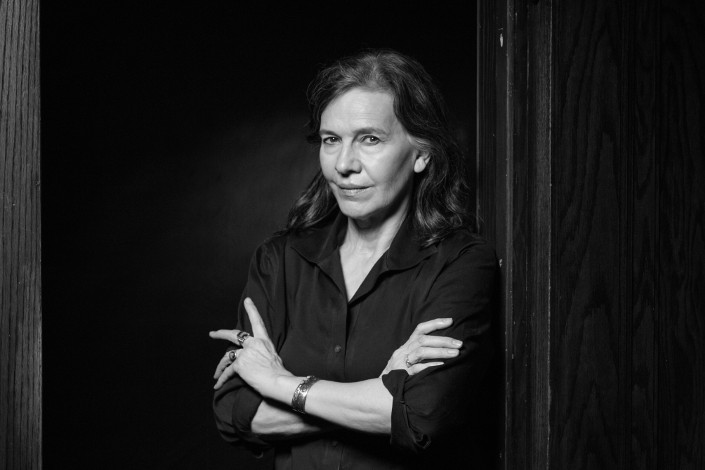 Louise Erdrich gave birth to a daughter (and opened a bookstore) at a momentous time in our country’s history—2001—and those twin poles of life and death inform her latest novel, Future Home of the Living God. As befits a novel by Erdrich, who has long considered the nature of time, Future Home of the Living God exists in two moments: in its creation in 2002 and in its moment of publication now. In the galley version of the novel, there is a note to readers before the novel begins in which Erdrich recalls storing the manuscript for eight years while she worked on the National Book Award–winning The Round House (2013) and LaRose (2016), which won the National Book Critics Circle award for fiction that year. But when she reread the manuscript in 2016, “I felt I’d circled back to 2002, only worse,” Erdrich explains. The novel was written in “regressive times,” as President George W. Bush signed a global gag rule that kept U.S. funds from going to international family-planning groups that offered abortion and abortion counseling. “The newly imposed 2017 global gag rule cruelly cuts off U.S. funds from international family planning and goes further to eliminate HIV testing, Zika testing, and birth control,” she writes.

So it’s no surprise that as the novel opens, Erdrich depicts a speculative, dystopian world in which climate change has ended winters in Minnesota and in which evolution has reversed (it’s a surprise for the reader when a saber-toothed cat leaps from a tree and devours a chocolate Labrador in an urban backyard). This, just as the protagonist, Cedar Hawk Songmaker, adopted child of liberal white parents (Cedar’s mother is Native American, and her father is…a delightful, and convincing, surprise), discovers herself pregnant. In addition to the evolutionary shock, there’s a sudden spate of infertility. Not unlike Atwood’s The Handmaid’s Tale, a novel Erdrich admires and acknowledges as an inspiration, in Future Home of the Living God the government asserts its control over a suddenly scarce resource: healthy human babies. The evolutionary reversal, then, mirrors the reproductive reversals faced by the women of the novel.

Pregnant women find themselves rounded up and housed in hospitals and, later, drafted into aiding the government, incarcerated in former prisons that are renamed as Birthing Centers. Technological surveillance—mini drones, computers, and cellphones—serve to monitor the whereabouts of potential mothers, and Cedar has become a prime target.

These activities, Erdrich suggests, are not without precedent: following the events of 9/11, Congress enacted the Patriot Act. “The provisions of the Patriot Act were far-reaching, extending beyond any context I had known,” Erdrich states. “For example, I own a bookstore, and the libraries and bookstores were on notice to report book activity to the government.”

Indeed, Erdrich notes that “women’s rights, reproductive rights in particular, are fragile, in part because they are so recently obtained. Our daughters,” she continues, “have grown up with the sense that these rights are givens, but they can be taken away. These rights are being eroded right now.” For example, Erdrich points to the fact that in 2002, President George W. Bush signed the global gag rule with its potentially devastating implications for women around the world. And Erdrich points out that climate deterioration has already had an effect on some populations. The implications, Erdrich believes, will be far-reaching: “There will be more human migration—and these population swells will lead to more people, as we see in Europe and other areas today, closing themselves off.”

The kernel of this adventure novel arose from an image that plays a prominent role early in the narrative: an ultrasound image. Erdrich found a genuine beauty even in the technological image of her daughter. “The blood coursing through my child was a moving visual,” she explains. “The novel began with that ultrasound image, transposed to the novel”—a picture that adorns the cover of Cedar’s journal to her unborn child.

The novel is structured as a series of journal entries addressed to her unborn son. Cedar writes about the world, its beauties, and the uncertainties (political and biological) her child will encounter. This literary conceit was an easy one for Erdrich: “I’ve kept a journal for every one of my daughters. It’s a stretch to think someone might write one for hundreds of pages. My journals for my daughters were around 60 pages,” she laughs.

These journals also depict a protagonist who encompasses a number of dualities. Cedar is both a spiritual quester (she loves to ponder the Immaculate Conception—and plays with that metaphor early in the novel) and she is filled with scientific knowledge. She fuses the spiritual and the scientific; Christian religion with her Native American ethos. Rather than either/or, Cedar is both/and. Erdrich, who is the daughter of a Chippewa Indian mother and a German-American father,grew up “trying to distinguish between spirituality and superstition. At the beginning of writing this novel, I too was asking a lot of the questions Cedar is addressing in order to figure out how to get along in my own life. This is a very human activity.

“Cedar is a doubter, a thinker, and a searcher,” Erdrich adds. “She is living in a state of wonder. I feel my own daily routine has a similar essence; I’m surrounded by trees and sky. I have to get out into that natural world every day.”

The speculative elements of the novel fall into a long literary tradition, one that seems to have accelerated at the rate of technological adaptation: George Saunders and T.C. Boyle and Julia Elliott and also Emily St. John Mandel and Laura Van Den Berg. In writing Future Home of the Living God, Erdrich had “a feeling as if I had gone back to my origin as an excited reader. As a younger reader, I loved the Dune trilogy, Orwell’s novels. These are the books that got me excited about literature. I would bring home stacks of books from the North Dakota library where I grew up.”

to the roots of Future Home, Erdrich notes her daughters as an influence because they’ve encouraged her to read speculative fiction, such as Octavia E. Butler’s work.

Future Home is, like many of Erdrich’s other novels, enriched by her thinking about deep time. As Cedar acknowledges in her entries, humans are a blip in the Earth’s history. “Part of the reason we are threatened is that humans are not wired to take care of the future; we’re wired to take care of ourselves in the present,” Erdrich says. “We need to evolve quickly toward humans who can attend to our future. Capitalism is a direct enemy of thinking about the future. Capitalism is all about getting it now.” But Native American culture, Erdrich explains, took a long-term view of the world. “It’s a cruel trick,” Erdrich asserts, “that Native Americans couldn’t survive the European diseases in greater numbers. If Natives had survived in greater numbers, our world might be more community-minded.”

J. W. Bonner writes regularly for Kirkus, and his fiction has appeared in the Quarterly, the Greensboro Review, and other publications. He teaches writing and the humanities at Asheville School in Asheville, North Carolina.