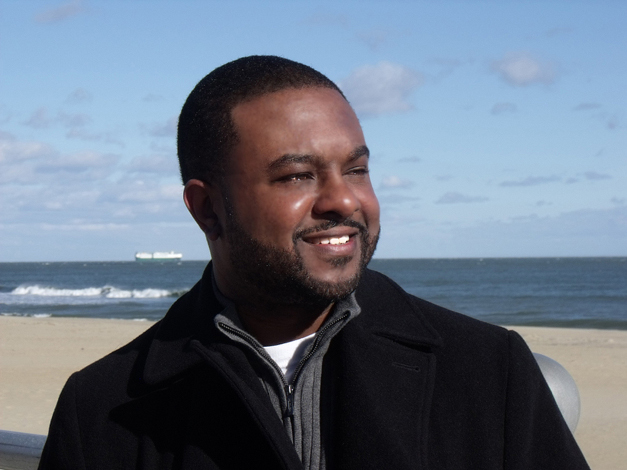 In Overturned, poker prodigy Nikki Tate lives in a Las Vegas casino, kicks butt on and off the soccer field, and cunningly pursues a murder suspect the police don’t seem to want to find.

“The key—and this is the approach the first time I wrote a female character—is not to think of it as a thesis on what girls are,” says Giles, who Kirkus reached by phone at home in Virginia. “This character is her own person, her own personality. And if I keep my mindset there, I don’t feel like I can veer too wrong in some kind of direction that might be either sexist or genderist.”

He is a cofounder and senior vice president of communications for We Need Diverse Books, a grassroots organization that fosters and promotes the depiction of diverse experiences in children’s literature.

“With my characters being African American, I always like to point out [the racism] we deal with,” Giles says. “It’s not all-consuming, so that’s why the plots of my books tend not to necessarily hinge on that aspect, but it’s always there. In my everyday life I feel it, my family feels it, kids I meet feel it, so I think it’s important to let people know this is the country we live in, and these are the concerns that brown people have.”

“It would be a disservice to not at least give a glimpse into what the daily life for a minority in America is like,” he says.

Overturned opens with Nikki and her mother, Gwen, en route to prison to pick up her father, legendary professional poker player Nathan “The Broker” Tate. He was wrongly imprisoned for the murder of a friend at a card game gone wrong—a conviction that took five years to overturn.

The family casino, Andromeda’s Palace, has struggled in Nate’s absence. Nikki’s pitches in at the office—balancing the books, basically running the show—when she’s not running tables at illegal poker games throughout town. She’s playing to pay her way through four years at the University of Virginia, where her sports star best friends, Molly and Gavin, plan to matriculate next fall.

“I was Dad’s star pupil, his only pupil, from the time I learned to read and count,” Giles writes. “After he went in, I found other ways. Books by the game’s legends. Online play where the currency wasn’t real, but the lessons were. I even had an app on my phone so I could squeeze in games. Poker’s a game of skill, not luck, despite popular belief. My skills had to be sharp if I was gonna reach my ultimate goal. Escape velocity.”

With Nate back in the mix, Nikki’s escape plan soon goes awry. When a shocking murder claims someone she loves, Nikki must navigate rivalries galore to catch the perpetrator—between her father and competing casino owner “Bert Bert” Carlino; her father and Tomás, the security head who’s been trying to catch her mother’s eye; her high school’s football team, the Vista Rojo Fighting Lions, and their nemeses the Cardinal Graham Warrior Griffins; card sharks and biker gangs.

“With rivalries, there’s a bit of a technical necessity there more than anything, particularly in a mystery, because you have to have different levels of misdirection,” Giles says. “Anytime you have characters in conflict, or groups of characters in conflict, you automatically set up potential to be the villain that we’re keeping secret throughout. Just like themes of Greek mythology are kind of threaded through, themes of the rivalries are there because I want to have a lot of people in conflict with Nikki, given the thing she’s trying to figure out.”

Megan Labrise writes “Field Notes” and features for Kirkus Reviews and is the co-host of the Kirkus podcast, Fully Booked.