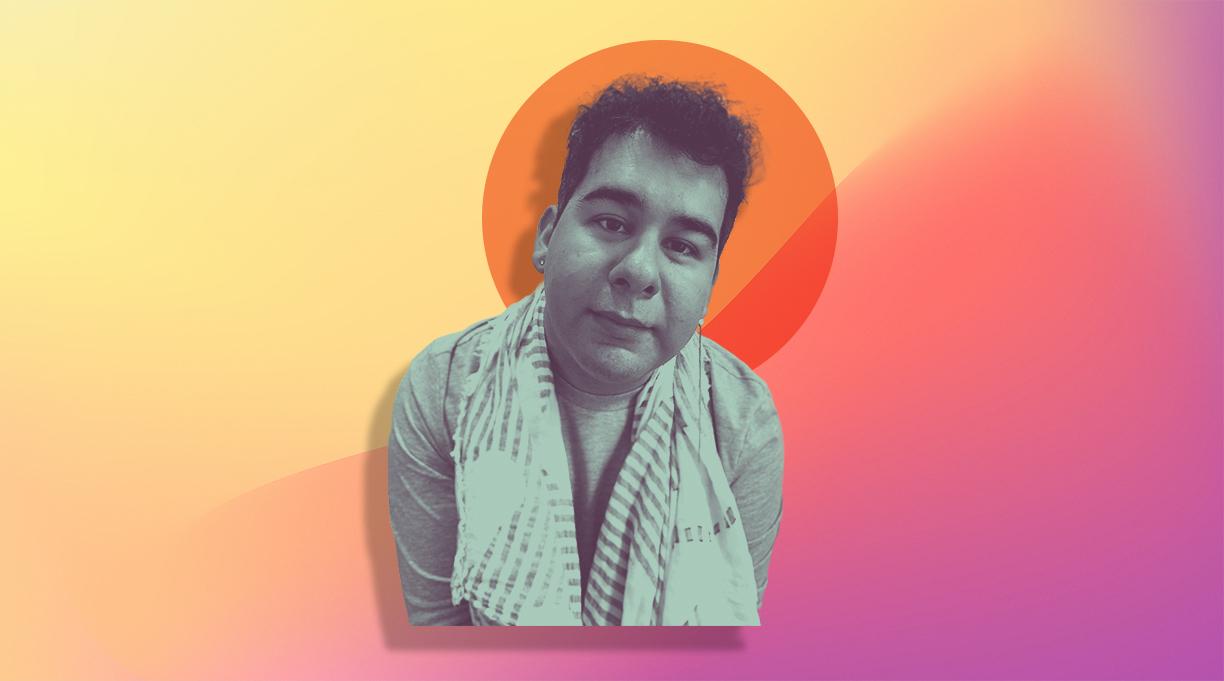 Jonny Garza Villa’s debut YA novel, Fifteen Hundred Miles From the Sun (Skyscape, June 8), celebrates the many facets of love as it follows Mexican American Julián “Jules” Luna during his senior year of high school in Texas. Closeted Jules grapples with his sexuality under his homophobic father’s crushing physical and mental abuse, but after a drunken night leads to his coming out on Twitter, Jules finds love and support from his close group of friends, his oldest sister, and his online crush, Mat, an LA–based Vietnamese American. Garza Villa spoke to me via Zoom from their home in Texas about the book’s gloriously cute romance between Mat and Jules and the story’s balance of tenderness and pain. Our conversation has been edited for length and clarity.

Your novel is a beautiful exploration of happiness and love in many forms, especially Jules’ found family of friends.

It was a very early decision of thinking back to when I was in high school and growing up in a very small town in Texas. In my own experience, I honestly can’t say that my own friend group would have reacted the same way [or] that I would have had that support or, at least minimally, some empathy, had I come out then. I knew I didn’t want Jules to be surrounded by people like that. I wanted a group of friends who were loving and protective, and I also just wanted moments where they were all together being normal teenagers as well as those intimate, one-on-one moments. That’s where we really get the most insight as to who each of them are as characters, and I really had a lot of fun doing those specifically. And contrasting that with his dad.

You highlight the difficult dynamics between Jules and his dad and how much Jules struggles with loving his dad, despite everything.

A big problem I have with a lot of the “It Gets Better” type of media is that it never really considers how hard the world might be—and remain being—even as we let ourselves be [who we are]. Those relationships that are potentially harmful don’t just stop. I wanted to be real about the complexities of being abused and trying hard to see the bright side of people who are supposed to love us. There are those moments where Jules can see that his dad loves him even though there are moments where it’s the opposite. In this story, Jules loves his dad, but it was essential to show him learning how to prioritize himself. On the other hand, I felt it was important to show that this machismo culture that his dad kind of lives by isn’t something that everyone embraces, which is why it was vital to have other male intergenerational characters be so supportive of Jules. One of my inspirations is the Netflix TV show One Day at a Time, about a close-knit Latinx family with a queer teen girl who comes out to her very religious grandmother (played by the amazing Rita Moreno) to be embraced and supported.

Going back to the happiness: The romance between Jules and Mat is romantic, cute, and sexy. How important was it for you to represent that kind of positive relationship?

Through the whole process of getting this book out, I have been pretty resolute about Mat and their relationship being the unquestionably good thing in Jules’ life without any major drama. I also wanted to keep in mind the complexities of long-distance relationships. But I did want it to be cute and as unproblematic as it possibly could. A lot of it stems from [their] being so open to hearing each other out, and it comes from where Jules mentions how Mat’s always known him as his most authentic self. The two of them together are just incredibly perfect, and I wanted to let that take me as far as I could.

The way things flow so well between them is also because of Mat’s background and his own vastly positive experience with coming out and being accepted.

Mat [has] queer siblings and queer friends and a much more open process of coming out than Jules. [It’s] having this person who comes in with so much knowledge but also empathy, because Mat’s very much an empathetic person who understands where Jules is in his own journey.

You also examine the intersection of Jules’ different identities as a gay, brown-skinned Texan who happens to be a vegetarian who loves to cook.

I wanted to make sure I did justice to the beauty of all of those identities, and being able to do it in ways like incorporating Spanish in the book, and the Selena references, and letting him fall in love with a boy for the first time. It helped encompass all those things while also identifying the unique hardships that being all these things at once brings. The question that really inspired this book is what a character’s journey would look like if he was a brown Mexican gay kid in South Texas. His journey wouldn’t be, and isn’t, the same as all the predominantly White stories that come to mind. With cooking, it did take me a minute to realize how important food and cooking [are] to Jules. It’s his way of remembering a grandmother he doesn’t have any more, and it’s his therapy, his ability to not think about all the bad things for a while, as much as it’s something he does to keep himself alive with a dad who works literally all day most days.

There is a great scene where Jules bonds with Mat’s mom while they cook a meal.

It is an important moment for Jules, where he gets to cook with this motherly figure for the first time in years since his grandmother passed away and with an actual mother—albeit not his own—for maybe the first time in his entire life, to get to share something significant to her and how meaningful that was to him.

This is your debut novel. What’s been your experience so far, writing YA as an openly queer author?

It’s just been an incredibly exciting experience and so beautiful, especially considering all the other writers and bookish people who’ve become friends. I get to share this space with all the queer readers—and especially the young, queer, Latinx and Chicanx readers—who’ve expressed how much happiness they have about this story coming out and how excited they are over this book, because ultimately it’s for them. I love hearing how ready they are for this because I’m just as ready to share it with them. Queer writers talk about getting to write the books that they wanted when they were younger. I don’t necessarily think of it as getting to write the stories I wish I had when I was younger, because I probably still would not have been in a safe space to even read them. I like to think of it as this is me telling 17-year-old Jonny, “Hey, we made it, look where we are now.” And hopefully that resonates [with] those who know what it is like to be Jules, who will be able to find some comfort and love from this story.

Ana Grilo is co-editor of the Hugo Award–winning blog The Book Smugglers and co-host of the Fangirl Happy Hour podcast.