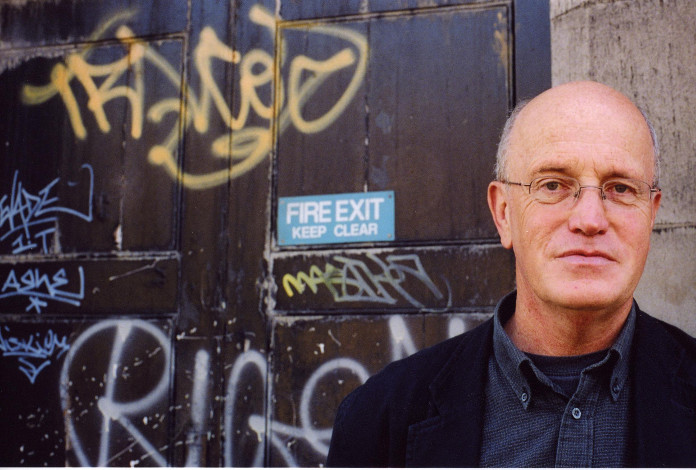 Iain Sinclair has done plenty of rambling across his long career, particularly in the past decade. In his 2002 book, London Orbital, the British poet, novelist and journalist walked the M25 highway that circles his home city to capture the details of city life most people simply drive past. In 2012's Ghost Milk he narrowed his focus, exploring the radical physical changes in his neighborhood of Hackney in advance of the London Olympic Games. His chosen term for this kind of wayward exploration is "psychogeography"—the notion that the best way to understand a place's culture is to slow down, wander and see where that wandering takes you.

In his new book, American Smoke: Journeys to the End of the Light, Sinclair transports that sensibility across the Atlantic, visiting the stomping grounds of the Beat (and Beat-like) authors that have inspired him. "I didn't have a book about America in mind for a long time, but I had America in mind for a long time," Sinclair says from London. "[The book] came into sharp focus when I felt this sense of expulsion in losing my familiar ground,” he explains. “So I went as far away as I could and decided to return to the roots of my inspiration and come to America."

American Smoke has a looseness that harks back to Sinclair's beloved Kerouac and Burroughs, written in a style that's at once digressive and rich in detail. In Gloucester, Mass., he walks past the harbor and scruffy Dogtown neighborhood trod by Charles Olson, the pioneering impresario of the Black Mountain Poets, then takes a side trip to Kerouac's hometown of Lowell. In New York, he stops by the Chelsea Hotel, a waystation for poets like Allen Ginsburg and Gregory Corso. In Kansas he swings by Burroughs' farmhouse, then heads up to Dollarton, British Columbia, the home of Under the Volcano novelist Malcolm Lowry, then visits Gary Snyder in the Northern California foothills.

At every turn Sinclair, 70, writes thoughtfully about the "weather of place" and the way his walking intersects with his memory and with the writers' words themselves. The book lacks a sense of straightforward storytelling, but Sinclair stresses that it was never meant to have one.

"This isn't my attempt in any way to write a history of these people," he says. "It's much more about trying to describe a major journey or a pilgrimage, which America lends itself to. The whole push to go west, the extravagant to-ing and fro-ing of people like Kerouac and Lowry wasn't like what we see in movies about Beats, which feel more like jeans commercials....I was trying to give my own very personal take on particular places and people, in a very fragmentary way that hopefully builds up into a picture."

Visiting the sites where his favorite authors lived, he says, invariably colored the way he now perceives their work. Sinclair writes of Olson that "the gathering together of geological particulars, and the processing of technical terms into the energy field of the poem, was what I wanted from Gloucester."

"I'd built up an idea of what these places were from reading the books, but actually spending time in Gloucester, spending time briefly in Lowell—I went back to the books and they hit me differently," he says. "It was real, and there were specifics I hadn't picked up on. In Gloucester I never got the full sense of the difference between what it was to be on the harbor and to be in Dogtown. I got that, now, having seen it."

One theme of the book is the place of the Beats in the larger literary pantheon—dismissed early on, then celebrated, then dismissed again. Where some saw (and continue to see) self-indulgent prose, Sinclair perceives an important turning point in literary history that remains essential. "They read much more thoroughly than people gave them credit for," he says. "They were not these know-nothing bohemians they were supposed to be. They knew a lot, they were just interested in being autodidactic and finding their own path and feeling like they were outside of the mainstream of what American society was."

His American excursion over, Sinclair is back in England and still walking: His next book, he says, will cover a new overground railroad that's cut through his hometown. "London is linked up in ways that have never happened before," he says. "So I'm interrogating the interesting people and places and things I came across along the way."

Mark Athitakis is a writer based in Phoenix and a regular contributor to Kirkus.