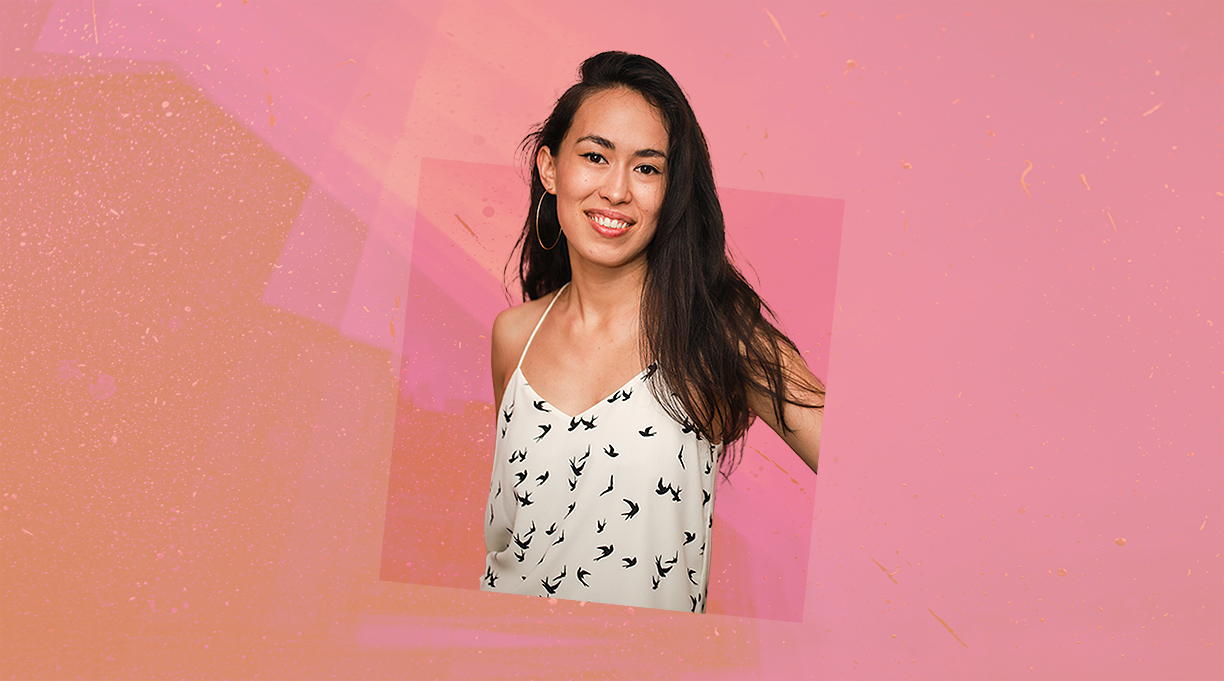 Harmony Becker debuted as the illustrator of They Called Us Enemy (Top Shelf Books, 2019), a New York Times–bestselling, multiaward-winning graphic memoir about George Takei’s World War II internment camp experiences written by Takei, Justin Eisinger, and Steven Scott. Her second book and solo debut, Himawari House (First Second, Nov. 9), follows a group of friends in a shared house in Tokyo. Nao, an American who, like Becker herself, is Japanese and White, is living and studying Japanese with Singaporean Chinese Tina and Korean Hyejung. The girls have two Japanese housemates, brothers Shinichi and Masaki. This deeply emotional book pulls readers into the characters’ lives and relationships, using art and text in extraordinarily effective ways. Becker lives in Mexico City; she spoke with us over Zoom, and the conversation has been edited for length and clarity.

I understand you took a nontraditional path to becoming a published author and illustrator.

I originally wanted to go to CalArts for animation, [but I] couldn’t afford the price and didn’t want to be in debt. So after high school, I ended up doing two years of volunteering in Washington, D.C., and then I was in South Korea for a year and a half studying Korean. I decided I was going to go to the local art school in Columbus, Ohio. I did one semester before I realized, OK, this is not worth being in debt for. So I dropped out, and a friend and I were trying to work on our portfolios to see if we could get into the animation industry in LA. But both of us realized we wouldn’t be able to tell the stories that we wanted to tell, at least not right away. I was a waitress for maybe five years [before] my first job with They Called Us Enemy, drawing in my spare time. Maybe a year or so before I got approached by Top Shelf, I started posting a little every day. It was an Inktober thing—a prompt turned into a story and then my follower count shot up. From there, I decided to do something long-form. Himawari House started off as “Himawari Share,” a webcomic.

I loved the sheer variety of artistic styles in the book, often within a single panel.

I read a lot of manga growing up, and it’s pretty common to use that sort of style change to convey different types of emotions. The biggest influence for this book was Honey and Clover, a series from the early 2000s. They did a lot of extreme tone shifts, not just in the art, but in the writing, and I definitely took a leaf out of that. That’s something I kind of miss when I read Western graphic novels: The art tends to stick to one format. I feel like it doesn’t always reflect all the shades of being a person.

Did your manga consumption influence the framing of Himawari House?

I was lucky that there was manga in my local library—even though they’d only have one or two volumes of a 30-volume series, it was still eye-opening to see characters who were allowed to be more than just the Asian character struggling in a White world. The authors were writing for Japanese people in Japan, so of course that wasn’t even something they were thinking about. So by proxy, I also felt like it wasn’t something that I always needed to be thinking about. If anything, I started to have the reverse experience and to delve into a world where everyone looked like me; I tried to become more Japanese than I was American. I think it was that mentality and the experiences it led to that became the basis for Nao’s journey in the book.

I loved how grounded the book was in the setting and the characters’ cultures but that it’s also accessible to a wide range of readers.

I have conflicting thoughts about universality versus specificity. This story is completely fictional, but all the emotions are real. I wanted to come from a place of total honesty. I feel the most connected to literature—seen and understood and validated—when [there’s] a very specific feeling I thought that I was the only one who had ever experienced. I wanted to process my own emotions, and if somebody else connects to it, that’s wonderful. Specificity shows you your place in the world; it reminds you, hey, the place I’m in is not the default. Specificity can also be grounding in the sense of, oh, my experiences are valid versus the assumption that we can all find ourselves in a “universal” narrative—which is often a White American narrative. I’m not Whitewashing myself or my experiences to be more palatable. You can be uncomfortable for once; I want you to know how it feels. There’s a whole world out there of people who look nothing like you, maybe don’t think like you at all—there’s so much to be seen and understood and learned. Just the realization that the boundaries of another language are sometimes wider than your own in a way that allows you to have thoughts that you would never have had if you were speaking only in English.

I got such a warm, fuzzy feeling from the way you wrote some of the Asian characters’ [non-native] English. It evoked fond associations with many friends and their parents.

We realized in the process of editing that people were having a strong reaction to Hyejung’s accent, in particular. Especially in the United States, Asian accents have come with negative connotations or are used for humorous purposes. I was tired of that; I have so many people in my life who speak with an accent—I speak with an accent when I’m not speaking English. I love works like Their Eyes Were Watching God, where you really hear the accent in the way it’s written. Amitav Ghosh plays a lot with language as well, and I really wanted to add something to that, a new way of experiencing accents. I wanted to celebrate [them as] proof of being able to transform yourself and communicate with other people. To anybody who takes offense, that’s your journey; of course, feel however you want to feel about it, but I hope that people can recontextualize their relationship with accents, why they see [them] as offensive rather than something that should be celebrated.

Your multinational characters speak to one another in such a striking blend of languages, and you represent that in a very sophisticated way on the page, sometimes with subtitles, sometimes without.

I decided to write Hyejung as Korean because of the experience I had living in Korea. I also lived with a Malaysian roommate and traveled to Malaysia and Singapore with her. The blend of cultures and languages really struck me. I thought about the dynamic of how people from different countries interact with each other when they’re speaking a common language: Sometimes you throw in words from your own language, sometimes your sentences don’t make grammatical sense, but you still understand each other. I wanted to reflect that playfulness and co-creation of communication that happens. In writing this book I’ve come to appreciate a bit more how different cultures are viewed from different angles, from outside, inside, or alongside.