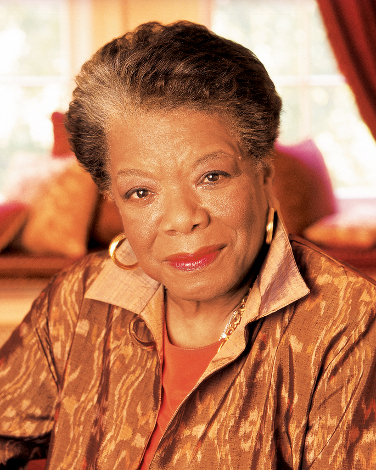 Sometimes the seeds of greatness are difficult to trace, namely because they’re buried in soil that’s now populated by the towering trees of triumph and success. Maya Angelou has cultivated a virtual forest by now, reflecting a prolific career that spans seven decades. She’s written more than 30 bestselling titles and has amassed enough nominations, awards and honorary degrees to venerate a small army. Though her curriculum vitae includes a jaw-dropping Who’s-Who list of colleagues and collaborators, her new book, Mom & Me & Mom, suggests that her eminence and fortitude have largely grown from a more organic source: fierce maternal love.

Until the age of 13, Angelou lived in Stamps, Arkansas with her paternal grandmother, who wielded a profound influence in her preadolescent life. “My Grandmother Henderson was the daughter of a former slave,” says Angelou, “but she gave me wings. She’d say, ‘When you get, give. When you learn, teach. That’ll take you all over the world.’ And I heard it somewhere inside myself beyond the literal hearing of it.”

During the five years Angelou was mute (the result of having been raped at age 7) her grandmother continually spoke words of certainty and hope that arguably set the stage for her granddaughter’s success. “When I was not speaking at all,” says Angelou, “she’d braid my hair and say, ‘Sister, now, some people say you’re an idiot or you’re a moron because you can’t talk. Mama don’t care what these people say. Mama know when you get ready, sister, you’re gonna be a teacher. You’re gonna teach all over this world.’ And I used to sit there at her feet while she was braiding my hair, and think, ‘This poor, ignorant woman. Doesn’t she know I will never speak?’” Angelou enjoys a gentle, howling chuckle at the irony of it all. “And as it is, I have taught at the Habima Theater in Tel Aviv, and at the Rome Opera House. Of course I lived in Egypt as a journalist, and Ghana. I’ve traveled all over the world and I speak a number of languages. So I think Grandmother Henderson liberated me with that statement. She said it every time she braided my hair.”

At age 13 Angelou and her older brother moved to San Francisco to live with their mother. For Angelou it was a tenuous arrangement, as she was still harboring anger toward her mother for having abandoned her as a child. In terms of mother material, Vivian Baxter was just about as unconventional as they come. Angelou didn’t know what to make of it. “She was so tough and quick,” she remembers. “She danced in the kitchen and turned the record player up loudly playing all sorts of songs. I resented that she didn’t remind me of my grandmother. She wasn’t a mother; a mother wears an apron and speaks softly and prays over you. And what was Vivian Baxter? She was singing and dancing and carrying on like that.”

Baxter’s unapologetic devotion to authenticity, however, fueled her daughter’s courage, and also her boundless creativity. Though Angelou considers Baxter’s influence an ongoing liberation, she remembers the exact day when her mother’s words released her to great heights. Angel

ou, then a young, single mom, was leaving a particularly meaningful lunch date with her mother. “Baby,” said Vivian, “I’ve been thinking and now I am sure. You are the greatest woman I’ve ever met.” Knowing that her mother was highly intelligent, and also knowing she wouldn’t lie, Angelou decided to believe it. “I thought, suppose she’s right?” says Angelou. “Suppose I have it in me?”

And though she’s faced plenty of challenge and heartache throughout her 85 years, Angelou has enjoyed a life of great abundance—due in large measure to the influence of her mother and grandmother. Daring to live without apology or regret can be daunting, especially in the face of societal or familial expectations. Baxter modeled an approach to life that gave her daughter the courage to stay true to herself.  “In Vivian Baxter’s liberation, she also liberated me from fearing death,” says Angelou. “She used to say, ‘If I die today or tomorrow, the world doesn’t owe me shit.’  I thought that was so rude and daring. When I’d ask her, ‘What does that mean?’ she’d say, ‘Nobody promised me today. And I’ve got today. Nobody promised me last week, and I had last week.’

“At one point I thought, ‘Wait a minute. Everybody will die, so I don’t have to be afraid of that,’” continues Angelou. “It’s the one promise that will not be reneged upon. So if a husband or a beloved or a friend doesn’t like the way you’re living life, it’s your life. You’re gonna have to give it up sooner or later anyway, so there’s no sense in giving it up before you have to.”

Laura Jenkins is a writer and photojournalist based in her hometown of Austin, Texas. Photo of Maya Angelou and her mother, Vivian Baxter, is courtesy of the Angelou Personal Collection.