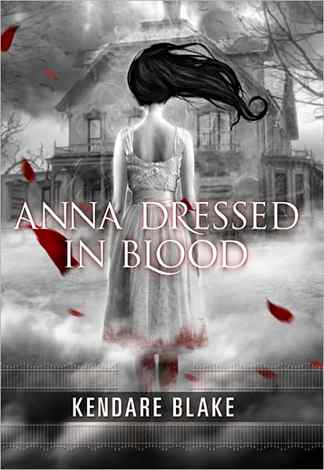 Are you a fan of Buffy and Supernatural? Lucky you*! I’ve found your next read: Kendare Blake’s Anna Dressed in Blood.

Seriously, guys: DO NOT MISS THIS BOOK.

If you aren’t immediately swooning over the title and the cover art—and really, I’m not sure if they’re humanly possible to resist—then open the book and feast your eyes on the text—it’s printed in dark red ink! Double. Swoon.

Like his father before him, 17-year-old Theseus Cassio Lowood—call him Cas, as he thinks his name is ridiculous—is a ghost hunter. For the last three years, he and his Wiccan mother have been constantly on the move, going wherever his work takes him. There’s no reason that Thunder Bay, Ontario—the job or the school—should be any different from the last 12 high schools he’s attended.

But it is. It’s different because Anna is more powerful than any ghost he’s ever gone up against—he describes her as “Bruce Lee, the Hulk, and Neo from The Matrix all rolled into one”—and it’s different because, for the first time, he has outside help. He’s used to calling on those in the know, like his father’s mentor**, but this time, it’s coming from outsiders—regular kids from his high school who get involved accidentally. To his surprise, despite his rebuffs and Anna’s terrifying power, they refuse to be brushed aside or scared off.

Cas’ new friends will remind casual Buffy fans of the Scoobies (Thomas the telepathic witch parallels Willow, while cheerleader Carmel could be the child that Xander and Cordelia never had), and the friendship storyline may remind more hardcore fans of the episode “The Wish.” Supernatural fans, meanwhile, will notice that Cas has traits of both Winchester brothers: he has Sam’s mixed feelings about his calling, but at the same time, he also has Dean’s pride in the job.

Ghost hunting in Cas’ world is no joke. As expected, it’s terrifying and often deadly, but it’s also disgusting and mega-grisly. Dangerous, spooky, bloody fun is all well and good (to read about), but the kicker is Cas’ voice, which is hard-boiled and grimly funny:

And maybe he’s right. Maybe it is my fault. I could have found another way to Anna. But to hell with that. Mike Andover hit me across the back of the head with a plank and threw me in an abandoned house, all because I talked to his ex-girlfriend. He didn’t deserve to be split down the middle, but he had a kick in the nuts coming to him at the very least.

It’s a rare thing, nowadays, for me to be left wanting more at the end of a paranormal. So to say that I was disappointed upon reaching the conclusion and realizing that it might be a stand-alone actually means something. But then I checked Blake’s blog, discovered that Anna is the first in a duology and was extremely relieved.

*If you aren’t, you’re totally missing out, so you should probably just get off your high horse and come into the fold. (We’re not a cult, I swear. Or... well, we aren’t a bad cult.)

**In stories like this, there’s always a mentor of some sort: The Winchester brothers have had Bobby Singer, Buffy has Rupert Giles, Cas has Gideon Palmer. Gideon, like Giles, is very British and tweedy and says things like “Yes. Thank you for the entirely incomprehensible pop-culture references.”