Dispatch from the 2019 Kirkus Prize Ceremony 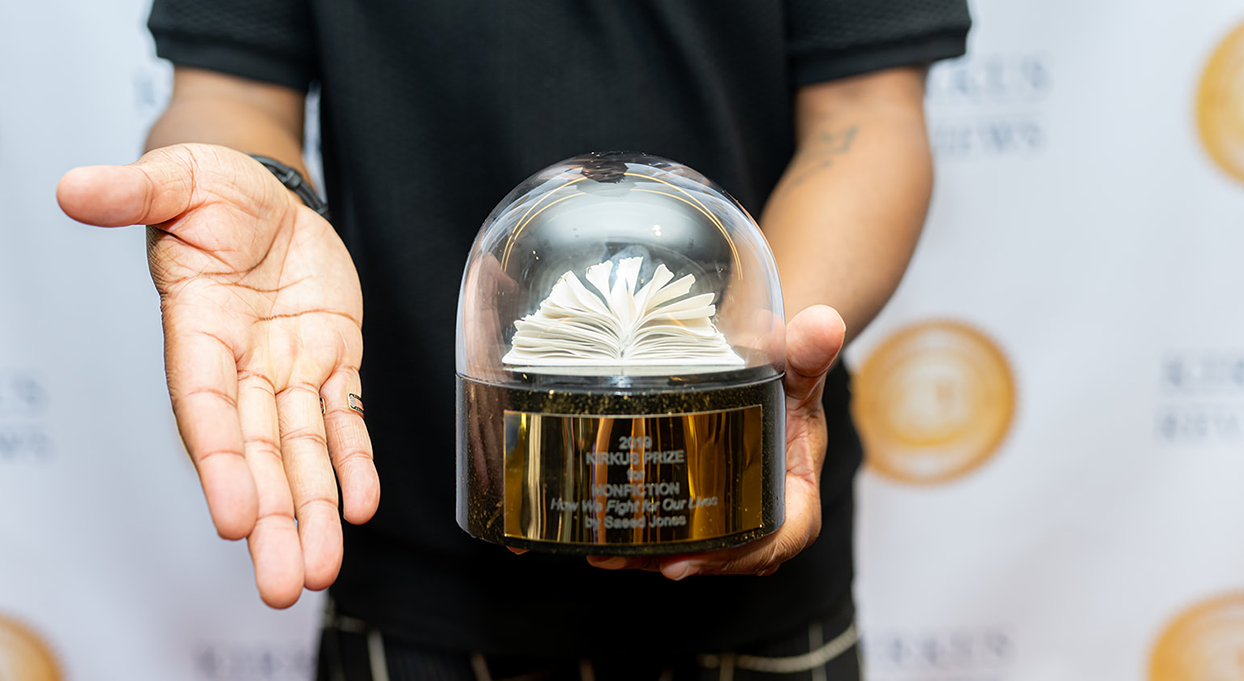 Nonfiction winner Saeed Jones with the trophy designed by Vezzini Chen. Photo by The Papes

It’s that time of year again—when Kirkus Reviews announces the winners of the Kirkus Prizes in fiction, nonfiction, and young readers’ literature. This year’s ceremony, the sixth annual, took place Oct. 24 in the light-filled special event center of the Central Library in Austin, Texas, as wait staff passed hors d’oeuvres, wine flowed, and literary folk mingled. This year’s winners were chosen from among the 1,264 titles that received Kirkus Stars between Nov. 1, 2018, and Oct. 31, 2019. Each winner received a $50,000 cash prize and a trophy by London-based designers Vezzini Chen. Judges’ statement: “New Kid is a laugh-out-loud combination of art and story that showcases the beauty of graphic novels. Author and illustrator Jerry Craft, along with colorist Jim Callahan, illuminates the angst of an African American child leaving his neighborhood to start seventh grade in a predominantly white private school. We are invited to befriend Jordan, the likable protagonist, as well as the richly drawn members who inhabit his communities. In this intergenerational story, every character is treated compassionately. It could only be written by someone who himself has responded to microaggressions and successfully navigated power structures. Jordan Banks is a code-switcher, an activist, and a peacemaker, a superhero for us all.”

Finalists for the Young Readers’ Literature Prize: The Undefeated by Kwame Alexander illustrated by Kadir Nelson (Versify/HMH); Imagine by Juan Felipe Herrera illustrated by Lauren Castillo (Candlewick); On the Come Up by Angie Thomas (Balzer + Bray/HarperCollins); The Other Side: Stories of Central American Teen Refugees Who Dream of Crossing the Border by Juan Pablo Villalobos, translated by Rosalind Harvey (FSG); Genesis Begins Again by Alicia D. Williams (Caitlyn Dlouhy/Atheneum). THE 2019 KIRKUS PRIZE IN FICTION

Judges’ statement: “Colson Whitehead’s The Nickel Boys evokes race in America not as a concept but as a condition of being. In this modern historical novel, Whitehead exposes the Nickel Academy and the fate of its boys. With profound compassion and the elegance of a skilled craftsman, he reveals the tragedy of our not-too-distant past, which is also the tragedy of our present. Like all classics, the book works on many different levels: A significant social drama, it is direct, accessible, and unrelenting both as allegory and as cautionary tale. This is our history. It is our story.” THE 2019 KIRKUS PRIZE IN NONFICION

How We Fight for Our Lives: A Memoir by Saeed Jones (Simon Schuster)

Judges’ statement: “How We Fight for Our Lives: A Memoir, by Saeed Jones, is a tightly crafted work that explodes with vitality. Like the best of memoirs, Jones’ is a journey of exploration, discovery, and reassurance. Yet, through his years of coming-of-age and coming out, he does not travel alone. His journey is our journey—the reader’s and, most importantly, society’s. His self-reflection forces our own. His tenacious honesty compels us to be honest with ourselves. His experiences—negotiating grief, family dynamics, and a forthright identity—require our reckoning. How We Fight for Our Lives is never pushy, preachy, or emphatic; it is simply palpable and seductive and, with just the right touch at just the right moments, delightfully humorous. Saeed Jones has given us a book for the ages.”

Finalists for the Nonfiction Prize: Go Ahead in the Rain: Notes to A Tribe Called Quest by Hanif Abdurraqib (Univ. of Texas); When Death Takes Something From You Give It Back: Carl’s Book by Naja Marie Aidt, translated by Denise Newman (Coffee House); Say Nothing: A True Story of Murder and Memory in Northern Ireland by Patrick Radden Keefe (Doubleday); The Ungrateful Refugee: What Immigrants Never Tell You by Dina Nayeri (Catapult); No Visible Bruises: What We Don’t Know About Domestic Violence Can Kill Us by Rachel Louise Snyder (Bloomsbury)

All Photos by The Papes