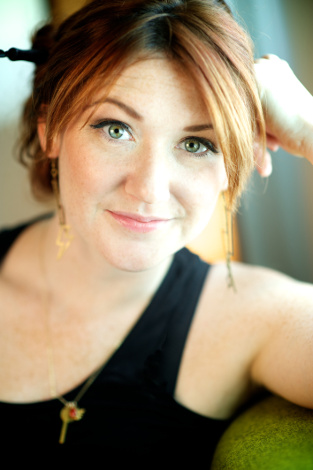 “Definitely the peacock spider: he’s colorful, he’s fuzzy, he does a little dance,” Barton says by phone from L.A. “Have you ever seen a peacock spider dance?! You have to go to YouTube right now. It’s cool—I’ll hold.”

“Right?! It’s maybe the happiest thing in the world. He’s like my spirit animal. He’s my spirit arachnid.”

You won’t have to try to love I’m Trying to Love Spiders (ages 3-5)—Barton’s exuberance is infectious, and it’s apparent on every page. Her third children’s book as an author-illustrator (This Monster Needs a Haircut, 2012, This Monster Cannot Wait!, 2013) is done in pen and ink, hand-lettered, and colored in Photoshop.

“When I started out, I saw myself as more of a visual artist who also kind of wrote stuff. My father worked for newspapers, so I think I saw that as, ‘Those people are ‘real’ writers—I draw monsters,’” says Barton, who earned her first starred review from Kirkus for I’m Trying to Love Spiders. She’s at work on a fourth children’s book and a YA novel, among other writerly projects.

“Maybe I feel a little more legit now,” she laughs.

As her latest title suggests, learning to love spiders—much like writing—is a process subject to failures and triumphs.

“Like this spider right here. I’m gonna try really hard to like him. Maybe if I study him for a while ... I think it’s working ...” Barton writes beside an orange magnifying glass trained on a spider’s multi-eyed mug.

“We’ve all squished spiders,” Barton says. “The art that I make in kids’ books has always been about trying to say the thing that everybody’s thinking. That’s something that really connects people—when someone is super honest, when they share what they’re really feeling. That’s a special, beautiful thing—how everyone, regardless of age or how they grew up or where they’re from can connect at these places like, ‘Oh, I said the wrong thing, or I totally messed that up, or I didn’t want to get my hair cut, and it kind of freaked me out.’ ”

Or, I’m kind of freaked out by spiders!

“Maybe it’s the fact that almost all spiders are venomous? Spiders can’t chew very well. (Much like your baby sister.) They need liquid foods!—Milk—Creamed corn[.] Since no one’s invented a tiny spider-sized blender... piders rely on their venom to dissolve their dinners, making bugs soft and slurpable!—I’ve always wanted to be a smoothie!” she writes.

Gross! But also strangely ensnaring. Barton fascinates with plenty of eye-popping arachnid trivia, like the fact that a single spider can consume over 75 pounds of bugs in one year. There are 40,000 known species! They each have eight eyes.

“The [intended] age group is sort of the age where kids are deciding what they’re afraid of and what they’re not afraid of, and it’s an exciting thing to me,” Barton says. “I’m hoping to reach the kid who hasn’t quite decided—maybe they’re thinking that spiders are just really cool instead of screaming or running.”

They may even find a favorite among the dozen-plus species adorning the endpapers: the happy face spider “(has a happy face pattern on its back—so cute!),” the diving bell spider “(stores air in underwater webs so it can live almost entirely underwater!),” the writing spider “(draws a zigzag pattern in its web with silk),” or the bold dancing peacock. (Probably the peacock.)

“If someone came to me and said my daughter or my son or my nephew or niece is so excited about spiders now, how cool would that be?” she says. “If they want to ask questions about them, or they want to go see the creepy spider exhibit at the American Museum of Natural History—if they want to learn more because of my book, then I have the best job in the world.”