Best of 2021: Our Favorite Adaptations 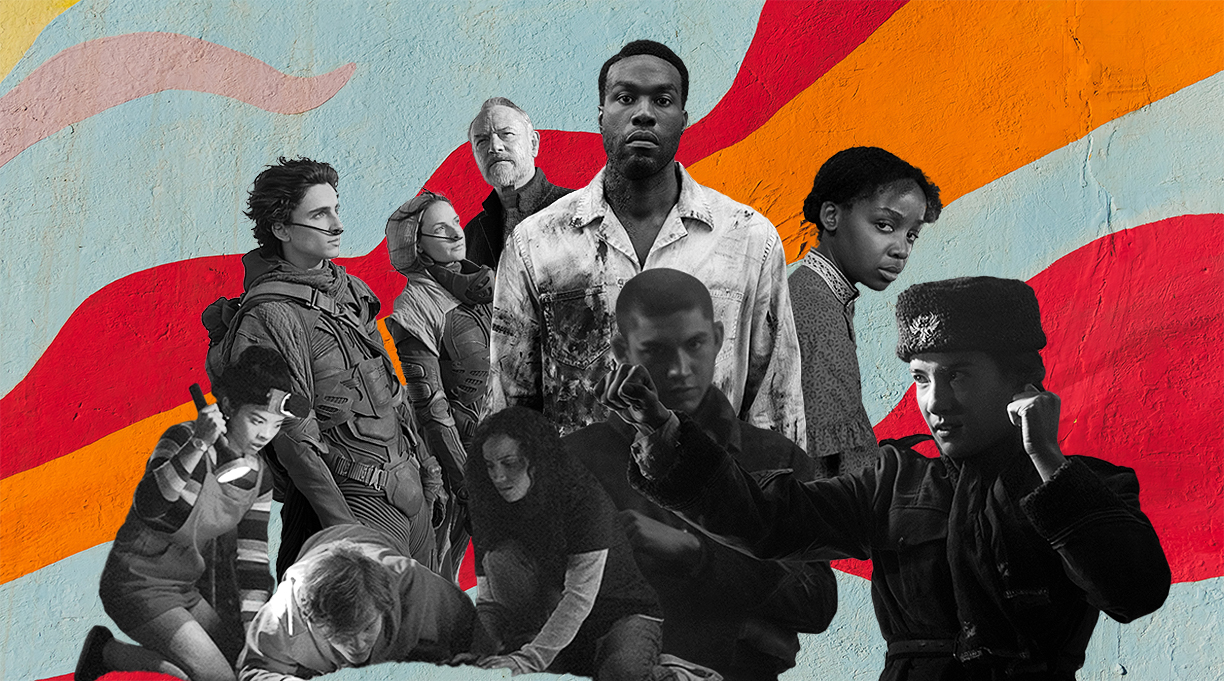 Although movie theaters are still struggling to recover from the effect of the Covid-19 pandemic, streaming services have taken up the slack with a wide array of book-to-screen adaptations. Here are eight highlights from the past year, in chronological order—all currently available on streaming services or on video-on-demand.

Shadow and Bone (streaming on Netflix)

The first season of this new series, based on Leigh Bardugo’s bestselling Grishaverse YA fantasy novels, tackles the events of the first book, Shadow and Bone, and also introduces major characters from such later installments as  Six of Crows and  Crooked Kingdom. Alina Starkov (ably played by Jessie Mei Li) is a lowly mapmaker in an Imperial Russia–like fantasy realm who finds out that she’s a rare Sun Summoner with the supernatural ability to manipulate light. If she can master her powers, she may be able to destroy a massive, monster-filled region of inky blackness known as the Fold. In a parallel narrative, a group of criminals led by the cynical Kaz Brekker (a charming Freddy Carter) undertake a highly dangerous mission that requires them to go through that very Fold. Overall, it’s an engaging show that will satisfy longtime fans and serve a fine introduction to Bardugo’s sprawling fictional world.

Academy Award-winning filmmaker Barry Jenkins took on a daunting task in adapting Colson Whitehead’s Kirkus-starred 2016 novel, The Underground Railroad, as a miniseries; after all, it’s a book that won the Pulitzer Prize, the National Book Award, the Andrew Carnegie Medal for Excellence in Fiction, and the Arthur C. Clarke Award. Jenkins met the challenge with a riveting work of quiet, sustained power—one that’s easily the best book-to-screen adaptation of the year. It tells an alternate-history tale of the American South in the early 1800s, in which engineering is far more advanced, allowing such things as skyscrapers and the literalized, interstate, subterranean transit system that gives Whitehead’s work its title. However, slavery remains firmly in place, and the book and series both focus on the story of Cora (movingly played by Thuso Mbedu), who escapes her enslavement in Georgia only to be pursued by an obsessive man named Ridgeway (a terrifying Joel Edgerton). Jenkins tackles Whitehead’s detailed fictional world with gorgeous imagery—an sequence of two people falling, in slow motion, off a ladder will stick with viewers for a long time—and he gets blockbuster performances from his cast along the way.

This unusual thriller is based on the 2001 novel The Enemy’s Cosmetique by Belgian author Amélie Nothomb, in which a businessman, Jérôme Angust, meets a man named Textor Texel while waiting for a flight at the airport. The odd stranger tells Angust a series of upsetting stories, including confessions of horrifying crimes that eventually intersect with events in Angust’s past. Spanish filmmaker Kike Maíllo’s twisty English-language film version makes a few changes to the source material, including casting Textor as a woman (chillingly played by South African actor Athena Strates). Polish actor Tomasz Kot, who previously co-starred in the acclaimed 2018 film Cold War, also does fine work as Angust, whose dark secrets come into focus as the film goes on. The result is a Hitchcockian tour de force—an unrelentingly tense and disturbing work that occasionally swerves into surreal territory.

This new film series is loosely based on R.L. Stine’s bestselling teen horror novels, which all take place in the fictional town of Shadyside. Each of the movies, all stunningly directed by Honeymoon’s Leigh Janiak, is set in a different year—1994, 1978, and 1666—but they collectively tell a single story that dedicated horror fans are sure to love. They involve a series of gruesome murders in Shadyside over the course of hundreds of years—including a mass-killing of kids at local Camp Nightwing in 1978—and some locals believe that they’re all connected to a 17th-century witch’s curse. The truth is a bit more complicated, however, resulting in a gory tale that compellingly addresses issues of class, homophobia, and sexism. All the films feature rock-solid performances, with Trinkets’ Kiana Madeira, who’s excellent in multiple roles, as a standout.

Oscar-winning filmmaker Jordan Peele co-wrote this sequel to the well-regarded 1992 film Candyman, inspired by Clive Barker’s 1985 story “The Forbidden.” In the original tale, which appeared in the fifth volume of Barker’s Books of Blood story collections, a ghostly, supernatural killer known as Candyman terrorizes a council estate in Liverpool, England; its 1992 adaptation moved the action to the Cabrini-Green housing projects in Chicago and gave Candyman a new origin as the vengeful spirit of a Black painter, murdered by a racist mob. This follow-up, directed by Little Woods’ Nia DaCosta, delves further into the generational consequences of racist violence while also delivering a pulse-pounding horror thriller. It’s anchored by the indelible performance of Watchmen’s Yahya Abdul-Mateen II as an artist whose research into the Candyman legend leads to unexpected revelations.

Isaac Asimov’s Hugo Award–winning SF series finally hits the screen in this new streaming series, which offers a loose but fascinating interpretation of its source material. The initial episodes use the events of the Asimov’s 1951 series starter, Foundation, as a jumping-off point: In a far-future society, professor Hari Seldon (ably played by Mad Men’s Jared Harris) has pioneered a science called psychohistory, which uses mathematics to broadly predict future events. He asserts that the current galactic empire will fall within a few centuries, to be followed by a dark age of tens of thousands of years. However, Seldon says, this latter period can be shortened if the empire funds a new Foundation project to create an encyclopedia of all human knowledge. At this point, the show diverges from the text and brings in new elements, including cloned emperors, robots, and plenty of CGI eye candy. In many ways, it’s a brand-new space opera, but it never abandons the spirit of Asimov’s chatty novels of ideas—and it’s certainly compelling in its own right. Lee Pace, who portrays multiple emperors, is particularly great, which will come as no surprise to fans of his work on the underrated AMC show Halt and Catch Fire.

Argentine author Samanta Schweblin co-wrote the screenplay for this Spanish-language movie version of her Kirkus-starred 2017 novel, directed by Oscar-nominated Peruvian filmmaker Claudia Llosa. A woman named Amanda lies dying as a mysterious child questions her about her recent past. The delicate and complex storytelling structure is the major draw here, and to reveal too much of the plot would likely spoil it; gradually, however, a strange and compelling story of toxic pollution, endangered children, and supernatural intervention is revealed. Along the way, both works affectingly address environmental issues and parental anxieties while also calling to mind modern horror classics such as Stephen King’s Pet Sematary. The film also features an intense performance by Spanish actor Maria Valverde, who was equally notable in the underseen 2008 Spanish historical drama, The Anarchist’s Wife.

Oscar-nominated director Denis Villeneuve’s film of the first half of Frank Herbert’s award-winning (and problematic) 1965 SF-fantasy epic, Dune, is most notable as a visual spectacle. The deserts of the planet Arrakis, where two dynasties battle over a valuable resource known as “spice,” are vast and glittering, with massive and monstrous sandworms burrowing beneath them. The director also shows a great deal of storytelling skill; he gets across Herbert’s incredibly detailed worldbuilding with stark economy while telling the tale of Paul Atreides (played by Timothée Chalamet), the son of a duke who may, in fact, be a prophesied messiah. The supporting cast does fine work here, too, with special mentions going to Oscar Isaac as a surprisingly warm Duke Leto Atreides and Doctor Sleep’s Rebecca Ferguson as Paul’s mother, Lady Jessica, an intense member of a powerful sisterhood known as the Bene Gesserit.