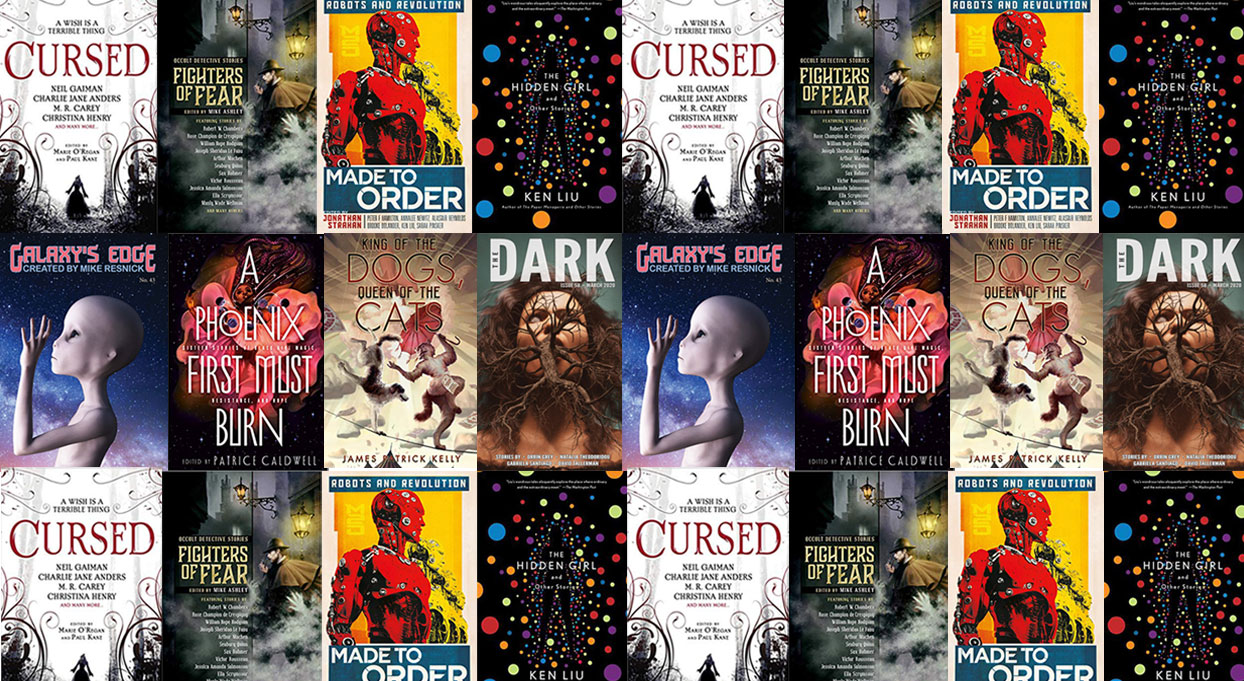 If life is a journey, I like to think that the stories I read are the sights I see along the way. Reading novel after novel, while enjoyable, can make that landscape a little monotonous. That’s why I like to mix up my reading with short fiction. Stories are like roadside attractions that make the longer drive worthwhile.

My latest adventure in short fiction took me to Ken Liu’s The Hidden Girl and Other Stories (Saga/Simon Schuster). Liu’s second collection only reinforces his mastery of the short form. Take, for example, the collection’s opening story, “Ghost Days,” which links three characters across four centuries. The first character is a genetically engineered girl on a colony planet not fit for unaltered humans. Her task of paying homage to humanity’s past serves as a launch point to introduce two earlier generations suffering a similar displacement, while weaving a relatively complex tapestry about belonging and respect for history. In the powerful near future story “Thoughts and Prayers,” Liu depicts, with chilling believability, the online trolling culture in the wake of a school shooting. After a grieving mother lends her daughter’s image to a political crusade, she’s surprised by the slew of lies, anger and disrespect that follows. In “The Hidden Girl,” a youngster is taken from her family and trained to be a ninja assassin. She becomes adept at using a supernatural skill employed by the assassins, but her sense of morality has her considering an alternate path. The story forces us to reconcile our own actions against our values.

Next stop: the big top! Adding to the genre of fantastic fiction that revolves around a circus is King of the Dogs, Queen of the Cats by James Patrick Kelly (Subterranean Press). It’s set on Boon, a planet populated by upper-class humans, lower-class cats, and dogs who have been uplifted—that is, scientifically altered to have greater intelligence. The Supremacy, the government of Boon, is in dramatic decline. Two senators—Gio Barbaro and his elder brother, Fra—are clones of the Supremacy’s original founder. Gio has little taste for politics; he’d rather investigate the first-ever circus that has come to Boon, and its controversial show that includes cats and dogs performing as equals alongside humans. Gio’s involvement with the circus leads him down a road that threatens the already strained influence of the Supremacy. Kelly’s execution strikes a perfect balance; not only does the story portray cats and dogs as full-fledged, lifelike characters, it also successfully handles politics and equality in a way that’s entertaining and not preachy.

Robot stories may be one of the oldest tropes in science fiction, but you wouldn’t know it from reading the inventive tales in Jonathan Strahan’s anthology Made to Order: Robots and Revolution (Solaris, March 17). In Alastair Reynolds’ “Polished Performance,” the robots on an interstellar ship are faced with a mid-voyage catastrophe. Their solution is quite creative and often laugh-out-loud funny. Suzanne Palmer offers a solid story with “Chiaroscuro in Red,” about a young man named Stewart, whose parents buy him a robot for his birthday. Robots are usually not owned by one person; instead, their proxy owners share the money the robot earns through labor. Stewart’s robot is, unfortunately, an older model—a situation that shines light on the role that jobs play in our lives.

A Phoenix First Must Burn, edited by Patrice Caldwell (Viking Books, March 10), is a themed anthology of young adult SF/F stories exploring the black experience. If the two stories I read are any indication, it’s an anthology full of gems. The first, “Wherein Abigail Fields Recalls Her First Death and, Subsequently, Her Best Life” by Rebecca Roanhorse, is a weird western treat. We meet Abigail, 16, lying in the desert, with a gunshot wound inflicted by an old family enemy. Abigail’s resolve for revenge captures the attention of the desert spirits, who aid her plot. This does not sit well with Mo, the only family she has left. Abigail asserts herself, much to this reader’s enjoyment, risking love for vengeance. In “The Curse of Love” by Ashley Woodfolk, a girl comes to terms with the magical blessing bestowed upon the women of her family, and the curse that lies hidden within it. Young Aubrey and her aunt are the last of the Dunn women, and the promise of love threatens to trigger the family curse. Woodfolk expertly teases the mystery behind their predicament, pulling readers along to its satisfying ending.

Curses take center stage in Cursed, edited by Marie O’Regan and Paul Kane (Titan Books, March 3), an anthology offering several creative twists. In “As Red as Blood, as White as Snow,” for example, Christina Henry offers a gripping reimagining of the “Snow White” fairy tale. While most fairy tales end happily, here Prince Charming’s opening proposal to Snow White is ominous. Unfitting of his name, Charming is truly evil and it is only Snow’s magical lineage that prevents her from falling immediately under his spell. Henry delivers nail-biting suspense while Snow’s slow-burn plan of escape progresses.

I have only just begun to dig into the weird treasures found in Mike Ashley’s anthology Fighters of Fear (Talos), with its 31 occult detective stories from yesteryear. Imagine Sherlock Holmes with a dash of the supernatural and you’ll have a good handle on what to expect. The detective in Ella Scrymsour’s dread-inducing “The Room of Fear” is Sheila Crerar, a psychic who investigates supernatural phenomena, such as a haunted room in which three people died of heart failure. To witness the problem firsthand, Crerar spends several nights there and feels unbearable amounts of fear, with good reason. Another story is “The Woman With the Crooked Nose” by Victor Rousseau. Detective Ivan Brodsky works as a professor of nervous diseases, a quaint way to match him up with strange goings-on. This mystery is about a sick woman with an imperfect nose and a ghost that bears her resemblance, except for its perfect facial features. The woman’s sister blames the victim’s new husband, but Brodsky and his assistant, who is also the narrator, turn toward more supernatural causes. The mystery is solved in short order and provides readers with a taste of the paranormal treats waiting to be sampled in the rest of the volume.

Galaxy’s Edge is a terrific magazine delivering refreshing, new science fiction, but it was a reprint that attracted my attention in Issue 42. “The Sixth Palace,” by Robert Silverberg, was written in 1965, but has lost none of its appeal. That may explain why, as Silverberg himself noted, it’s been anthologized many times. The story uses an old trope—a treasure that is guarded by a powerful protector—but Silverberg trades the typical “cache of gold guarded by dragon” theme for priceless artworks guarded by a powerful robot on a small moon. Two fortune seekers attempt to pass the robot’s test of worthiness. The second one learns from the mistake of the first, but even he cannot predict the complexity of this particular trial. This story is fun for its puzzle-solving aspect and also exhibits a classic science fiction technique: the twist ending.

The January issue of The Dark Magazine offers Angela Slatter’s excellent, atmospheric, “No Good Deed.” It’s set in her Sourdough world, which is based on classic Grimm fantasy tales, though you’d be hard-pressed to recognize this one with its gothic horror dressing. Isobel is a new bride who awakens, she thinks, on her wedding night with no recollection of what happened that day. Was she truly married to Adolphus Wollstonecraft? Why is she so starved and hungry? Why is it so dark, and why does she seem trapped? The answer to that last question may not be surprising, but what follows certainly is, as Isobel learns of her new way of afterlife and the sweet taste of revenge.