Get Ready for the ‘Nadia’ Cinematic Universe 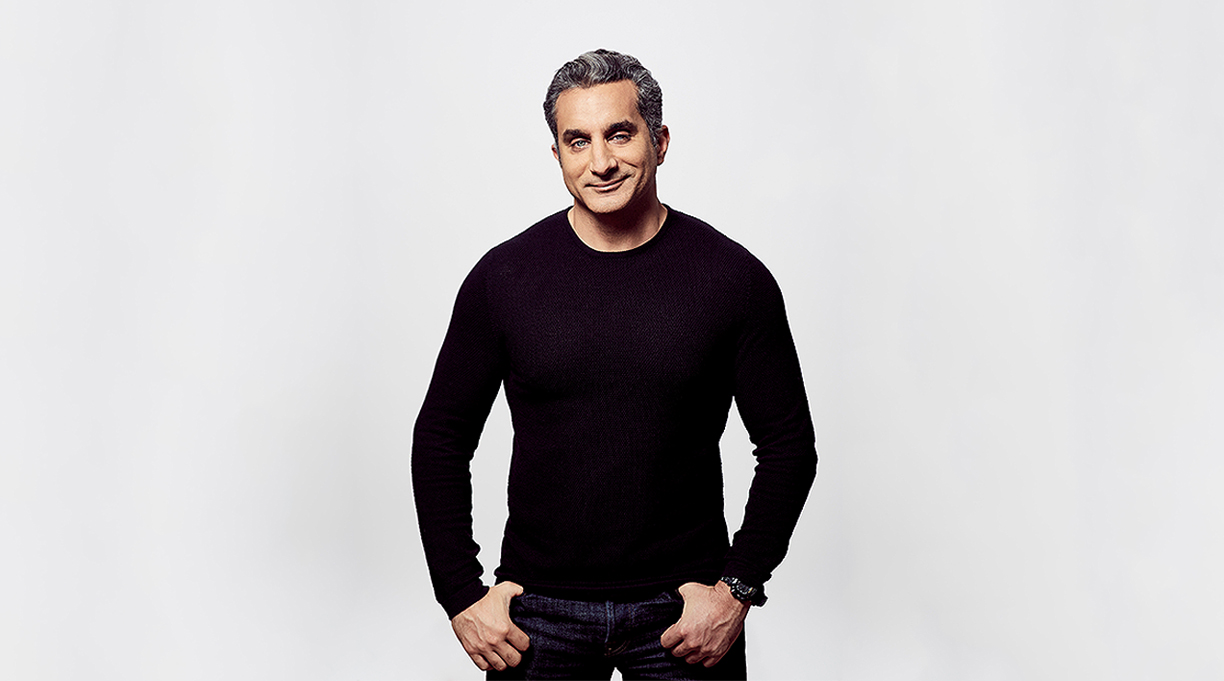 You may know the handsome man on the cover of Kirkus Reviews’ Feb. 15 issue from star turns on The Daily Show With Jon Stewart or The Late Show With Stephen Colbert or as the host of the wildly popular Egyptian news satire program Al-Bernameg (2011-2014). Maybe you saw him in Time in 2013, when he was named one of the world’s most influential people. Or perhaps he was the cardiothoracic surgeon who mended your heart.

“I tremendously enjoy the opportunity to learn something new, to do something new,” Bassem Youssef tells Kirkus by Zoom from the UAE. (The Egyptian-born surgeon-turned-satirist, who lives in Los Angeles, is filming a web series on plant-based nutrition in Dubai.) “Some societies, some people focus on the goal to target. I find myself enjoying the journey much more.”

If you’re a lover of young readers’ literature, you’ll soon know Youssef as a magnificent middle-grade author. The Magical Reality of Nadia (Scholastic, Feb. 2), co-authored by Catherine R. Daly and illustrated by Douglas Holgate, chronicles the adventures of Egyptian American sixth grader Nadia Youssef as she navigates friendship, family, and her California middle school. Inspired by Youssef’s own daughter, Nadia is curious and empathetic, loves fun facts, collects bobblehead dolls, and proudly leads a group of friends known as the Nerd Patrol. With a little help from an ancient Egyptian teacher trapped in a hippopotamus amulet (long story), she learns some profound historical lessons with modern-day applicability.

Powerhouse Animation Studios will adapt The Magical Reality of Nadia into a television series starring and produced by Youssef. A second book in the series is already in the works. Our conversation has been edited for length and clarity.

Great, here we go: Nadia is always eager to grow her bobblehead collection, which includes likenesses of Queen Elizabeth, Amelia Earhart, and Yoda. If I could give her a bobblehead for her next birthday, I’d give journalist and civil rights leader Ida B. Wells. Who would you give her?

Are we talking about Nadia in the book or Nadia in real life? Because Nadia in life is 8 years old, going to 9, and when she read the book, she said, “I do not collect bobbleheads.”

She felt like I am pushing a hobby on her! [Both laugh.] But to answer your question, I would give her a King Tut bobblehead, because I think it’s very important to keep her connected to her history.

I think we have a very cool history—that’s actually the whole reason why I wrote the book. Since I was a little kid, I was fascinated by ancient Egyptian civilization. And of course, when I come to America, we never get credit for anything….Every time I go to D.C. and I see all of these pillars, I say, “Ah! Kind of ours. You may think that they’re Roman, but they kind of took them from us.” [Both laugh.]

Also, I didn’t want just to do a history book. Nadia is in a unique position, where she is the product of two worlds, and I want her to be equally proud of both. And I say this a lot—I’m sorry if I’m babbling. You gave me one thing, and I just took off. So, let me know, stop me, interrupt me any time.

No, I am hungry for your words. I’m at the buffet. You just let it rip.

So, you know, as a comedian—I do stand-up comedy—one of the most common stand-up comedy lines that people use, including myself, is Where are you from? And I think we can do that as a joke. But in reality, people do take offense when they’re asked where they’re from. And I think that is completely wrong….When somebody asks you Where are you from? I would say that’s curiosity. If the second line is get out of my country,you are always entitled to clap back at them and their racist behavior. When people ask me Where are you from? [I say] “from Egypt.” And Nadia, when she’s asked—still today—where she’s from, although she speaks English 10 times better than Arabic, she says, “I’m from Egypt.” I think we should start owning our heritage. America is an incredible place for all people, immigrants from different cultures and from different countries. That is why this country is great. It’s great not because it stopped people from coming in; it is great because it allowed people to come in; and it became this amazing product of minds and hearts and emotions and cultures of people coming from everywhere. I think this should be celebrated everywhere.

What was it like communicating such ideas to a young audience?

Well, I could not do it without the amazing Catherine Daly. When I talked to Scholastic about the idea, they asked me, “Would you like to write it?”

I said, “I have no experience of writing for children. I have an idea, I have a vision, but I need someone to write it.”

I said, “No, they should be equal partners.” And that is why you see our names equally on the book, [which is] hers as much as it is mine. If I gave up with the characters, with ideas, she breathed life into them. She’s lovely, she writes beautifully, and I couldn’t do what she does. She knows how to speak to kids.

I always respected the fact that she has more experience. English is my second language, and I’m not ashamed to say I didn’t do it [on my own]. It would actually be a shame if I take all the credit. Catherine, like many strong women in my life, has helped to elevate me.

Nadia is a strong girl with so many other wonderful qualities. For one thing, I’m awed that she and her friends assume the mantle of “Nerd Patrol” with pride. That’s the level of self-confidence I didn’t have as a young nerd.

I always looked at nerd as being negative because, as a kid, I was one of those nerds. I always say I’m a late bloomer. I think I have Ugly Duckling syndrome. Looking back—I didn’t have a patrol. I was a loner nerd [laughs]. But Nadia I don’t think of like that. She’s loved by all her peers.

And what I love about Nadia—the real Nadia—is her absolute ability for compassion and for empathy. You [can’t] teach that stuff.

What is your hope for Nadia (the character) and this book?

Well, to be very honest, and very blunt, I want it to be a New York Times bestseller. I want it to have the traction it needs so, hopefully, we don’t stop at Book 2. I want it to grow. And maybe we’ll have our own Nadia Cinematic Universe—the NCU.