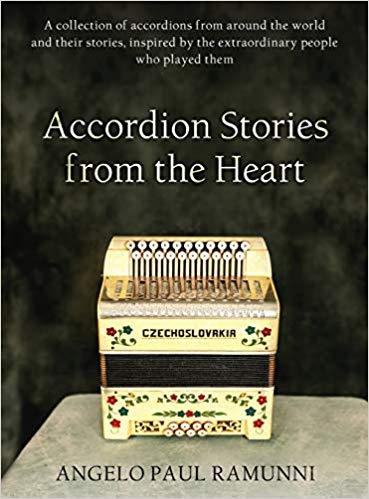 “I’ve told that story about a hundred times. It still gives me goosebumps,” Angelo Paul Ramunni says, referring to the serendipity that led him to create an accordion-based museum in his home in Canaan, Connecticut—and, by extension, his lavishly illustrated book, Accordion Stories From the Heart.

The coffee-table–friendly volume relates many a tale with its full-page photos of accordions in all their hand-crafted, mother-of-pearl–inlay glory, which are “as intricately exquisite as any prized violin or piano,” as Kirkus’ review describes them. One story is about a little Hohner that succored its Russian owner through grim years of totalitarianism in the Soviet Union. Another tells of a Karpek “square box” in Chicago that earned its player command performances before Al Capone. A third relates the acquisition of a Detroit-made 1920s accordion, lovingly, proudly, and painstakingly refurbished by a blind man. In the latter case, Ramunni’s O. Henry–esque narrative concludes:

You might be able to see from the photograph that the cutouts for the treble white keys, for example, are irregular and a bit uneven. There were other inconsistencies and imperfections….He accomplished the refurbishment of this accordion totally by feel.

The stories all have their origin in Ramunni’s own epiphany: “I started as a little kid—10 years old when I grew up in Long Island—playing the accordion. I took lessons and played from 10 to 17. And then I went off to college. And that accordion went into the closet, for 42 years. Fast-forward to 2008, and I found myself in Vermont on vacation with my wife, Marcia. And one day I just woke up, and for no reason I said to myself, ʻI want to play the accordion again.ʼ ”

He phoned the Clock Shop in Vergennes, Vermont, practically at random, asking about accordions for sale. A clerk directed him to a nearby dealer in collectibles of all sorts, from old cars to dollhouses, who had more than 100 accordions available. “I purchased a full-sized Excelsior”—a highly regarded brand among professional accordionists.

“The fact that I thought to call the clockmaker is part of the spookiness of this story,” Ramunni says. “There was no reason for me to think about him as a source of info, since we only visited his shop once in the years previous to then. Without his help, though, I strongly doubt I would have found that private accordion collector.”

While browsing in the dealer’s garage, he stepped over a pile of about a dozen decaying old concertinas—instruments that are similar to accordions but smaller and simpler. When Ramunni asked about them, the dealer said, rather offhandedly, that those had all belonged to prisoners in German concentration camps during the Holocaust.

Ramunni realized that the stories behind many well-worn accordions are veritable ballads of fate, love, loss and triumph. The homey instrument is unique, in his view, for its ubiquitous presence and appeal. When early accordions appeared in early-1800s Europe, he says, they weren’t instruments of courtiers, kings, or princes; no Mozart or Paganini pieces depend on the accordion. “It was apolitical, nonreligious,” he says. “There really was no stigma attached to the accordion. We really need something [else] like it, today.”

The golden age of the classic “piano accordion” spanned 1900 to 1950. “We literally had zillions of them made,” he notes, during a period when there was “some really tough stuff going on in the world.” His book features accordion accounts that serve as soundtracks to two world wars, Prohibition, political upheavals, and the Great Depression.

Tales came to him via visitors and clients at his Canaan-based New England Accordion Connection and Museum Company and from people whom he met during his roving performances with the Excelsior. He became determined to create a book about the accordions and their stories, worthy of any living room. Ramunni studied extant large-scale illustrated books and decided on the classic format: “Take very good pictures and arrange the story of the accordion on a facing page.” The author engaged photographer Jerry Homolka, who used a Nikon D4 Pro digital camera to capture some of the 300 pieces in the home museum. Finishing the manuscript took about a year, he says.

The author, who’s trained as a certified public accountant, says that people have often opened up to him about intimate topics: “I’d sit in a room with people talking about financial issues, and we’d get more to the cause of those financial issues–drug problems, divorce.”  Indeed, Ramunni’s first two self-published books, 2005’s The Poor Catholic: The Road to Grace and 2011’s Left Turn, Right Turn, U-Turn, grew out of his ruminations over highly personal matters. In a similar way, he brings empathy and insight to his stories of the backgrounds of vintage accordions. Accordion Stories From the Heart may appeal to collectors and antique buffs, but it’s no musicologist’s pricing guide or exhaustive visual encyclopedia—it’s the human element that sets the beat.

As a collector, a chronicler, and a musician, Ramunni has felt that beat. He writes, “Accordion players may or may not realize that when they play often in the presence of loved ones, their music can actually stamp an imprint in the minds and memories of those that hear them play. It can be a very strong memory, depending on the depth and type of personal relationship that exists at the time between the player and the listener….As an instrument, it must have been originally conceived of in heaven.”

Although the book is completed, the anecdotes continue. Recently, he says, the museum had a visit from a retired Radio City Music Hall Rockette (“a real high-kicker”), whose age Ramunni estimated as the upper 80s, at least. She was so stooped over she was L-shaped, he says. “We have a jukebox, a 1948/1949 Wurlitzer,” he says, and the woman wanted to hear it play a tune. “She actually asked, ʻWill it play a polka?’ ”

When Ramunni started it up, the accordion melodies completely transformed the old woman; she straightened her body and began doing twirls around the room, dancing and weeping. “She didn’t miss a step!...Being in the room with the accordions, she went from 88 to about 13, 14.”

And another accordion story is born.

Charles Cassady is a reviewer/author in northeastern Ohio, where polkas are always on the hit parade.
MORE FEATURES
POPULAR KIRKUS STARS