The Highs and Lows of a Life in Comics 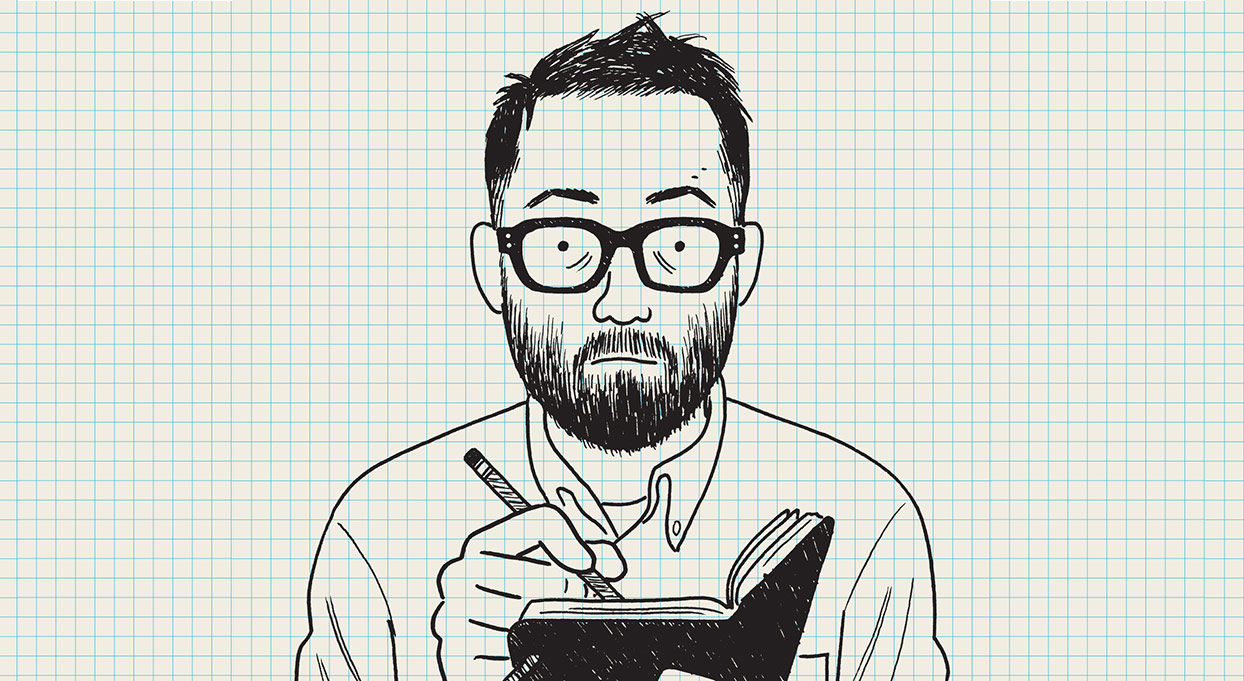 Cartoonist Adrian Tomine knows all the critiques of him and his work, and they get airtime in a wonderfully self-deprecating new graphic memoir, The Loneliness of the Long-Distance Cartoonist (Drawn and Quarterly, July 21). “Everything in [his] oeuvre has been more or less done before.” “Pretty good until [he] started ripping off [Daniel] Clowes.” “Derivative [and] overrated.” “Played-out ‘Gen-X’ pseudo-profundity.” “Cringe-inducing.”

To be fair, Tomine, 46, has won ample acclaim for his graphic books, including Killing and Dying, Shortcomings, and Summer Blonde, and for his long-running comic book series, Optic Nerve. His muted but expressive artwork will be instantly recognizable to readers of the New Yorker magazine, where he has contributed illustrations and covers since 1999, collected in the volume New York Drawings. Zadie Smith, Chris Ware, Junot Díaz, and Jonathan Lethem are fans.

Still, The Loneliness of the Long-Distance Cartoonist presents Tomine’s progress through the comics world as a series of mortifying episodes where the “boy wonder of mini-comics” finds his high self-regard challenged by bad reviews, dismissive peers, indifferent elders, prickly stalkers, sparsely attended book signings, attitudinal booksellers, and overheard restaurant conversations. It’s both endearing and comical—but it couldn’t have been very enjoyable for the artist to revisit these humiliations, could it?

“This was the most fun I’ve had making a book in my whole career,” Tomine counters in a Zoom call from his Brooklyn apartment in late June. “Maybe it says something about my personality, or maybe there’s just been enough distance, but there were times when I’d actually start laughing to myself at my drawing board as I was working on some of these strips.”

The design of Long-Distance Cartoonist suggests an artist’s sketchbook, with an “If found, please return to” inscription and graph-paper pages. There is no color work. Tomine says he employed a looser style than usual: “I didn’t want to have a long, arduous prep period where I’m planning it out and figuring everything out to the nth degree. I was hoping that this book, as much as possible, would be like my cartooning version of handwriting—in other words, spontaneous and direct from my hand.”

The story opens with Tomine in front of his third grade class in Fresno, California, announcing his plan to become a “famous cartoonist” and geeking out big-time. (The serial humiliations start here.) It follows him as he attends Comic-Con, where he is nominated for an Eisner Award only to have presenter Frank Miller skip over his last name: “I’m not even gonna try to pronounce that one!” (Tomine is Japanese American, making him a sometimes-uncomfortable fit in the predominantly White comics world at the time he was starting out.) He goes on book tour, does duty as a “celebrity guest” on a comic book cruise, is interviewed by Terry Gross for “Fresh Air,” gets married, has kids. Along the way he nurses his grudges, behaves awkwardly, endures fresh slights, and…just keeps at it. Even a health scare—and the attendant self-reflection—don’t deter him from a single-minded pursuit of his career.

“What I tried to capture—and what making this book made clear to me—is just how much the process [of drawing cartoons] is really an embedded part of my brain,” says Tomine, who began publishing Optic Nerve when he was 16. “For the last two or three books, every time I finish, I have this feeling of, ‘I’m done. I’m never going to do another comic, I’m going to find some other job, I’ll find some way to make money.’ And then I always end up doing it again.”