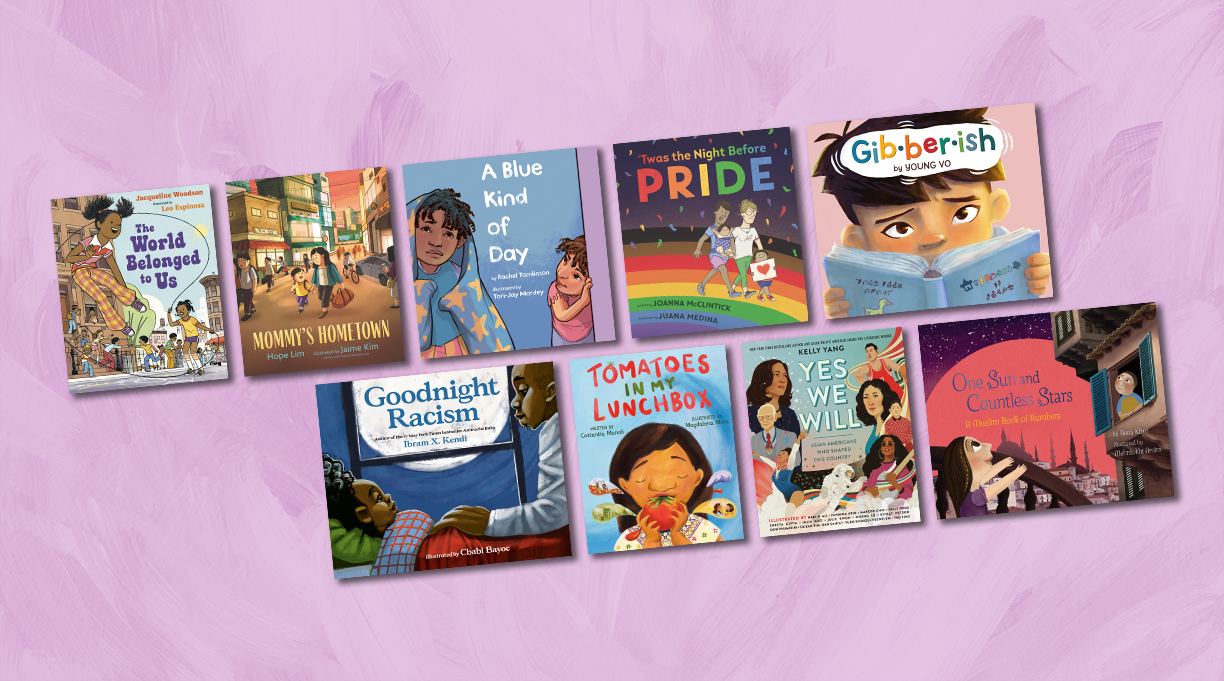 Background by Kseniya Lapteva on Unsplash

When I was a child, books were a refuge, a second home, but a place where I rarely saw characters who looked like me. Decades later, kid lit depicts a far richer array of experiences and identities. Inclusive picture books are especially powerful; there’s something special about seeing yourself in a story even before you can decipher the words on the page. I’m heartened to see picture books with incidental diversity—neighborhoods and communities that happen to feature people of various races, genders, and abilities. But I’m particularly moved to see so many stories that move in for a close-up view of people from marginalized identities, books that allow all children to see themselves in radiant, resplendent color. Here are some new and upcoming examples.

Gibberish (Levine Querido, March 1) by Young Vo follows Dat, a young Asian immigrant and a stranger in an even stranger land. Dat’s new country is initially a black-and-white world populated by well-meaning but grotesque creatures who speak in indecipherable symbols, but it slowly fills with color as Dat acclimates—a dynamic visual metaphor.

A Blue Kind of Day (Kokila, April 5) by Rachel Tomlinson, illustrated by Tori-Jay Mordey, centers on a young Indigenous Australian boy grappling with depression. Featuring a muted palette that makes heavy use of the titular hue, this story matter-of-factly acknowledges that while depression can’t be “fixed,” the support of a loving family can still make a great impact as children confront big emotions.

In Mommy’s Hometown (Candlewick, April 12) by Hope Lim, illustrated by Jaime Kim, a parent and child return to the mother’s childhood home. Though things have changed since Mommy’s youth—the idyllic countryside town is now a bustling metropolis—the pair still find ways to recapture her memories. Cozy illustrations and upbeat text bring to life a quiet, heartfelt reflection on change, set in Korea.

With anti-Asian hate crimes on the rise, Yes We Will: Asian Americans Who Shaped This Country (Dial, May 3) by Kelly Yang is a stirring, all-too-necessary reminder that Asian American history is U.S. history. Concise text, accompanied by stunning illustrations from 12 Asian American artists, shines a glorious spotlight on politicians, designers, activists, and athletes, among others.

The World Belonged to Us (Nancy Paulsen, May 10) by Jacqueline Woodson, illustrated by Leo Espinosa, is an exuberant love letter to Brooklyn summers. The retro-style artwork suggests a 1960s or ’70s setting, populated by Black, brown, and White children—a reminder that despite the overwhelmingly White landscape of kid lit, the real world has always been far more diverse.

Joanna McClintick’s ’Twas the Night Before Pride (Candlewick, May 10), illustrated by Juana Medina, relies on verse modeled after Clement Clarke Moore’s ode to Christmas and cheery cartoonish images depicting a family made up of two mothers—one light-skinned, one brown-skinned—and two tan-skinned little ones as they prepare for a pride parade. Despite the buoyant tone, McClintick and Medina go on to offer an age-appropriate but honest explanation of Stonewall.

Tomatoes in My Lunchbox by Costantia Manoli, illustrated by Magdalena Mora (Roaring Brook, June 21), uses elegant yet accessible language, paired with impressionistic artwork, to convey a young, brown-skinned immigrant’s alienation—biting into the tomatoes their mother packed for lunch “tastes like home” but leaves the protagonist feeling self-conscious when tomato juice spurts out onto their shirt.