8 YA Books for Budding Teen Journalists 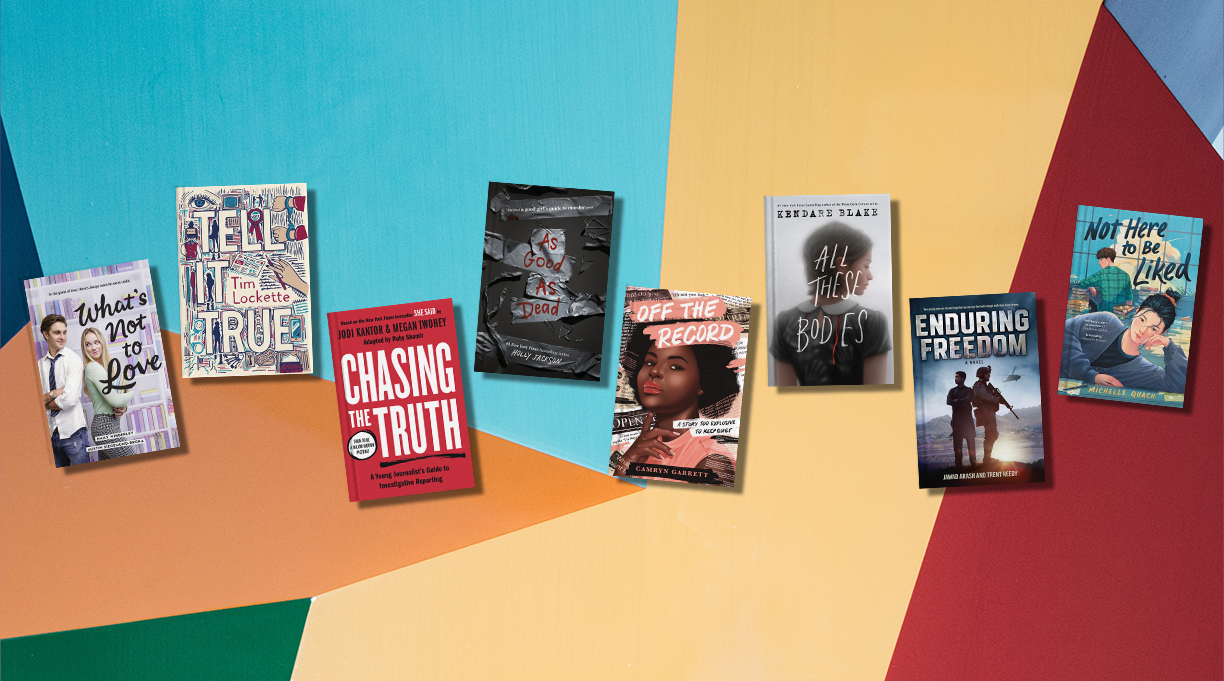 Working on the student paper is a formative experience for many teens—an opportunity to make their voices heard on issues that matter to them, to bond with like-minded peers, and to learn the fundamentals of a profession that is essential to preserving democracy. Even as the survival of U.S. newspapers is threatened, young readers have a variety of superb 2021 releases centered on journalism that will provide entertainment and inspiration.

All These Bodies by Kendare Blake (Quill Tree Books/HarperCollins, Sept. 21): There’s a serial killer on the loose in the 1950s Midwest. When teenage Marie is found covered in blood at the site of a multiple homicide, the only person she agrees to speak with is Minnesota high school student Michael, who dreams of becoming a journalist. Michael gets a crash course in interview techniques as Marie’s story unfurls and the truth proves elusive.

Off the Record by Camryn Garrett (Knopf, May 18): When teen journalist Josie wins a national entertainment magazine’s writing competition, she gets to travel on a movie press tour that comes with access to its handsome young star. But rather than writing a celebrity puff piece, she uncovers a story with the potential to destroy a powerful, abusive man’s show-business career—and bring much-needed justice to his victims.

As Good as Dead by Holly Jackson (Delacorte, Sept. 28): This final entry in a trilogy reunites readers with aspiring investigative journalist Pippa Fitz-Amobi, who took a plunge into true crime by investigating a missing student from her high school. She started a popular podcast and continued solving mysteries—and now she’s being targeted by a stalker, amping up the stakes and the personal danger.

Chasing the Truth: A Young Journalist’s Guide to Investigative Reporting by Jodi Kantor and Megan Twohey, adapted by Ruby Shamir (Philomel, Sept. 14): The young readers’ adaptation of She Said (2019) looks at the co-authors’ groundbreaking investigations of Harvey Weinstein, focusing particularly on the testimony of actor Rose McGowan. The book shows journalists’ working methods and encourages greater appreciation for their critical work.

Tell It True by Tim Lockette (Triangle Square Books for Young Readers, Sept. 28): Alabama high schooler Lisa didn’t plan to shake things up, but when she helps her best friend by becoming editor of the paper, her probing questions shape a student government election. She also puts herself in the national spotlight by doing a story on capital punishment and applying to attend an execution.

Not Here To Be Liked by Michelle Quach (Katherine Tegen/HarperCollins, Sept. 14): It’s not all fun and games on the school paper: Eliza Quan has the talent and experience and fully expects to be elected editor-in-chief. So when a popular school jock suddenly decides he wants in—and beats her out for the coveted role—Eliza uses her skill with words to fight back by writing an essay on gender bias.

Enduring Freedom by Trent Reedy and Jawad Arash (Algonquin, May 18): In this novel that reflects contemporary headlines, two young men bond in Afghanistan. Teenage Baheer is terrified by the Taliban and hopes to practice English and connect with U.S. soldiers. Joe is from Iowa, a young National Guard member who dreams of becoming a journalist. Remarkably, the co-authors met in the same way as their protagonists.

What’s Not To Love by Emily Wibberley and Austin Siegemund-Broka (Viking, April 20): This fun romance features two overachieving rivals—Alison (editor-in-chief of the school paper) and Ethan (school reporter)—who fall for each other despite themselves. A bit of social engineering by the principal forces them to cooperate on a project, paving the way for love.