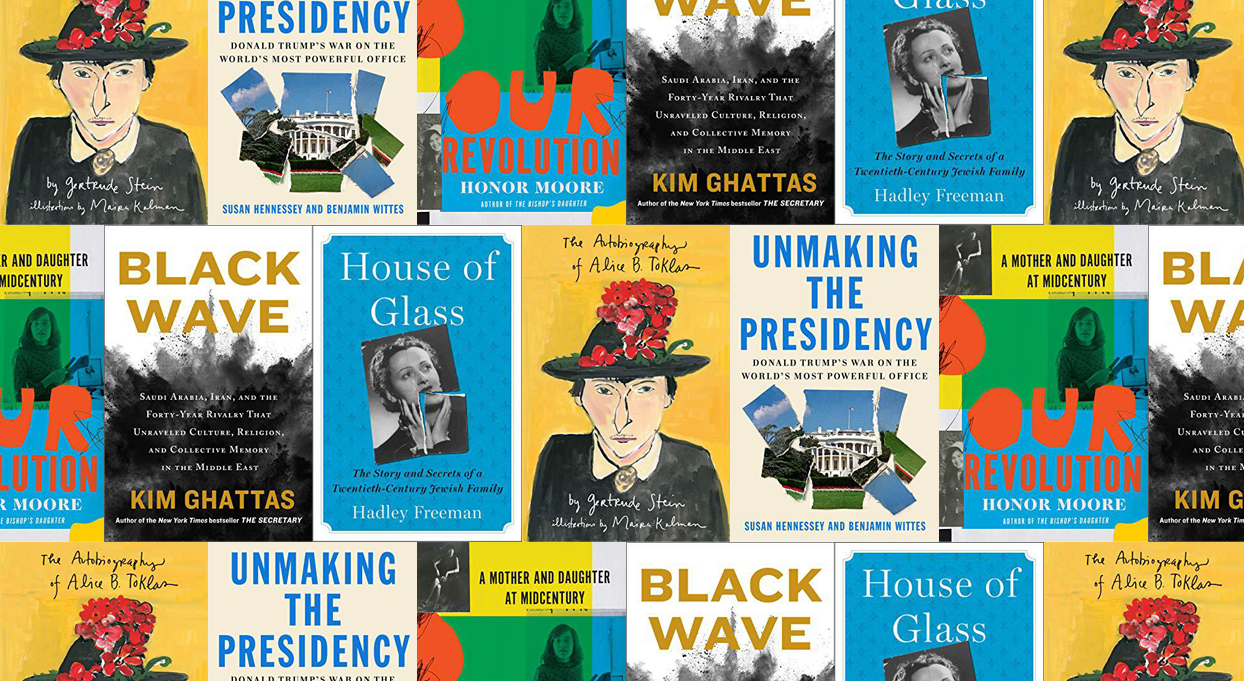 If the observance of International Women's Day yesterday inspired you to read more books by women, here are some early 2020 stars by women writers:

Hadley Freeman, House of Glass (Simon Schuster, March 24): In an impressive work of familial investigation, the Guardian columnist excavates decades of her family’s history throughout the Holocaust era. Some of her family members escaped to France and America, but some remained, and one died in Auschwitz. Our reviewer writes, “The author provides thrilling tales of escape, near misses, arrests, deportations, resistance, and betrayals. After the war, members of the family stayed in France but never forgot the way some of their French neighbors had eagerly denounced Jews to the Nazis. Freeman made a host of other astonishing discoveries, [including the fact that] one sibling became friends with Chagall and Picasso.” Ultimately, the author provides a hybrid memoir/history that is “frightening, inspiring, and cautionary in equal measure.”

Kim Ghattas, Black Wave (Henry Holt, Jan. 28): Ghattas, a journalist born in Beirut, digs deeply into the chaotic political atmosphere of the Muslim world. The author’s incisive account focuses on “three events of the same year, all tightly linked: the overthrow of the shah and the revolution in Iran, the Soviet invasion of Afghanistan, and the attack on the Grand Mosque of Mecca by Saudi militants.” Whether chronicling the Iranian Revolution, Saddam Hussein in Iraq, or the machinations of Iran and Saudi Arabia, the author shows one thing definitively: “Wherever Americans have been involved, the aftereffects have been worse, whether attacking Iraq in 1991 and 2003 or attempting to shift the balance of power in the Middle East, with the bumbling of the current administration enabling such things as the savage murder of dissident Saudi journalist Jamal Khashoggi. The headlines from the Middle East make a little more sense through the lens Ghattas provides.”

Susan Hennessey and Benjamin Wittes, Unmaking the Presidency (Farrar, Straus and Giroux, Jan. 21): In one of the more memorable portraits of the disastrous Trump administration, Hennessey and Wittes clearly demonstrate the rapidly deteriorating integrity of the presidency. “The authors,” wrote our reviewer, “effectively tap a wealth of material, including administration leaks, comments from ex-staffers, and Trump’s own words….If the presidency is beginning to look like an autocracy, it is because Trump has assumed the power to protect the guilty while cultivating impunity for and from friends.” It’s a disturbing drama that continues to deepen on a daily basis.

Honor Moore, Our Revolution (Norton; March 10): In her latest book, poet Moore focuses on her mother, Jenny McKean, using letters, scrapbooks, interviews, and Jenny’s unfinished memoir to create “a sensitive portrait of a complex, contradictory woman.” Though she grew up wealthy, she eventually worked with her husband, who became a priest, to alleviate the poverty in the slums of Jersey City, “where they lived in near poverty and, influenced by the Christian radical Dorothy Day, threw themselves ‘into a life of service, away from the spiritual emptiness and lack of community in which they had grown up.’ ” Not only an instructional portrait of the women’s liberation movement bursting into American culture in the 1970s, this is also “a deeply insightful, empathetic family history.”

Gertrude Stein, The Autobiography of Alice B. Toklas Illustrated; illustrated by Maira Kalman (Penguin Press, Mar. 3): Our reviewer describes this delightful project succinctly: “Whimsical illustrations meet quirky prose in this tag-team reinvention of the iconic 1933 book.” Teamed with the drawings of Kalman, the New Yorker magazine staple, Stein’s odd classic truly comes alive. Though not every page contains images, “Kalman’s 70-plus color illustrations, rendered in her distinctive playful and Fauve-esque style, perfectly reflect the artistic and intellectual world of Paris in the 1920s and ’30s.” No question, for Stein fans, and others interested in the rich culture of the time, this is “a sparkling, imaginative rendition of a literary classic.”