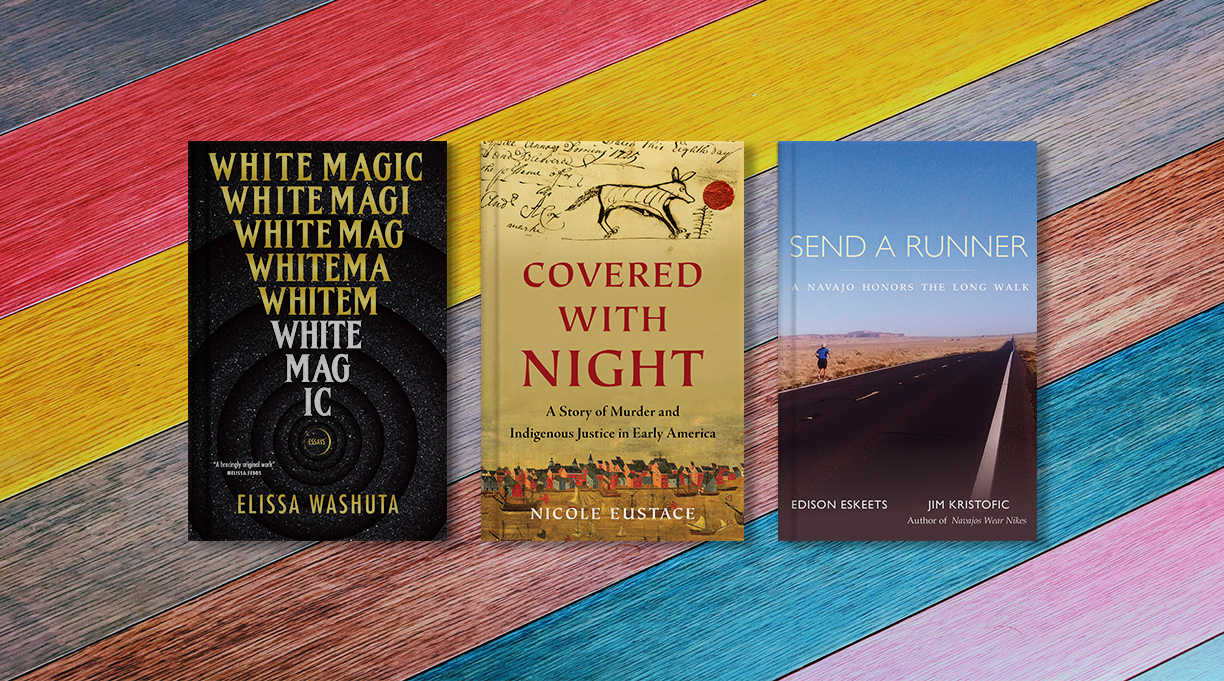 The confirmation of Debra Haaland as secretary of the interior represents a monumental milestone: She is the first Native Cabinet secretary in United States history. As an enrolled member of the Laguna Pueblo tribe and a 35th-generation New Mexican, she was also one of the first Native members of Congress. Given her clear, dedicated focus on protecting many of our country’s most treasured lands, I look forward to her plans for the next few years. In her honor, here are three illuminating April books about Native history and culture.

Send a Runner: A Navajo Honors the Long Walk by Edison Eskeets and Jim Kristofic (Univ. of New Mexico, April 1): Artist, runner, and coach Eskeets teams up with Kristofic, a Taos-based journalist who grew up on a Navajo reservation in Arizona, to present the “story of a 59-year-old Diné (Navajo) man and his 16-day, 330-mile run to honor the Long Walk of the Navajo.” Two alternating narrative threads emerge: “first, Eskeets’ plan to run 330 miles (‘a marathon a day’) to commemorate the Long Walk, ‘the forced removal of most of the Diné people to a military-controlled reservation on the Pecos River in south-central New Mexico’ between 1864 and 1868; second, a chronicle of the Long Walk in historical context.” It’s a tale that may be unfamiliar to many non-Native readers, making this slim yet powerful book even more valuable. “With starkly beautiful prose,” writes our critic in a starred review, “the authors bring all of this to urgent life, vividly depicting the numerous outbreaks of brutal violence and clearly demonstrating the remarkable resiliency of the Diné.”

Covered With Night: A Story of Murder and Indigenous Justice in Early America by Nicole Eustace (Liveright/Norton, April 27): In this “complex tale of a now-forgotten crime that shaped Native-White relations in the British Colonies of North America,” NYU history professor Eustace situates readers firmly in a riveting tale of true crime from 1722, a story that involves fur trading, treaty agreements, clashes between the Iroquois Nation and the “mendacious” Colonial governments of Pennsylvania and Maryland, and “a vivid cast of characters that expands to include a shrewd go-between named ‘Captain Civility,’ who spoke all the languages of the Susquehanna River Valley and embodied the Indigenous tradition ‘of assigning a person to take up membership in multiple communities, serving as the living embodiment of civil society.’ ” As our critic notes in a starred review, “the story has countless moving parts and one central mystery that demand subtle exposition, and Eustace navigates it all with skill and economy,” resulting in “a fine contribution to the literature of Colonial America, where peace was far harder to achieve than war.”

White Magic: Essays by Elissa Washuta (Tin House, April 27): In this standout sophomore book, Washuta, a Cowlitz woman, builds on the promise she demonstrated in her debut, My Body Is a Book of Rules, which we called “a fever dream of darkly personal memories and musings from the shadowy corners of sexual violence and mental illness.” White Magic, our critic notes in a starred review, is “a fascinating magic trick of a memoir that illuminates a woman’s search for meaning.” The 10 essays in the book interweave beautifully as the author “investigates the connections among magic, witchcraft, and her Native heritage,” digging through pop-culture signposts to help her navigate her journey of self-identity. “Throughout, Washuta is consistently honest about her own past and opinions, and she is unafraid to directly question readers, demanding engagement with the text.”