11 Nonfiction Books To Read This Fall 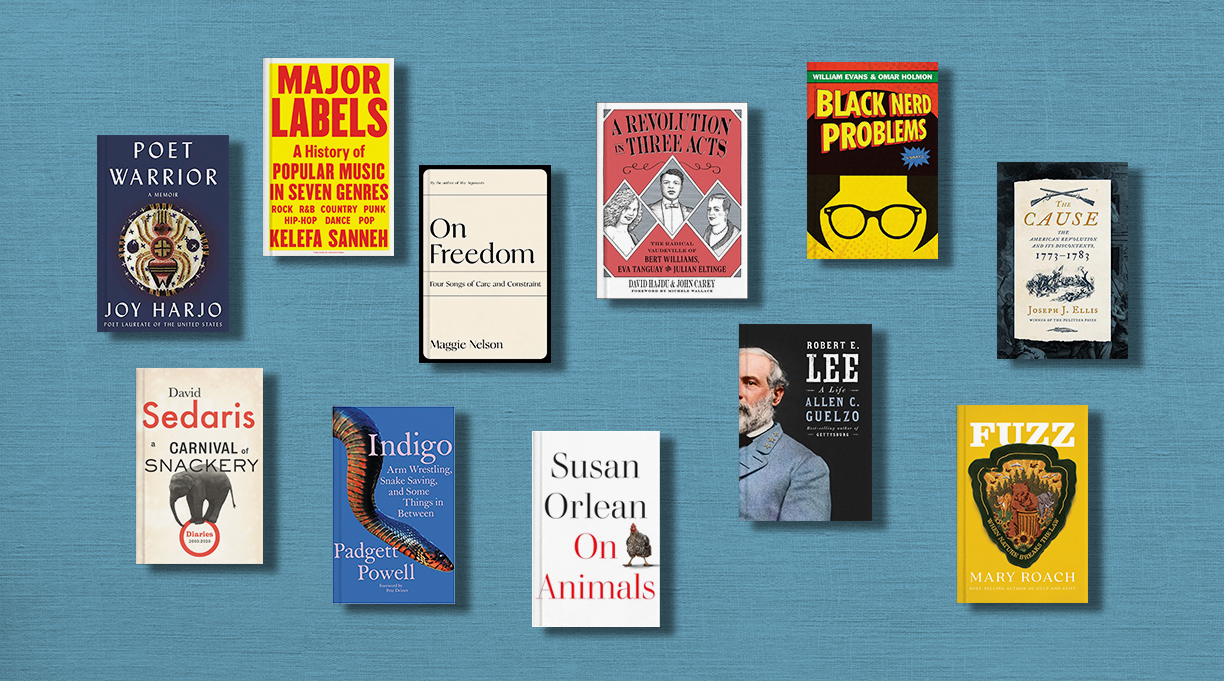 Background image by Kiwihug on Unsplash

Anyone in the book publishing industry knows that the busiest seasons are spring and fall, and I usually find fall to be the most active—especially this year, since so many books were postponed due to the pandemic. Given the glut of books with publication dates between September and November, this year’s Fall Preview selection process may have been the most difficult ever. As in previous years, I did my best to curate a list that is diverse across authors, subject matter, and publisher, featuring a nice mix of veteran favorites and promising newcomers.

Regarding the veterans, you will find exciting new work from some of our most revered writers, including David Sedaris, Mary Roach, Allen C. Guelzo, Susan Orlean, Maggie Nelson, Joseph J. Ellis, Padgett Powell, David Hajdu, and Joy Harjo. Those names alone could keep most readers satisfied for a couple months. However, as any of my colleagues would tell you, one of the most invigorating aspects of working at Kirkus are the surprises, whether it’s a debut author exploding on to the scene or someone embarking on a bold new project. You’ll find both here.

For example, it’s hard to believe that Kelefa Sanneh, the stalwart New Yorker contributor, is a first-time author. Though his writing has appeared in various journals and a handful of books, Major Labels: A History of Popular Music in Seven Genres (Penguin Press, Oct. 5) is his debut book—and what an accomplishment it is. In a starred review, our critic writes, “a lively, heartfelt exploration of the many worlds of popular music.…Throughout, the author shows himself to be a master of the mot juste.…[It’s] clear that he’s listened to just about everything with ears and mind wide open. A pleasure—and an education—for any music fan.” Sanneh deftly assesses the last 50 years of popular music, weaving among rock, RB, country, punk, hip-hop, dance music, and pop to demonstrate the power of music to unite, divide, inspire, and move. The book is an absolute must for any music nerd, and even casual listeners will discover a feast for the ears and mind, regardless of their musical taste.

Speaking of nerds, allow me to introduce two of the self-proclaimed variety: William Evans and Omar Holmon, whose debut book, Black Nerd Problems (Gallery Books/Simon and Schuster, Sept. 14) builds from their popular website of the same name. I’ll be the first to admit that books originating from websites or blogs are often disappointing, but this one is an unquestionable success. Our starred review notes “Evans and Holmon examine a broad swath of the popular-culture landscape, from anime and video games to comic books and movies, mixing social commentary and insight with the sheer love of the true fan.…The book’s format, switching between the two authors and including essays that work as dialogues, offers the sense of hearing conversations between best friends.” The authors’ vibrant voices play off each other in a consistently appealing way, whether they’re riffing on “lighthearted material, such as an excellent essay that describes how Mario Kart shows you exactly the kind of person you really are,” or dealing with more serious matters that are often overlooked in pop-culture criticism—for example, “the [essay entitled] ‘Sobering Reality of Actual Black Nerd Problems,’ which focuses on the effect of ‘violence against black men and boys,’ or passages about finding respectful characters of color in children’s programming like Craig of the Creek or the Legend of Korra.”

Whether you are looking forward to the latest book from your favorite author or eager to uncover a hidden gem, it’s all here in the Fall Preview. Enjoy!