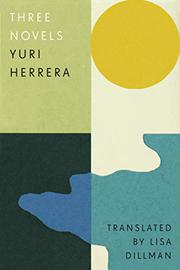 The Mexican postmodernist, heir in equal parts to Cormac McCarthy and Juan Rulfo, delivers a hallucinatory study of his country in this omnibus.

Herrera shuns proper names of people and places: Mexico City is the “Big Chilango,” characters bear names such as the Artist, the Witch, and Mr. Q. His ghostly landscapes are reminiscent of Rulfo’s in the iconic novel Pedro Páramo, but his characters are even more ethereal. Many are up to no good, delivering packages whose contents we can only guess at, trying to avoid falling into vast sinkholes and the jails of La Migra. The bad guys speak as if in a Peckinpah film; says one, before putting a hole in a wobbly drunk, “I don’t think you heard a thing. You know why? Because dead men have very poor hearing.” One of Herrera’s central preoccupations is with finding a language to convey the strangeness of our time and, failing that, falling into silence. That language can be knotted and slangy, as when a character called the Girl says in the first novel, Kingdom Cons, “It’s amped here, singer, it’s trick as shit; man, it’s all sauce; it’s wicked, slick, I mean this place is tight; people here come from everywhere and everybody’s down.” The other two novels in this loosely knit trilogy, Signs Preceding the End of the World and The Transmigration of Bodies (the latter a neat play on the Catholic concept of the transmigration of souls and playing again on the dangerous border between two nameless nations), are published in the order in which Herrera wrote them. They’re even more powerful read together, with their nightmare scenes of a Mexican boy who, as in the Civil War, steps in to do military service in the U.S. for a rich kid and of nouveau-drug-rich people who remain in their poor neighborhood: “they just added locks and doors and stories and a shit-ton of cement to their houses, one with more tile than the other.”

A welcome gathering of centrifugal works by one of Mexico’s most accomplished contemporary writers.