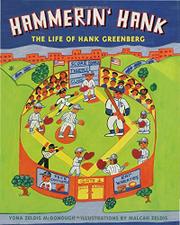 The Life of Hank Greenberg

Hank Greenberg was not the first Jewish baseball player in the major leagues, but he was perhaps the first star ball player who was Jewish, and certainly the first elected to the Baseball Hall of Fame. All through his career he faced anti-Semitism in many forms, including epithets and threats, from bigoted fans, other players and team owners. He remained observant and refused to play on Yom Kippur even though his team, the Detroit Tigers, was fighting for the pennant. He stated many times that he identified with Jackie Robinson, and he was one of the few opposing players who supported him openly from the beginning. McDonough’s dispassionate retelling of Greenberg’s biography carefully includes all the salient facts, and a few pertinent quotes. Zeldis’s naïf, detailed gouache illustrations are bright and childlike and provide a complementary focus for the text. A good introduction to a somewhat neglected baseball player. (statistics, chronology, glossary, bibliography) (Picture book/biography. 8-10)