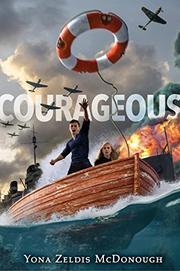 Twelve-year-olds Aidan and Sally sail a tiny fishing boat across the English Channel and risk their lives rescuing trapped Allied soldiers from Dunkirk.

Aidan’s parents initially refuse to join the mission, claiming one son was enough to sacrifice to the war, but Aidan is determined. He and his friend Sally commandeer his parents’ boat and set sail across the English Channel, hoping to rescue his brother, George, and the other trapped soldiers from the advancing Axis troops. A missile breaches the hull, but spare lifejackets stuffed into the hole keep them afloat. Insufficient fuel, enemy planes, and the smoke-filled air further threaten their journey, but Aidan and Sally finally make the shore. They manage to ferry dozens of soldiers to waiting rescue ships, but George is nowhere to be found. Scenes alternate between the drama on the water and the desperate conditions on land. While the gore is kept to a minimum, death, injury, and peril are constant; despite this, however, the story lags. A glossary, a timeline of the rescue, and a brief overview of the war are included to give context. Aidan and Sally are brave, and the soldiers are honorable, making for a sympathetic cast—no characters of color are among it though, despite the presence of Indian troops at Dunkirk, making it an all-white one.

A mostly historically accurate, though not terribly engaging retelling of Operation Dynamo.