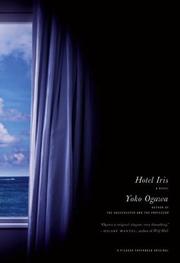 A young Japanese hostess becomes the object of a dangerous man’s obsession.

Minimalist Ogawa (The Housekeeper and the Professor, 2009, etc.) trades the eccentric relationships of her debut novel for a much darker affair in her latest plumbing of human experience. In an overgrown inn in a sedate seaside town, 17-year-old Mari tries to keep the peace between the customers and her abrasive mother. She’s startled one night when her family has to eject a customer for abusing a local prostitute. But the town is too small not to notice the man, and soon Mari strikes up a conversation with the guy, a translator of Russian novels. Their written correspondence is charged and soon so is their sadomasochistic relationship, captured in Ogawa’s arid prose. “In this room where everything was arranged in perfect order—from the dish cupboard and bedspread to the desk and the tiny characters in the notebook—I was an affront to order,” says Mari. “My dress and underwear were strewn about, my ugly body was draped over the couch. Reflected in the glass, I looked like a dying insect, like a chicken trussed up in the butcher’s storeroom.” It’s a disturbing tale, made no less so by the rumors and intimations that the translator is hiding in the small village because he killed his wife. But the icy girl keeps her silence. “The lies came to me much more easily than I would have imagined, and I felt no guilt at all,” she says. But eventually Mari’s lies to her parents about her bruises and absences start not to hold water. Ogawa diverges from her primary story near the end with an equally odd interlude between Mari and the translator’s mute nephew, but a sorrowful and artful ending wraps up the girl’s story, though not neatly.