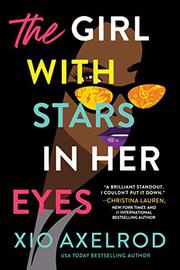 THE GIRL WITH STARS IN HER EYES

Antonia Bennette spent her early childhood traipsing through the back rooms of clubs with her struggling-musician mother, Mary, watching as she lost herself to seedy club owners and a gambling addiction. That is, until Antonia was shipped off to live with Mo, the father she'd never met, who turned out to be an emotionally abusive bar owner in the middle-of-nowhere town of Bordon, Pennsylvania. If Antonia’s childhood wasn’t all bad, it was thanks to Sebastian Quigley. The two teens bonded over a shared a love of music and big dreams of escaping Bordon for good. But it’s been years since Seb left town and never looked back. Now Antonia, known publicly as Toni B, is a 25-year-old playing open-mic nights at a Philadelphia dive bar, and Seb is managing the members of breakout girl band The Lillys. When Seb fails to stop their guitarist from partying long enough to focus on the band’s big showcase, the group decides to teach her a lesson by temporarily replacing her. And Philly phenom Toni B is at the top of their list. Now Seb and Toni must put their differences aside to get what they want—for Seb, his band’s success; for Toni, enough money to buy into a studio and make her dream of producing music a reality. But they both know that the road to stardom never did run smooth, and their pasts are closer than they think. Axelrod prefers pages of internal monologue to a fast-moving plot, which makes for a repetitive reading experience. The characters are interesting, though, as is the author's deft take on the modern music industry.

A sweet story of found family and the power of music.