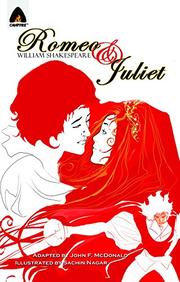 From the Campfire Classics series

Using modern language, McDonald spins the well-known tale of the two young, unrequited lovers. Set against Nagar’s at-times oddly psychedelic-tinged backgrounds of cool blues and purples, the mood is strange, and the overall ambiance of the story markedly absent. Appealing to what could only be a high-interest/low–reading level audience, McDonald falls short of the mark. He explains a scene in an open-air tavern with a footnote—“a place where people gather to drink”—but he declines to offer definitions for more difficult words, such as “dirges.” While the adaptation does follow the foundation of the play, the contemporary language offers nothing; cringeworthy lines include Benvolio saying to Romeo at the party where he first meets Juliet, “Let’s go. It’s best to leave now, while the party’s in full swing.” Nagar’s faces swirl between dishwater and grotesque, adding another layer of lost passion in a story that should boil with romantic intensity. Each page number is enclosed in a little red heart; while the object of this little nuance is obvious, it’s also unpleasantly saccharine. Notes after the story include such edifying tidbits about Taylor Swift and “ ‘Wow’ dialogs from the play” (which culls out the famous quotes).