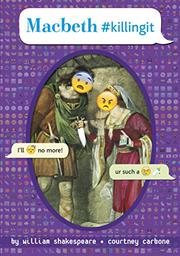 From the OMG Shakespeare series

Carbone continues her lively updating—or heretical butchery, depending on your point of view—of Shakespeare's plays.

Having previously brought into the 21st century/slaughtered Hamlet and Romeo and Juliet (srsly Hamlet and YOLO Juliet, both 2015), Carbone now turns to the Scottish play. "When do u witches wanna meet up next?" asks "witch #1" in a group text with her sisters. This sets the tone for the rest of the adaptation, which plays out in emoji-bedazzled text bubbles, supplemented by notifications, Facebook updates, notes, chat-room screenshots, and reminders ("12:00am / Time to kill Duncan"). The dialogue is a mix of kinda-Shakespearean rebuses and textspeak: after the murder, Macbeth frets, "All the [water emoji] in the [Hokusai-wave emoji] could not wash the blood off my [two-hands emoji]. I [ear emoji] knocking on the [door emoji]. some1 is comin to get me!" It's all ridiculous of course, but there's a method to its foolishness. Many conventions of the medium adapt surprisingly well: asides are rendered as undelivered texts, and stage directions are Foursquare updates. Rather than (just) pandering to its presumed teen audience, it provides a lens through which students can see dramatic possibilities. A Midsummer Night #nofilter publishes simultaneously.

Theater in general and Shakespeare in particular are notably protean, and the potential of this and its companions to inspire students to think outside the Globe is significant.