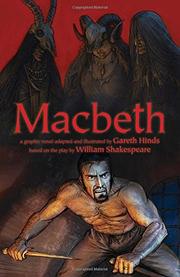 Having previously interpreted The Merchant of Venice (2008), King Lear (2009) and Romeo and Juliet (2013), Hinds turns his pencil to the Scottish Play.

In a palette that alternates between gloomy Highlands grays, greens and blues and firelight russets that modulate easily to blood, Hinds evinces a medieval Scottish setting, giving his graphic-novel production a traditional feel. Macbeth is darkly Celtic, Lady Macbeth a Gaelic redhead and Banquo a burly Norseman, neatly capturing Scotland’s ethnic mix. From an opening spread that combines a map and dramatis personae, the action plays out in Hinds’ characteristically clean and thoughtful panels, with Shakespeare’s language largely intact. Many lines have been cut, but those that remain preserve the feel of the original in diction and syntax, only a few words judiciously massaged. Perhaps the biggest change—the recasting of much of the play’s iambic pentameter into speech-bubble–friendly prose—is aurally almost indistinguishable from the original. Scenes that rely on acting rather than dialogue to carry meaning, such as Banquo’s murder, unfold lucidly, although the porter scene may mystify more than it amuses, Shakespearean humor being particularly reliant upon acting for its success. Copious backmatter, including seven pages of notes explaining various artistic and directorial choices, provides fascinating insight and will be particularly valuable in a classroom setting.

An adaptation both respectful and daring that should please all but the most ardent traditionalists.