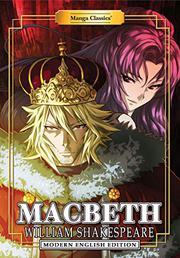 From the Manga Classics series

This is a modern-language counterpart to the series’ 2018 manga adaptation of Macbeth that preserved the original text. Choy’s black-and-white manga-style artwork is crisp and dynamic, suiting the martial moments but also adeptly portraying characters’ internal struggles. The sharp lines and claustrophobic close-ups capture Macbeth’s journey from loyal liege to unhinged tyrant. Disappointingly, the less nuanced portrayal of Lady Macbeth relies on a literal interpretation of her lines. In a mostly successful attempt to illustrate and explain Elizabethan analogies, Macbeth’s abundant allusions, metaphors, and similes are translated into background imagery. Regrettably, the accompanying, modernized dialogue ultimately detracts from the retelling. The cadence and language of the original text is lost, sacrificed for an unappealing blend of stilted formal English and clichéd phrases. Converting a Shakespearean play to a popular, visual, modern medium may attract new audiences otherwise daunted by archaic language, thick tomes, and impenetrable theatrical productions, but the new dialogue has its own biases and interpretations that may escape readers unfamiliar with other approaches to understanding the play. No Throne of Blood, the medieval-ish Scottish setting remains intact, and the characters read as White.

A modernized Macbeth for manga fans, but the Bard deserves better.