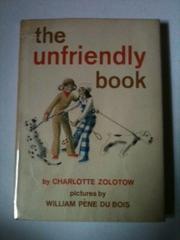 This is an argument between Judy, one of those sunny types with lots of friends who has nothing but good to say about anyone, and Bertha, who thinks she is Judy's best friend and doesn't want Judy to play with the others. After Judy replies to Bertha's faultfinding (Marilyn's teeth stick out, Mary is dumb, etc.) with a defense of each girl under fire, Bertha accuses Judy of liking everyone — whereupon Judy, in an uncharacteristically unfriendly ending for Zolotow, counters with "No, I don't like everyone. In fact, I don't like you." The two types are admittedly recognizable (though to us equally irritating) but the specifics are not always convincing — it's almost as hard to credit Jean being rejected because her eyes are too close together as it is to believe Marilyn's appeal being that "she knows more poetry by heart than anyone I ever knew." William Pene du Bois provides a semblance of action by equipping the two stylishly pants-suited little girls with two equally stylish dogs on leashes who pull and tug their mistresses every which way throughout the exchange — but this remains an undisguised if smartly dressed up object lesson.