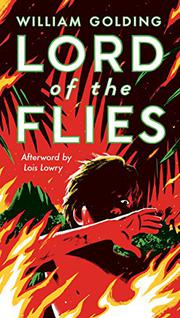 LORD OF THE FLIES

A fantasy is a singular - and singularly - believable spellbinder, and within the framework of its premises achieves a tremendous impetus and impact. During an atomic war, a group of boys aged from about six to twelve crash-land on an uninhabited tropical island. There Ralph, a responsible boy, is chosen chief and a certain routine established; a fire is made and to be kept going as a signal, huts are to be built, and certain of the boys are to hunt wild pig. But as the days pass in increasing discomfort, there is increasing dissension between them; the "littluns" are frightened by the untold terrors of the dark, and the fear of beasties and bogeys spreads; the duties are neglected; and the older boys, save Simon and Piggy and Samneric (twins) desert Ralph, appoint a new leader, and run amok hunting savagely. In their primitive regression, they feel they must propitiate the beast and a ritualistic dance precedes the murder of Simon; Piggy, his specs taken, falls to his death; and finally Ralph is left to face the pack when a cruiser lands to rescue them all.... A first novel, originally conceived and convincingly sustained, this should find an audience as vulnerable as its young derelicts. The publishers parallel this - not without justification - with Richard Hughes' High Wind In Jamaica.