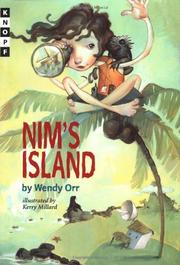 A child finds that being alone in a tiny tropical paradise has its ups and downs in this appealingly offbeat tale from the Australian author of Peeling the Onion (1999). Though her mother is long dead and her scientist father Jack has just sailed off on a quick expedition to gather plankton, Nim is anything but lonely on her small island home. Not only does she have constant companions in Selkie, a sea lion, and a marine iguana named Fred, but Chica, a green turtle, has just arrived for an annual egg-laying—and, through the solar-powered laptop, she has even made a new e-mail friend in famed adventure novelist Alex Rover. Then a string of mishaps darkens Nim’s sunny skies: her father loses rudder and dish antenna in a storm; a tourist ship that was involved in her mother’s death appears off the island’s reefs; and, running down a volcanic slope, Nim takes a nasty spill that leaves her feverish, with an infected knee. Though she lives halfway around the world and is in reality a decidedly unadventurous urbanite, Alex, short for “Alexandra,” sets off to the rescue, arriving in the midst of another storm that requires Nim and companions to rescue her. Once Jack brings his battered boat limping home, the stage is set for sunny days again. Plenty of comic, freely-sketched line drawings help to keep the tone light, and Nim, with her unusual associates and just-right mix of self-reliance and vulnerability, makes a character young readers won’t soon tire of. (Fiction. 10-12)