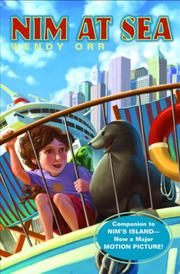 “In a palm tree, on an island, in the middle of the wide blue sea, is a girl.” Orr opens both Nim’s Island (1999) and this equally winning sequel (published to coincide with the release of the prequel’s film version) with the same lines—but this time takes her plucky protagonist to a very different island, halfway around the world. Chasing poachers who have snatched her beloved sea lion Selkie, Nim stows away aboard a cruise ship where she finds both a whole menagerie of captives and herself among other children for the first time. Meanwhile, deciding (wrongly) that she’s intruding, Alex (aka Alex Rover, renowned but seriously shy author of bestselling adventure novels) heads back to her native New York without a word to Nim’s dad Jack, who is so frantic at everyone’s sudden disappearance that he sets out aboard a raft for the nearest, but still distant, town. Casting Nim, Jack and Alex into adventures that are exciting but never more than briefly scary, the author expertly shepherds the impulsive trio all the way to the Big Apple—lacing the separate voyages with just-missed meetings and unreceived e-mail messages, and building up to a comically tumultuous climax, rescue and loving reunion. Millard’s occasional sketches add pitch-perfect notes of light suspense and humor. (Fiction. 10-12)