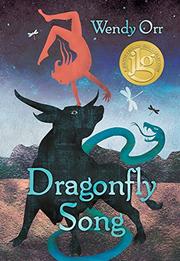 When Aissa is born with tiny, pink thumbs wiggling from her wrists, the Lady, her mother, is furious. Why have the gods forsaken her, the Lady wonders. Unable to bear the imperfection of her child, she demands that the wise-woman Kelya take the child and toss it off a cliff. Kelya cannot do it, however, and instead places the babe with a family that has just lost a newborn. Thus begins the arduous journey of a child forced to survive by her wits, who seems doomed to suffer loss after loss. Orphaned a second time and now a nameless servant in the palace, now-12-year-old Aissa sees opportunity in being chosen a bull dancer, one of the yearly sacrifices to the Bull King—but without a name, she cannot be chosen. Orr tells her tale in both narrative poetry and prose for an effect that is both fanciful and urgent, drawing a rich fantasy landscape filled with people and creatures worthy of knowing. An introductory note describes Orr’s inspiration in the legend of the Minotaur, but her story is no retelling but a meditation on rejection and acceptance, on determination and self-determination. The shifts between poetry and prose build tension just as surely as the bull dances do.

As mesmerizing as a mermaid’s kiss, the story dances with emotion, fire, and promise