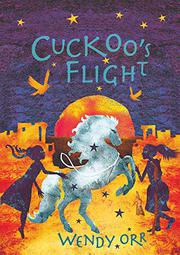 Orr returns to the Bronze-Age Mediterranean.

When Clio sneaks away from the kilns to check on her pregnant mare, Gray Girl, she catches a glimpse of a black raiding ship in the sea. Though the ship, apparently on a training run, turns around, Clio realizes that raiders are closer than anyone realized; attack is likely once the seasons change. The Lady, or village priestess, consults the oracle, then demands that not only should the trading ships leave earlier this year, to bring back more tin and copper for making bronze, but also, a maiden should be sacrificed at the spring fair. One of Clio’s aunts was similarly sacrificed long ago, and Clio is certain she will be chosen this time. Clio’s and her father’s love for their horses puzzles the village people who see horses as far less useful than oxen and goats. Clio herself has a permanently stiff, twisted leg from falling off Gray Girl, but her father makes her a chariot like those from his native Troy—and the horses prove their worth when the raiders arrive. Told mostly from Clio’s point of view, the novel slides effortlessly between prose and poetry. It may take readers a few pages to enter the unfamiliar world, but the engaging storyline and characters make it worth their while. Most impressive is Orr’s ability to translate a worldview vastly different from our own.