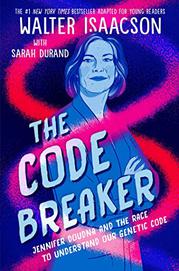 Jennifer Doudna and the Race To Understand Our Genetic Code

by Walter Isaacson with adapted by Sarah Durand

Substantial discussions of gene tailoring’s promise and thorny ethical quandaries expand this story of how researchers discovered a mechanism that bacteria use to “remember” and nullify attacking viruses and how they have leveraged it with maladies from sickle cell anemia to Covid-19. The work centers pioneering researcher Doudna—tracing her Nobel Prize–winning achievements but also situating her in a teeming international community of fellow researchers whose relationships are fueled by a fizzy mix of egos and altruism. Young readers may be more interested in Doudna’s discoveries than the details of a midlife existential reckoning or a fence-mending web chat with a formerly close colleague. But along with some photos, there are vivid word portraits of her as well as fellow scientists, from James Watson (“difficult and complicated”) to He Jiankui, whose “thirst for fame” led in 2018 to his inserting genomic alterations into viable human embryos. That episode demonstrated that we actually can “hack evolution,” for better or worse: “It’s good that some people have strong opinions about gene engineering in humans, but it’s even better if you know what a gene actually is.” If some passages read like acronymic word salad, the whole package offers a stimulating and topical case study in how rewarding science can be when it’s “letting data dance with big ideas.” An index and resource list would have been helpful.

Ambitious in scope; a distinctively nuanced picture of modern science in action.